One of the oldest shisa on Okinawa has its home in Kitanakagusuku’s Kishaba Park, where it was moved from its original location in n1983. It was built to protect the village against evil spirits and disasters coming from a hill called Kanisan. 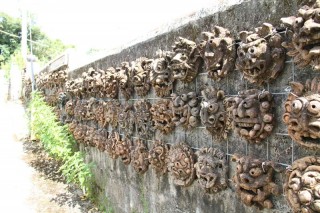 A wall of shisa faces, of which not two are alike, adorns a quiet side road.

The two villages are nearby each other on the east-central side of Okinawa. “Kita” means north in Japanese, and that’s why Kitanakagusuku means north Nakagusuku. You might heard about Nakagusuku Castle Ruins, which are registered as a World Heritage Site, and yes, because of those two villages being related to Nakagusuku castle ruins, there is still such a village name.

Nakagusuku ruins are located in both Nakagusuku and Kitanakagusuku Villages right now, but there was just one Nakagusuku until after World War II. After the war, 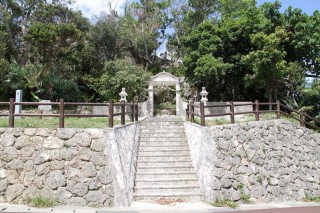 Nasu-no Utaki shrine dates back to the Ryukyu Kingdom days.

the U.S. Military built a military facility at the middle of the municipality, and the people and government of the village really found it hard to handle a divided community. Then, 12 administrative areas decided to exit from Nakagusuku Village and founded the new village in 1946 that became Kitanakagusuku, just one year after the end of the war.

This is the story of how Kitanakagusuku was born. Almost 60 years later, there was a big municipality merger campaign in Okinawa, and new entities such as Nanjo City from combined Sashiki, Chinen, 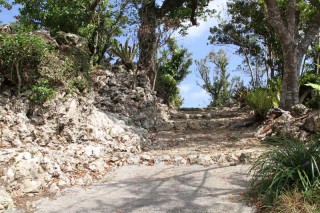 There are many ancient stone step and paths in the area.

Takagusuku and Ozato, and Yaese Town from Kochinda and Gushikami, and others were born. At that time Nakagusuku and Kitanakagusuku almost merged back to one administrative area, but the effort failed because of Kitanakagusuku’s rejection of the plan by a majority decision.

Kitanakagusuku has the highest density of population in Japan, although the area of Kitanakagusuku is not so large.  Kitanakagusuku is located on a hilltop and continuing to the ocean side, and that’s why hamlets of the community are a bit far away from each other. Significantly, there are many places where we can find plenty of historic places of the Ryukyu Kingdom era. And the view from the hilltop is amazing!

A visit to the area is recommended; there are great genuine Italian restaurants such as “Grand Blue”, EM Costa Vista Hotel and the Nakagusuku castle ruins park at the hilltop, where you can enjoy super spectacular views of the middle part of Okinawa. There one can also feel the atmosphere of the ancient Ryukyu Kingdom. The area of the hilltop where the Grand Blue restaurant or EM Costa Vista Hotel is located is a highclass residential area that people often refer to as the “Okinawan Beverly Hills”. 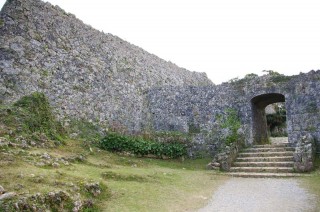 One of nostalgic historical spots near that area is “Nasu no Utaki” just 200 meters from the EM hotel.  It is a shrine where, according to a legend, the big rock at the backside of the shrine enshrines the “King Shunten” the first King of the Ryukyu Kingdom. His son “Shunbajunki” and grandson “Gihon” are also enshrined in the block.

There is another interesting story about the area. During the reign of Gihon, the 3rd king of Shunten Kingdom, who moved his court to Eiso, and became the founder of the Eiso dynasty, there were many natural disasters and widespread hunger. He felt sorry for his people and took it as his responsibility to improve their lot. Once he was lost while traveling in kingdom, the headman of Chunjun district (now one of the districts in Kitanakagusuku village) provided him shelter. That gave birth to one of the most popular Eisa songs called “Chunjun Nagari” that sings about this headman “Chunjun Uhunushi”.

There is one of the oldest Shisa in Okinawa in the Kishaba Park, located down the hill from the EM Costa Vista Hotel. Then there are many historical places like Nakamura House, a Designated National Cultural Property, many natural springs that were used in the Ryukyu Kingdom era, a village shrine, and more at the Ogusuku area. The area is best toured on foot. While there, don’t forget to visit Nakagusuku Castle ruins, as it is one of the World Heritage spots and famous its most beautifully constructed standing walls. Most people say Nakagusuku Castle was founded sometime in the 14th century but no one knows who built it first. Famous Chief Gosamaru added and improved the castle sometime in the 15th century. The story of Gosamaru in itself is most interesting and needs much more space to write, so we will introduce it another day. The Nakagusuku castle ruins offer superb views and provide a visitor a real sense of feeling of the Ryukyu Kingdom era.

The Sunflower Festival at Kitanakagusuku in the winter season is a well-known and gorgeous event, Ayakari-no Mori is an interesting public facility located near EM Costa Vista Hotel that offers library space (only village residents can borrow books, but everyone can use the space), as well as the dormitory space. There’s also a giant shopping and leisure complex under construction centered on an AEON Mall on the former Awase Golf Course site.

Kitanakagusuku Village is one of the more interesting districts of Okinawa.