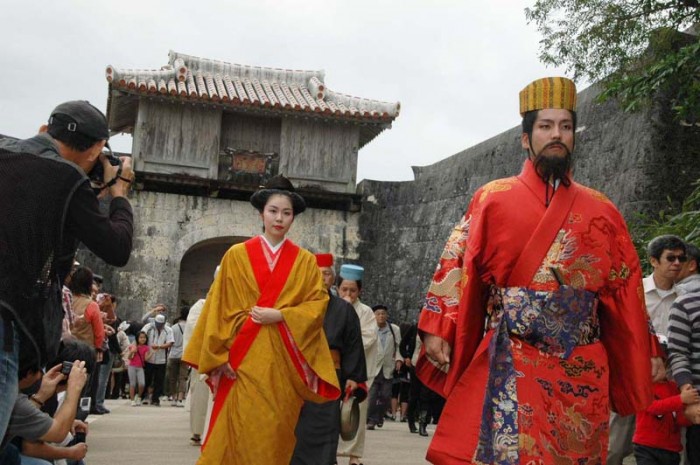 The Shuri Royal progression leaves the Shuri Castle while on-lookers snap photographs of the colorful spectacle.

The ancient Ryukyu Kingdom comes alive for the day Sunday as the Shuri Castle Festival parade takes place on the castle grounds before spilling out onto nearby streets. 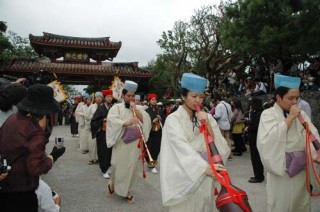 All costumes and even music instruments in the procession are exact replicas made according to old manuscripts.

The parade begins at 12:50 p.m., starting with a ceremony in the heart of Shuri Castle, the Seiden, continuing outside the castle to the Kankaimon, Shureimon, Ikehata three-forked road, the old Okinawa Prefecture Museum, Shuri community center and Torihori crossroads.   The 2½ – hour festival parade is open to the public.

The parade comes on the final day of the 10-day event, the festival’s highlight, presenting the Ryukyu King, as he did every year as a prayer for peace, security and a rich harvest. The parade is perfectly re-enacted according to documents left from Ryukyu

The procession goes through Shurei-no Mon

Kingdom. Every year, people are recruited to play the role of the King, Queen and other lead officials who worked for the King including the regent and official shaman.

A total of over 200 people participate, making it one of the most spectacular parades, something like a historical scroll painting coming to life. All instruments and clothing used in the ceremonies have also been impeccably recreated, giving the viewer a sense of going back in time and actually being in the Ryukyu Kingdom Era. 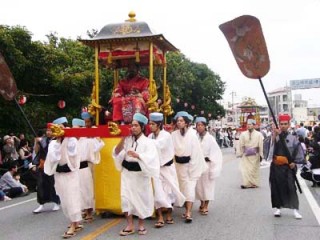 As in the past, the King travels in style.

In the 14th century, mainland Okinawa was unified into three principalities: Hokuzan (Northern Mountains), Chuzan (Central Mountains) and Nanzan (Southern Mountains). Also known as the Three Kingdoms period, these three principalities, or tribal federations, led by major chieftains, battled, and Chuzan at the end emerged victorious. King Hashi and his military forces from Chuzan conquered Hokuzan in 1416 and Nanzan in 1429, which was when the Ryukyu Kingdom became united for the first time, and founded the first Sho Dynasty. 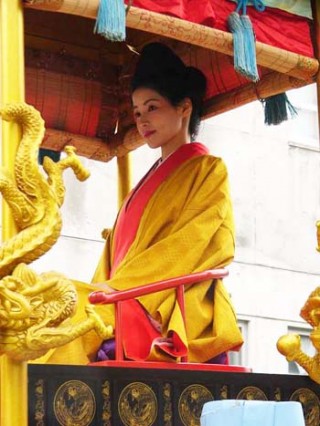 The queen is carried in her own palanquin.

system, built Shuri Castle and the town as his capital, and also constructed Naha harbor. The kingdom extended its authority over the southernmost islands in the Ryukyu archipelago by the end of the 15th century, and by 1571 the Amami-Ōshima Islands, to the north, near Kyūshū, were incorporated into the kingdom as well.

The date of Shuri Castle’s construction is uncertain, but it was clearly in use as a castle during the Sanzan period (1322–1429). It is thought that it was probably built during the Gusuku period, like the other castles of Okinawa. When King Sho Hashi unified the three sections of Okinawa and established the Ryukyu Kingdom, he used Shuri Castle as a residence. At the same time, Shuri flourished as the capital, and continued to do so during the second Sho dynasty.

According to records, Shuri Castle was burned down several times, but rebuilt each time. Before World War II, it was designated a national treasure. During World War II, the Japanese military set up its headquarters in the castle underground, and on May 25, 1945 during the Battle of Okinawa, an American battleship shelled it for three days. On May 27th, it burned. After the war, the University of the Ryukyus moved to the castle site, where it remained until 1975.

In 1958, the Shureimon gate was reconstructed and, in 1992, the main building of the castle was reconstructed. At present, the entire area around the castle has been established as Shuri Castle Park. In 2000, along with other gusuku and related sites, it was designated as a UNESCO World Heritage Site.