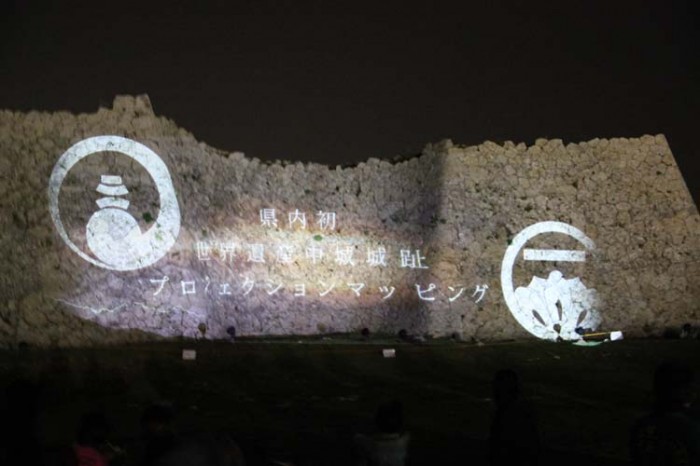 Nakagusuku Castle Ruins Park is the site of a new show this weekend that depicts the historical tale of Lord Gosamaru using spatial augment reality technique.

Projection mapping, also known as video mapping and spatial augment reality, is a projection technology used to turn objects into a display surface for video projection, and Nakagusuku Village has taken a step into the future by integrating the practice to show off the legendary history of Nakagusuku Castle’s King Gosamaru.

Nakagusuku Village is presenting the technology to Okinawa this weekend, with two programs on Saturday, and another two on Sunday, at Nakagusuku Castle. Admission is free for the programs at 5 p.m. and 7 p.m. each day.

By using specialized software, a two or three dimensional object is spatially mapped on the virtual program which mimics the real environment it is projected on. Artists and advertisers alike use this technique to add extra dimension, optical illusions and notions of movement onto previously static objects.

Nakagusuku Village has taken this technology and tweaked it to reflect what King Gosamaru meant to the area’s history.  The public is invited to visit and enjoy this new type of entertainment. There will also be opening concerts on both days. The events will be held outside, so visitors are asked to please come warmly clothed.