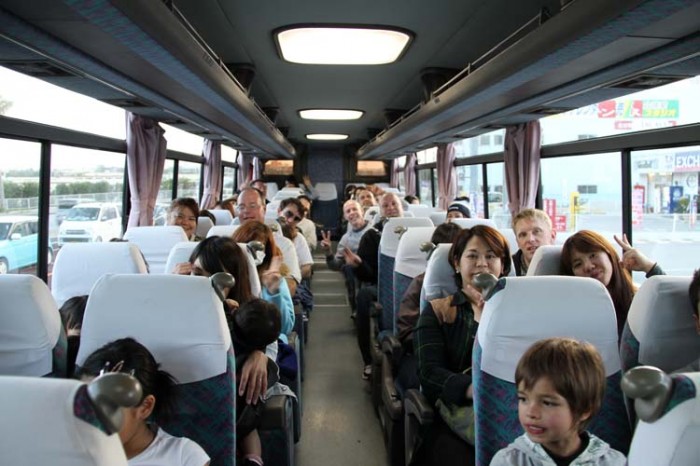 Participants on Japan Update~Golden Kings Bus Tour on the way to enjoy the game and friendships.

It centered on basketball, but the Japan Update ~ Golden Kings Bus Tour with Tomodachi Works proved to be a great opportunity for exchanging thoughts and ideas.

Japan Update collaborated with Tomodachi Works on a first-ever bus tour last weekend, attracting dozens of participants who validated the thought such an idea would lead to international exchange friendships. 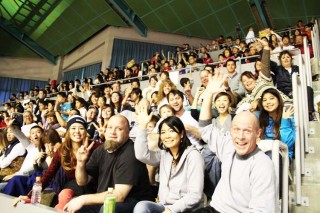 Everyone had a good time.

Yoshiko Takahashi, one of the organizers of Tomodachi Works says it was an amazing opportunity that participants get to know each other, particularly people of different nationalities. Another organizer, Ayumi Jourden, added “we can create this kind of international community events more and more, and make good friendships in Okinawa.”  Participant, Curt Conrad, said “it’s  very good event for creaating friendships between Okinawans and foreigners. There are a lot of foreigners on Okinawa and it is a great chance to make friends for both. I’m sure there are other kinds of community groups in Okinawa a lot, so let’s get together and create a good network.”

Japan Update President Jun Ikemura, says “I think Japan Update can be a very good tool for making international friendship exchange. Japan Update is liked not only by the U.S. military related people but by also other foreigners on Okinawa, and also all of the world because most of people who lived in Okinawa once, go back home and still remember and like Okinawa.” Ikemura adds that “I believe most people want to create good international  relationships.”

The newspaper publisher notes “There are a lot of foreigners on Okinawa, and a lot of nationalities on Okinawa, but too few chances to meet and have exchange opportunities as of now.  We are going to support creating new kinds of opportunities.”  Ikemura has already scheduled another bus tour, and invites the community to join in. Beyond the bus tours, he wants people to “please give us an idea of what you want to do enhance international relationships, what kind of tours or events, things like that. Let’s all together make this a more international island.”

The next Golden Kings Bus tour is in the works, and will be announced shortly.  A Tomodachi Works international friendship exchange event is scheduled every 4th weekend. The next is February 22nd ~ 24th at Mihama American Village.