Itoman counts on lunar calendar and ocean for prosperity 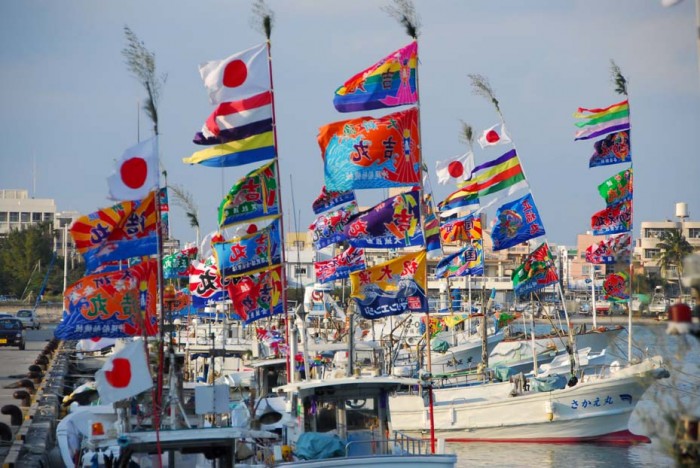 January is about to end, and although most might think there may only be cherry blossoms during this chilly Okinawa season, there is another festivity which may not be known by many. Many of Okinawa’s celebrations and events are scheduled according to the lunar calendar, and one of those is the Lunar New Year (Kyu-shougatsu) celebrated in Itoman City.

Itoman is the southernmost city on the main island of Okinawa. It has a long history as a major fishing port. In the pre-modern era, fishermen from Itoman ventured as far as the Indian Ocean, and records indicate that they made contact with Australia and New Guinea. By 1908 Itoman had 8,000 residents involved in the fishing industry. Men worked on boats and women worked transporting and selling of fish in Naha. The fisherman occupation still continues for many even now.

Being that most men would go out to sea, the lunar calendar has played a very important role in their lives. By using a calculation method which has been passed on from generation to generation using the lunar calendar and observing the moon’s shape, fishermen would be able to tell the range of the tide, has kept them from disasters out on the sea and even leading them to rich hauls.

This year the Lunar New Year begins January 31st and continues for three days until February 2nd.  As a tradition on New Year’s Eve, all fishermen decorate their boats with colorful flags, making the port lively and colorful for three days.

On the same day, the Itoman City Market flourishes and is in full speed with citizens doing last minute shopping.

On New Year’s Day, people visit Hakugin Temple to pray for good health, prosperity and happiness for their loved ones, and then afterwards continue the celebration at home with family members. In Okinawa, the Lunar New Year is celebrated in towns and villages close to ports but not in as large a scale as Itoman City.

You can visit Itoman and actually see the colorful fishing port, as many do at this time of the year. And while there, enjoy some of the great places the city is known for, and grab a bite to eat.

Being a port city, Itoman is the birthplace of kamaboko (boiled fish paste) on Okinawa. In old times since there were no refrigerators, people had to come up with a way to cook the fish to prevent it from spoiling, which lead to the birth of this traditional delicacy. Another very tasty Itoman-born delicacy is the bakudan kamaboko, which is a rice ball covered with kamaboko. It was born when the wife of a fisherman looked for a way to give her husband good nutrition, and eventually came up with this idea. It’s delicious and highly recommended.

Located in Mabuni, Itoman Tourist Farm is a place to enjoy a nice day near the Okinawa’s southernmost coastline playing park golf, and having a bite to eat in the restaurant. There’s also a winery where you can taste the fruity taste of locally produced wine.

Founded around the site of the last fighting during the Battle of Okinawa, and with the mission to promote everlasting peace by passing down the historical lessons learned from the war, the park features the Peace Memorial Museum that contains a two-part exhibit presenting the past and future visions. The museum focuses on rich local testimonies, mementos and visuals from the war. It’s located in Aza Mabuni, Itoman City, and is open daily from 9 a.m. to 5 p.m. with the last admission at 4:30 p.m.

Odohama Coast is a natural beach that is a popular diving and snorkeling spot, also known as a beach for many sea turtles to come to lay their eggs. Also called John Man Beach, as it’s the landing site of John Manjiro upon his home coming from his journey to America during the time when Japan was isolated from the rest of the world in the 1850s.

Cape Kyan is the diverging point for the Pacific Ocean and the East China Sea, with a stunning vista overlooking Cape Arasaki, the southernmost tip of Okinawa’s main island. There is a rock that looks like it wears an Okinawan style hat (Kasakanja Rock). It’s origin remains a mystery. On the cliff facing the ocean there’s a peace monument built to commemorate those who died during the Battle of Okinawa.

Bibi Beach Itoman is a man-made white sandy beach resort. The swimming season lasts from April through October, and it has coin lockers and showers for visitors’ convenience, as well as beach volleyball and BBQ equipment for rent. There are a variety of marine sports to enjoy, the most popular being banana boat and banana biscuit rides. Wakeboarding and snorkeling can be enjoyed throughout the year.

This observatory on a hill offers a great view over Itoman City. In the old days, it was used as a landmark for fishing boats to determine their location. Today, it’s considered a sacred place where the team appointed to bear the flag during annual Itoman Haarii (dragon boat races), performs the commencement ritual to mark the start of the races.

Fishermen from Okinawa and elsewhere use the Itoman Fishing Port. The most common catches include tuna, squid and swordfish. The Lunar New Year celebrations in the Itoman Fishing Port are well known throughout Okinawa. During the Lunar New Year festivities, boats in the port are flying colorful banners as fishermen’s prayers for good catches for the whole year are offered up.

Nishizaki Shinsui Park has a man-made waterfall and small stream where children can enjoy playing in the water. If you’re lucky, you could see some fish and turtles in the big pond. There is also a variety of play equipment where kids of all ages can enjoy and a large-sized slide overlooking the pond.