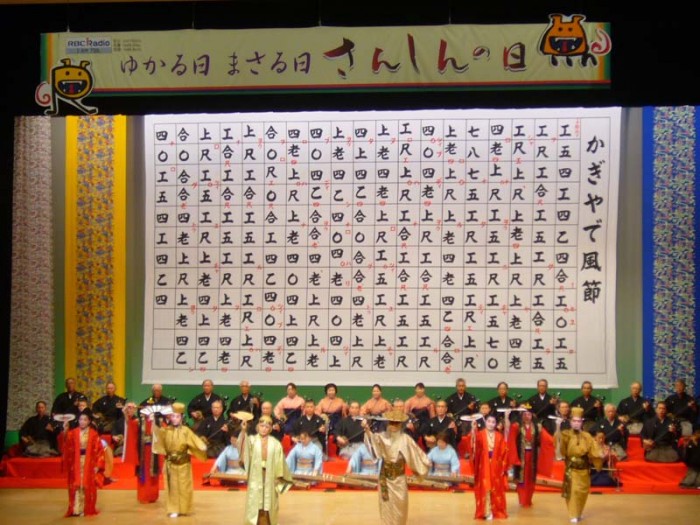 The highlight of the Sanshin Day on Tuesday is the mass performance of sanshin players at the Ootori Hall of the Yomitan Culture Center.

The unique and distinct sounds of the Okinawa sanshin, often called Okinawa’s guitar, are heard across Okinawa daily, but Tuesday will be honored as its special day.

The sanshin is special in the Ryukyu Kingdom’s rich cultural history, and Tuesday is even more special, because it’s March 4th, Sanshin Day. Sanshin no hi meaning “sanshin day”, derived from san… Japanese for three, and shin… Japanese for four. March fourth!
The day will feature a variety of activities and performances across the island, hosted by television networks, clubs and music groups. The Ryukyu Broadcasting Company first began its annual recognition of the sanshin’s vitality back in 1993 with concerts. The idea came from artist and radio personality Naohiko Uehara who appeared regularly on RBC programs. RBC officials say that at least 100,000 people throughout the prefecture will play sanshin on Tuesday.

Tuesday marks the 22nd “Yukari Hi, Masaru Hi, Sanshin-no Hi,” a special performance slated from 11:45 a.m. ~ 9 p.m. at the Ootori Hall at the Yomitan Village Cultural Center. Entrance is free but numbered tickets are needed. Most tickets have already been handed out, but there are still a few at the RBC office in Kumoji, Naha City, 2-3-1 Kumoji, and Tsuha Shamisen in Uruma City. Offices are open 11 a.m. ~ 7 p.m. except Sunday at 184-1 Tairagawa in Uruma City.
The sanshin connects to all music forms ranging from pop to minyo, with the traditional storytelling often in Okinawa’s native language. The sanshin is gaining international recognition today thanks to musical groups such as Begin, an Okinawa trio from Ishigaki. The group’s lead singer is virtually never without his sanshin, which adds a special flavor to their contemporary pop music.

In an age of countless musical genres that employ the most modern digital technologies, Okinawa stands alone is keeping its ancient customs and culture alive with the sanshin and its unique sound. The sanshin instrument is plucked banjo-like. It has a long, black-lacquered ebony neck which pierces the top and bottom of an open frame body covered on both sides with snakeskin. The three strings were formerly made of silk, although tetron is now more commonly used. The strings are plucked by means of a plectrum made of water-buffalo horn.

There are various types of sanshin classified accordaing to such features of the neck as the angle of inclination of the head section, the size of the peg box, and the curvature of the base of the neck before it enters the body. Named after their original makers, these include Makabi, Febaru, Chinen-deku, Kuba Shunden, Kuba-nu-funi, Hiranaka-Chinen, and Yunagushiku types.
Although sanshin was originally reserved for the Ryukyuan nobility, the sanshin became the favorite of the commoners during the nineteenth century, and is currently experiencing a sort of renaissance.

It is said that when a fire broke out in a house, the first thing Okinawans rescued was the sanshin whereas in mainland Japan it was the sword. Nevertheless, such is the popularity of the sanshin nowadays that its soulful sounds are incorporated in many contemporary popular tunes. In the years following World War II, many Okinawans made sanshin using empty tin cans as the voice box, known as “kankara sanshin”.