The only remaining crown of the Ryukyu kings, “Tamakanmuri.”

One of Okinawa’s national treasures, the Royal Crown worn by 14 kings of the Ryukyu era, goes on display tomorrow at Naha City Museum on the 4th floor of Palette Kumoji.

The Royal Crown exhibit will be on display through May 7th from 10 a.m. ~ 7 p.m., except on Thursday the 3rd.  Admission is ¥300 for adults, ¥200 for university and high school students, and ¥100 for junior high school age students and younger. 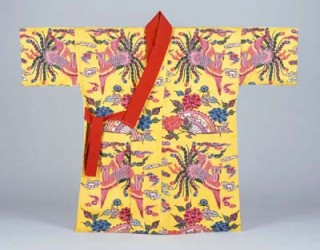 Only members of the royal family were allowed to wear yellow.

Normally the King’s crown is displayed to the public twice a year, but this year it will be just this one time. The crown was granted from China in 1427. Before the battle of Okinawa, it was seen from the pictures that there were one or two more crowns in the castle, but they got lost during the war and now there is only the one left. Along with the crown will also be displayed clothing the King wore for only special occasions. The crown is now a national treasure.

The Special Exhibition of the National Treasure ” Tamakanmuri” centers on the royal ball-like crown, sometimes referred to as a flap crown, and also known in the dialect of Okinawa as “Tamakanmuri”.  It was bestowed to the king for the first time from the Ming emperor of China in 1427, and it was presented along with the flap clothes to King Sakufu. Thirteen subsequent kings wore the crown and the clothes. Along with the flap clothes, only the king at the time of the special ceremony in the country wore the Tamakanmuri. 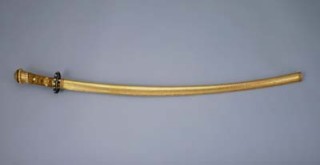 A golden sword was part of the king’s ceremonial regalia worn on special occasions.

The Tamakanmuri is now stored in a museum. Its surface is covered with black crepe, and its braids are sewn with 12 gold threads. It is decorated with a total of 288 jewelry pieces that have been tacked by 24 in each Kinsuji. Seven types of gems and special pieces such as gold, silver, crystal, jasper and coral have been used in making the ball . One part of the headpiece is a gold hairpin, flaming jewel and Ssangyong hammered out precisely.

It is known that prior to World War II one or two more ball crowns were stored in Shuri Castle in addition to this Tamakanmuri . This has been confirmed by testimony and pre-war photos. However, this is the only one that survived the Battle of Okinawa. The whereabouts of the others aren’t known, and are believed to have disappeared during the Battle of Okinawa

Together with Tamakanmuri, there will be on display all three swords that were part of the king’s ceremonial regalia. In addition, there are costumes with yellow background that only people of the royal family were allowed to wear.

Visitors are encouraged to have a look at many of the materials of Naoie swords with various legends and yellow background costumes of royal color, which represent the world and only one ball crown, the glory of the Ryukyu Kingdom.