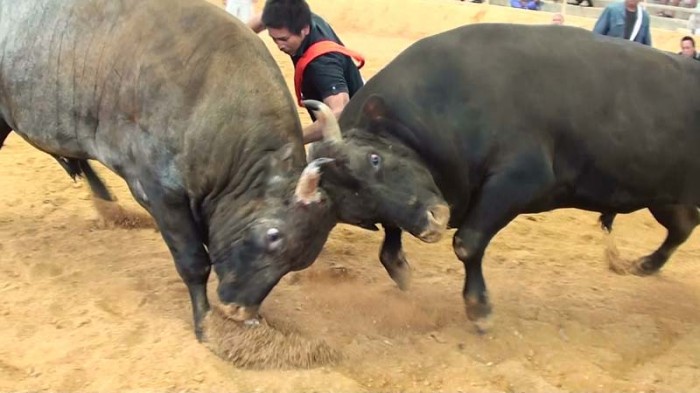 It’s a bull against bull in Okinawan style bullfights on Fathers’ Day in Ishikawa Dome.

Taking in a bullfight on Okinawa is a world away from those seen on television or in Spain or Portugal, but they’re equally exciting to watch.

Okinawa bullfights have two bulls going against one another, as opposed to a bull trying his horns against a matador with a sword.  Equally important for many spectators, bullfights in Okinawa do not end in bloodshed; both bulls walk away at the end of the entertainment cycle.

Okinawa’s most prevalent bullfights are at the Ishikawa Multipurpose Dome in Uruma City, where the action takes place Sunday starting at 1 p.m. http://goo.gl/maps/ueZJA.  Admission is ¥3,000 per person.

An afternoon at the bullfights typically means ten fights, some of which zip by in nearly the blink of an eye, while others can last 2 ~ 4 hours with a pair of determined –or stubborn—bulls.  Each bull has handlers, for which one can be in the ring at any given time.  Typically, they’ll rotate during the match, cajoling their bull to more adventurous action, as often bulls butt heads, and simply do not move.

How to tell which one won or lost is easy; the bull that runs away is declared the loser. Until this happens, however, there are many performances and techniques demonstrated to the spectators. If lucky, both opponents will show their techniques and give the audience a memory they will never forget. Don’t forget your camera!