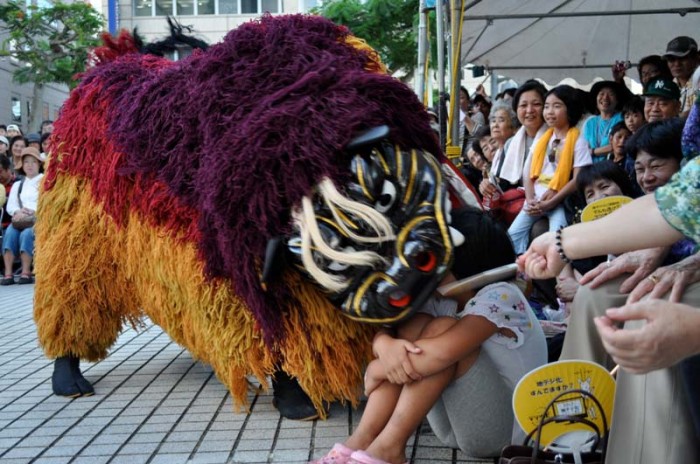 Spectators of the 10,000 Eisa Parade on Kokusai Street can experience the performers close and personal, sometimes very close, but always in good festive spirits.

Sounds of Eisa head to a crescendo this weekend, when thousands of dancers of all ages will fill Kokusai Street to perform in front of tens of thousands of spectators in a four-hour parade, Sunday.

During the parade, the dancers from some 60 groups wind their way down a 1.6-kilometer stretch of Kokusai Street in downtown Naha. Separate Eisa groups and Naha District youth troupes will perform as they parade the length of Kokusai Street. The parade slows as groups stop along the way to demonstrate their skills along the entire mile-plus stretch, ending at Palette Kumoji. 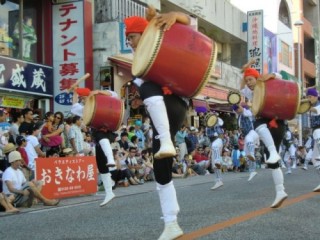 Eisa groups from throughout the prefecture strut their stuff on Kokusai Street in Naha on Sunday.

Foreigners, military personnel and their families, tourists and locals will mix and mingle freely throughout the afternoon, the spirits flow, and cameras get a real workout. Long before the parade activities, the streets will begin filling with spectators starting shortly after noon. Naha’s mayor will address the gathered crowd of dancers and spectators, and then the music begins. 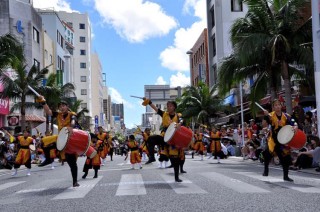 As the parade proceeds through the hottest hours of the day, organizers have arranged water sprays along the route to cool down both performers and spectators.

While amateurs, the Eisa groups certainly present a professional appearance and sound, the colorful uniforms and intense dance movements striking a chord echoing Okinawa’s historical past and present. Groups descend on Naha City from throughout the Prefecture, bringing youth groups, children’s groups, foreigner groups and adult Eisa teams to join the parade.
Authorities will have traffic blocked off into the downtown Kokusai area, and streets will remain blocked until 7 p.m., although congestion could last an hour beyond that.

Travel south on Highway 58 to Naha. The first opportunity to turn left toward Kokusai will come shortly after passing the Tomari Port / Tomarin Hotel. At the next intersection, turn left at the Richmond Hotel traffic signal. Kokusai is about one-half kilometer away. Three other left turns can be made at Matsuyama Crossing, Kumoji Intersection and Izumizaki Intersection. All are marked. Traffic will be heavy, and parking farther away from the Kokusai Street area itself is recommended. Be sure to have Japanese yen with you; parking lots and most vendors do not accept U.S. dollars.