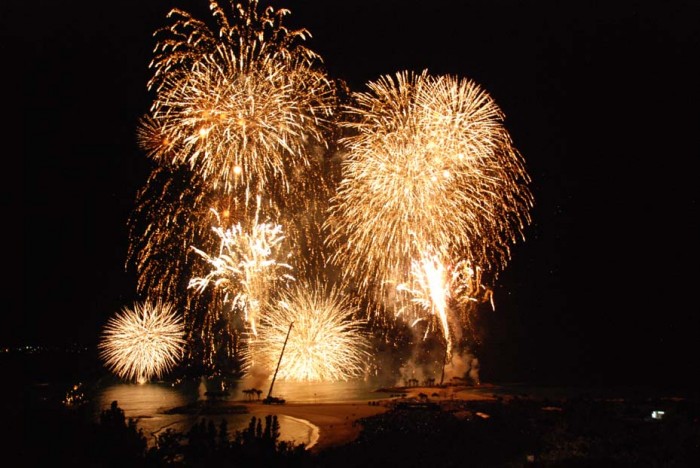 Okinawa’s largest fireworks show lights the skies above the Ocean Expo Park in Motobu this Saturday.

More than 10,000 fireworks will be launched near Emerald Beach at Motobu’s Ocean Expo Park Saturday in a brilliant display of pyrotechnics billed as Okinawa’s best fireworks festival.

The 36th annual Ocean Expo Park Summer Festival is an afternoon and evening event, with live entertainment kicking off at 4 p.m., and fireworks exploding in vivid colors at 8 p.m.  The activities officially begin at noon, with admission free to everyone.  The beach excitement runs throughout the afternoon at the Asobinohama (Play Beach) with its dolphin slider, water gun battle, water balloon darts, and more. The beach tug-of-war gets under way shortly after 4 p.m. 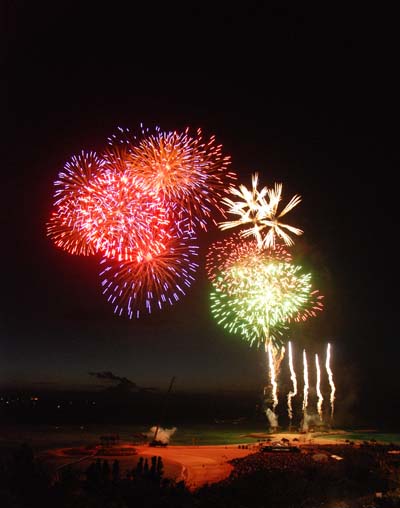 Action in the skies is nearly non-stop starting at 8 p.m.

Three bands take to the stage at 6 p.m.  7!!, Manami and Civilian Skunk will get the crowd pumped up for the fireworks, which begin at 8 p.m., a bit after sunset.

Last year’s festival drew more than 42,000 people to enjoy the day. The festival includes about 10,000 fireworks, which makes it the largest fireworks show on Okinawa. The large fire flowers spew beautifully powerful blooms across the night sky for an hour, except a brief pause halfway to reload the fireworks tubes.

“Golden Hour” currently broadcast on FM Okinawa will be on hand to broadcast live from 6 p.m. ~ 8 p.m., and will act as the host of the Sunset Concert.

All vehicles will be restricted on Town Road 16 from Yamachan-bento to the three-way intersection joined by Route 114, except for Toyokawa residents and visitors to local commercial facilities, from 7 p.m. to Midnight. Route 505 will have no restrictions, and traffic will flow in both directions.