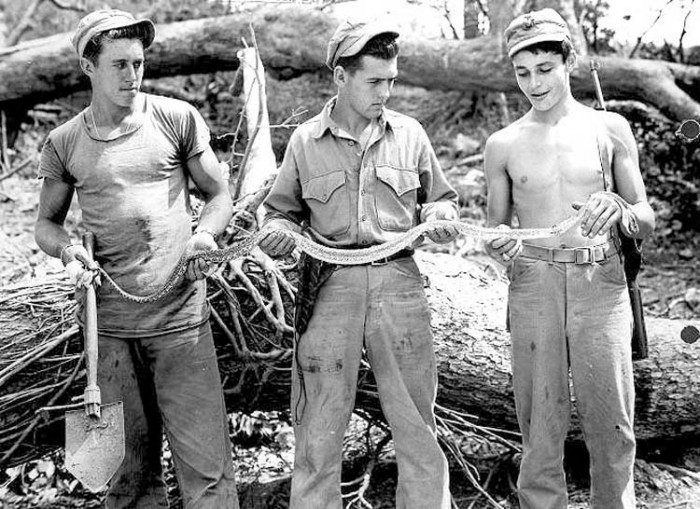 During and after the Battle of Okinawa many American GIs got a chance to encounter habu up close and personal.

The Japanese word ‘Habu’ refers to a particular type of snake that inhabits the Ryukyu Islands. These snakes are also known as tree vipers or pit vipers. There are three species of Habus found on Okinawa. Two of these species have been introduced and one is native to the island. They are all venomous snakes that feed mainly on rodents and other small mammals. 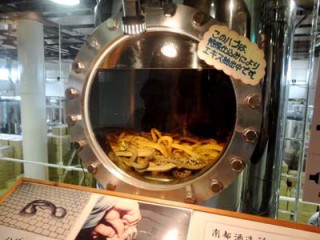 Habu snakes are large, venomous and can be aggressive when provoked, but on the island of Okinawa these dangerous creatures are not always regarded as being something to avoid. It is the custom in Okinawa to catch these snakes and use their bodies to make a potent drink known as Habu sake.

Native Okinawa Habu snakes are of a pale greenish yellow color and are marked with a wavy pattern of dark green patches with yellow edges. The underside is much plainer and almost white.

A Habu snake can grow up to eight feet long, although most of them don’t reach that size. The introduced species are only three or four feet in length and are more gray-brown in appearance than the native Okinawa Habu.

On Okinawa Island it is important to know what to do in case you get bitten by one of these aggressive snakes. Habu venom is not always lethal but it is hemotoxic, which means it can do a lot of harm to blood cells while poisoning the blood.

Victims of a Habu snakebite may die or can suffer permanent disability if they do not get immediate medical attention. The thing you should never do is to apply a tight binding around the bite. This will only allow the venom to have a worse affect in that area. 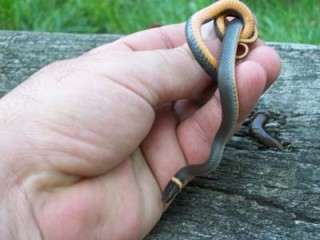 Even a baby habu is a habu and not something to play with.

The correct action to take when a Habu snake bites someone is to clean up the area around the bite in order to prevent infection within the bloodstream. The affected part of the body will need to be kept immobile until a medical professional can treat the victim.

Statistics show that the population of Okinawa is known to have some of the longest-living inhabitants in the world. The presence of Habu snakes is obviously not a huge threat to all Okinawans, and the availability of effective medical treatment means that a bite does not have to be debilitating or result in death.

Habu snakes are more active in the summer months and can often be seen basking on rocky ledges. They can also be found in caves. Most of the snakes inhabit forested areas, but they will move out into farmland and cross fields that are close to fresh water. Habu snakes also appear in and around human settlements, where they are known to hide in old tombs and inside traditional walls made of limestone rocks.

Some Okinawans who know where Habu snakes are found collect large numbers of them and use their bodies to make Habu sake. This strong liquor is often drunk from bottles containing the remains of a Habu snake itself. It is also believed to have medicinal qualities.

The toxicity of Habu snake venom is neutralized by alcohol during the process of preparing habu sake. A jar or a bottle of Habu sake may contain a complete snake that has been submerged in alcohol and may have a strong smell, but the drink has a less obnoxious smell when the snake’s guts are removed before it is submerged.

If it is true that Habu sake has a positive affect on health, then it is also possible that its consumption has contributed to the longevity of the Okinawan population. The potent drink is also supposed to increase virility, having a similar effect to taking Viagra, a belief probably having its roots in the fact that habus take for hours when they mate.

Okinawan Habu snakes are valued as much as they are feared. They should be avoided in the wild and need to be deterred from human habitation, but with immediate medical treatment, a bite from a Habu snake will not kill or do any permanent damage.