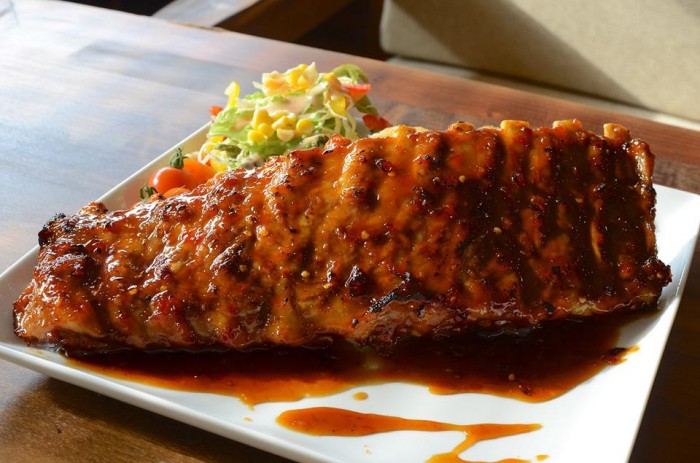 Ichariba’s Back Rib is a meal many of its customers swear by.

Take a two-star Michelin chef with one of Tokyo’s most famous Teppan Yaki restaurants, bring in the freshest Okinawa-grown vegetables, combine, and you’ve the secret to Ichariba Co-Lab Okinawa.

Chef Kengo Igarashi has plenty of experience, a necessity to generate a two-star rating from the French Michelin Guide.  He also has his own individuality, creating special dishes that have customers nearly drooling as they anticipate his “Back Rib”, a meat not readily available on Okinawa.  His big rib set is only ¥1,860, while a version for smaller appetites runs ¥1,380.  Both include salad, as well as rice or bread. 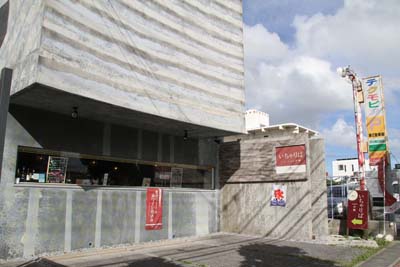 The restaurant is located on the first floor of a rather unusual looking building.

Igarashi hints that a key is Ichariba Co-Lab’s cooking oil. Coock in the U.S. cannot use trans fatty acids, but there are no restrictions here in Japan yet, meaning many of his competitors still use them.  He says Ichariba Co-Lab never uses oil that includes trans fatty acid, and “uses 100% organic Whole Harvest for our fries or grilled dishes. Our oil is good and ingredients are all good too”.

The motto of Ichariba is to not only serve delicious, wholesome dishes, meals that are healthy. “Food makes humans, and good ingredients make everyone feel all right,” says the chef, “So we stick to all quality ingredients for our menus. We know humans of this era are thinking seriously about food for their own health, and we want you to try our menus. We’re not expensive and we are good for your health.”

Hayakawa asked Igarashi to be the chief executive for his new restaurant business, and he accepted.  Igarashi says “we are very stuck on our fresh ingredients and serve not only tasty meals, but those also good for health.” He adds that “my best pleasure is becoming a friend to customers, because Okinawa is my new place, and I love it here and have a good time with various people here, not only Uchinanchu, but also mainland Japanese or people of many nationalities here.

He points out that a good menu makes people laugh, and people laughing makes people friendly, and it makes for new friends. “I hope everybody gets friendly with each other,” he says while extending an invitation for people to check out his cuisine. “Please feel free to stop and try our healthy food and become a friend!”  He says Ichariba is also planning cruising tours to nearby Kerama Island, and welcomes foreigners

The restaurant, which accepts only yen or credit cards, but no dollara, opens at 11 a.m. daily for lunch until 5 p.m. and then until midnight for dinner, with the last order at 11 p.m. Ichariba Co-Lab Okinawa is located at 3-3-3 Mihama. Chatan, the google map http://goo.gl/maps/pmlXE