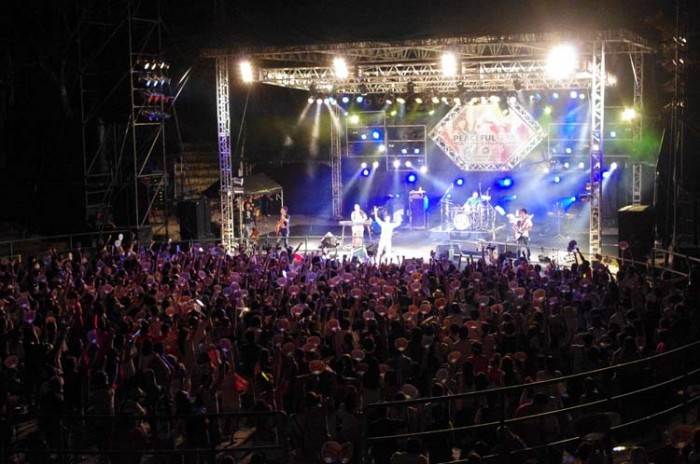 Okinawa’s top rock performers and visiting artists belt it out at the 32nd Peaceful Love Rock Festival on July 12 & 13.

One of the most powerful and popular rock concerts on Okinawa is ready to rock ‘n roll July 12th and 13th at Okinawa City Athletic Park, drawing more than a dozen name artists to the stage.

Advance one-day tickets for the two-day event are ¥3,500, while two-day tickets are ¥6,000.  Tickets at Okinawa City Athletic Park on days of the event are an additional ¥500,  Japan Update has a special deal of its own for the Peaceful Love Rock Festival on the 13th; it is offering a limited number of day tickets for only ¥3,000.  Contact Japan Update for details.  General tickets are now on sale at Lawson convenience stores, Lcode 8551, FamilyMart e+, Ticket Pia Pcode 228-930, and Music Town Otoichiba. 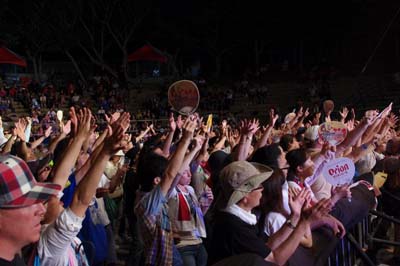 Thousands gather to enjoy the two-day festival now on its 32nd year.

More than 20 bands are slated to perform this year, including rock groups from South Korea and Taiwan.  On tap Saturday the 12th will be Asian Regga and The Haru-Natsu-Aki-Fuyu (Spring, Summer, Fall, Winter), bands chosen by audition, Trickster Goonies, Civilian Skunk, D-51, OVDS from Taiwan, Jang Giha & Faces from South Korea, Kariyushi 58, HY and Def Tech.

Veteran rock musician Kachan, who’s a mainstay at the annual festival, notes “I have played at the Peaceful Love Rock Festival every year for 30 years! Many players who were not even born when I entered this event first time, have grown up taller than me, and play on the same stage! The more I sing at this event, the more I enjoy it!” Other artists said “We will make this the best rock festival for Okinawan people.”

The festival takes place at the Okinawa City special field stage in the Yamauchi district of the city near Kadena Air Base Gate 5. Gates to the event will open both days at 1 p.m. The music will start 1:30 p.m.