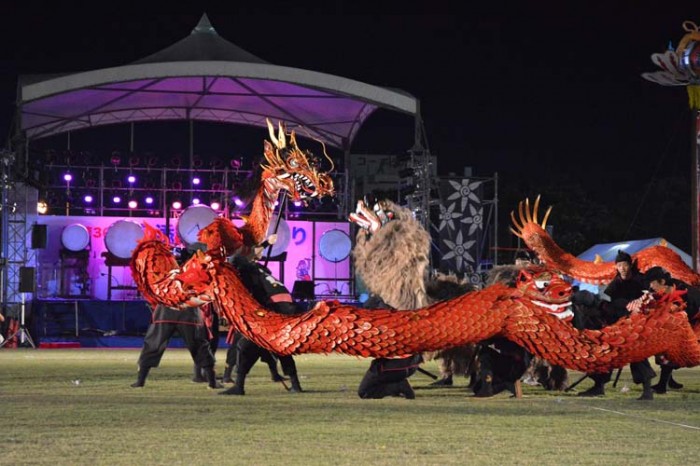 Dragons and lions have always been a feature at Urasoe Tedako Festival bringing alive the myths and mystery of the distant past.

Urasoe City’s now putting the finishing organizational touches on its Tedako Matsuri, which kicks off on Friday.

This 37th annual festival runs through Sunday the 20th, providing pageantry, entertainment and music at the Urasoe Sports Park. (Map: https://goo.gl/maps/zH4Vi)  All in all, it’s the biggest event of the year for Urasoe City, which is inviting the international community as well as Okinawans to participate.  Festivities begin at 2 p.m. Friday, running until 9 p.m.  Saturday and Sunday hours are 9 a.m. ~ 9 p.m. 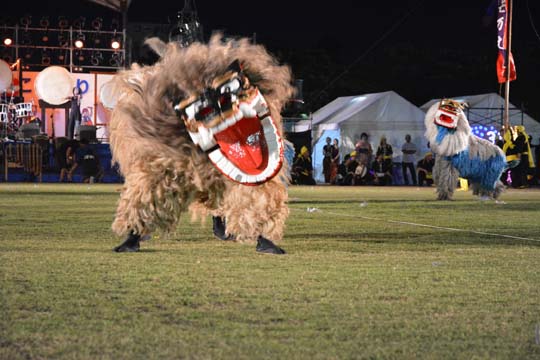 The lion dancers present their best at Tedako Festival shishimai.

While not the largest of the summer festivals on Okinawa, it’s one that brings the local culture into focus.  The city’s Yafuso Street will be closed to traffic Friday the 18th from 5 p.m. to 10 p.m. for the parade, which includes youth groups demonstrating their skills in carrying and controlling ‘hatagashira’, the tall, often unwieldy banners on bamboo poles.  As with all community festivals, it is free.

A plus for many military families is the convenience of having a major festival practically in the back yard. Urasoe is centrally located near Camp Kinser, just south of Kadena Air Base and Camps Lester, Foster, and Futenma.

The three-day Tedako Festival, with Tedako meaning ‘children of the sun’, pays homage to a powerful king of the ancient Ryukyu before it was united into one kingdom. King Eiso had his court in Urasoe, with the royal castle now in the Urasoe Castle Ruins Park. The festival begins one week from tomorrow with taking the fire from the sun at the castle ruins. 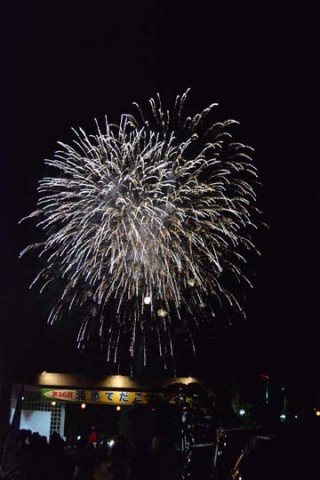 Both Saturday and Sunday end with fireworks.

Festival action on Saturday takes place at Urasoe Sports Park starting with the Senior Citizen’s Club Karaoke Contest at Tedako Large Hall at 9 a.m., followed with the Urasoe Mayor’s cup Children’s Sumo Competition and many other sports events aimed at citizens’ participation. The Flame Lighting Ceremony at Iso Castle Ruins Park gets under way at 2 p.m.  Opening ceremonies on the main stage are at 6:30 p.m.

The Picture Scrolls of the Three Great Urasoe Kings starts at 7:10 p.m. on the Main Stage at the Festival Grounds, followed by the Great Fireworks Show at the Main Stage beginning at 8:40 p.m. that ends the day.

There is no parking available at the venue, so it is recommended visitors use public transportation.