Izena is birthplace of King Sho En of Ryukyu Kingdom 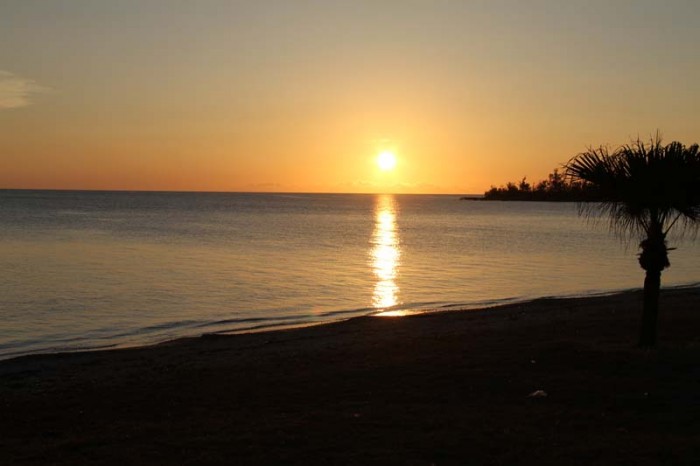 No study of Okinawa history is complete – especially the history of the Ryukyu Kingdom era — without an appreciation of the role of Izena Island and its most powerful leader. 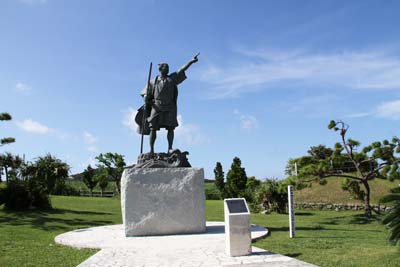 King Sho En Park has a statue of young Kanamaru, who later became King Sho En. His umbilical cord is buried in a corner of the park called Mihosojo.

The founder of the second Sho dynasty of the Ryukyu Kingdom, King Sho En was born on Izena, and it can be said he is the man who was most successful in the history of the Ryukyu Kingdom. Sho En is the name he gave himself after he became king; before, his name was Kanamaru and also Machigani in his youth. According to records, Machigani was born on Izena Island. When he was young, he was so handsome and smart he was a big hit with the island girls. Naturally, other guys didn’t like that.

His legend began one drought season, as people worried about the dry spell, but only Machigani’s rice field was filled with water. People were suspicious that Machigani stole the water from other rice fields and cut his field irrigation, but a day later, again his field was full of water. People wondered why, but thought it gave them a reason to kick him off the island. Machigani got critical feelings and left. 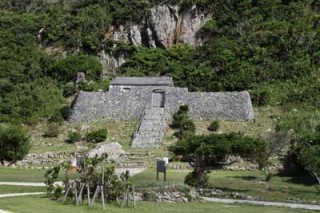 Izena Tamaudun was built by the second king of Sho dynasty for his relatives on Izena.

His rice field called “Sa-ta”, meaning reverse field, remains to this day still full of water. After he reached mainland Okinawa, he stayed at various places and finally reached the central area of the island and got a job at Shuri Castle. There, he worked for King Sho Taikyu and won favor with him. As he was promoted, his position became higher and finally he got the job managing government for the Naha area. After King Syo Taikyu passed away, Machigani was not pleased with the new king because of his tyrant style and retired. King Syo Toku died after just one year on the throne and the new progeny was too young, leading one of the chief councilors to suggest recruiting Kanamaru (Machigani) to take over as the new King of Ryukyu.

At that time, the economy and government management was very bad, and people agreed to Kanamaru becoming the King. He accepted it and became the king, King Sho En. His reign was the beginning of the 2nd Sho dynasty. Kanamaru was 56 years old at that time, and his dynasty lasted unbroken from 1470 until 1879 when the Meiji government of Japan brought the Ryukyu Kingdom to an end, made Okinawa one of its prefectures, and abolished the Ryukyu Royal court.

Izena Island is a small island but there are a lot of sightseeing places, including the birthplace of Kanamaru. It’s located about 30 km off west from Hedo Point, about one-hour by ferry from Unten port in Nakijin Village in the northern part of Okinawa’s main island. There are normally just two round trips by ferry each day departing 10:30 a.m. and 3:30 p.m. from Unten Port, so if you want to watch some spots and relax, the village’s strong recommendation is to stay at least one night on the island. Departures from Izena are 9 a.m. and 1:30 p.m.

To get to the Unten Port, take expressway to the end at Kyoda, and continue on Highway 58 through Nago until Isagawa intersectiong, then turn left and take route 71 and also route 505, and change to route 72 at Amesoko. Finally, follow the signs to the Unten port.

On this weekend, there is the King Sho En Festival on the island, and the ferry could make some extra runs. Details on the ferry are at http://vill.izena.okinawa.jp/izena/access (in Japanese only). 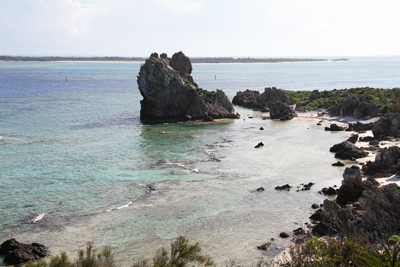 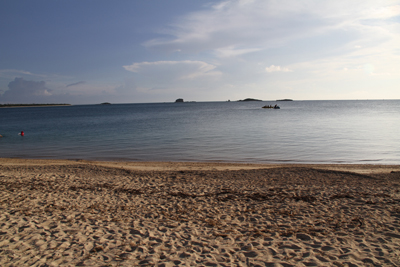 Izena beach is the best-known beach on the island. Extremely clear waters and a long sandy beach are breathtaking, and there’s plenty of green nature  around the beach. Camping and BBQ are fine, and there are showers for public to use. The sunset view is gorgeous, and the outdoor lights are turned off around 9~10 p.m. Map: http://goo.gl/maps/K36uZ 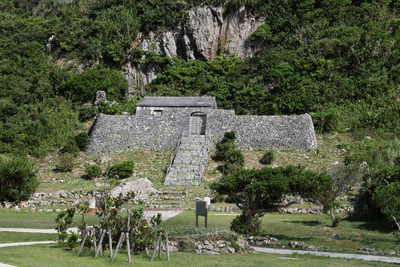 The son of King Sho-En, King Sho-Shin, built the tomb Izena Tamaudun on Izena Island. Sho-Shin is known as the builder of Shuri Tamaudun near Shuri Castle. He also built another Tamaudun for his royal relatives who lived on Izena island, like his grandfather and grandmother. According to local records, the tomb was originally at another place, and moved later to its current location. Still to this day, the Sho-family relatives gather to the tomb on Shimi. Map: http://goo.gl/maps/M0owR 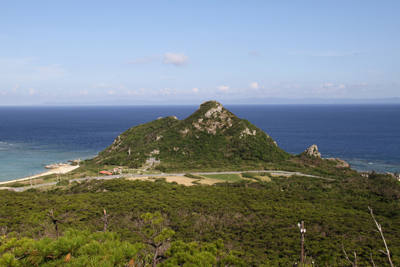 A man named Samekawa Ufunushi. who was the grandfather of King Sho-Hashi, and the patriarch of the royal Sho family, built the Izena castle on an almost 97-meter-high hill, where the view from the top is superb. Map: http://goo.gl/maps/Vfyry 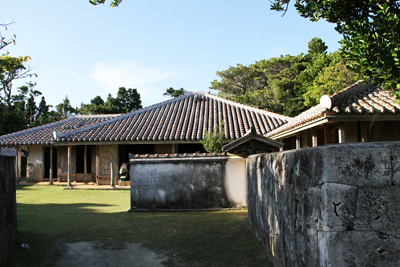 The Mekaru House is the residence of the Mekaru family, who were relatives of King Sho-En. The original owner of this house was an uncle of the king, and it remains in the ownership of the same family to this day. It’s the members of this family who conduct the “shiimi” events at the Izena Tamaudun. The house was reconstructed in 1906, was spared of damage during the WWII, and was designated an Important National Cultural Property in 1977. Map: http://goo.gl/maps/CpKki 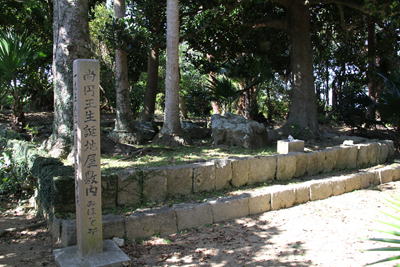 The park was built to celebrate the 580th  anniversary for King Sho-En (Kanamaru)  in 1996. One block of the park is called Mihosojo where Sho-En’s umbilical cord is buried. The statue of Kanamaru, young Sho-En, was designed by well-known Okinawan artist Bokunen Naka, who also hails from Izena island. There are playgrounds and a pond. Map: http://goo.gl/maps/9xsTb 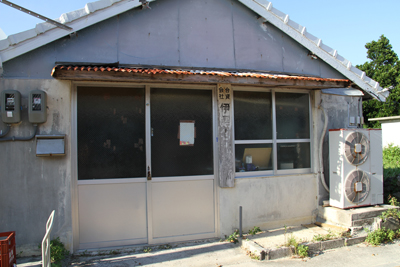 Izena Distillery was founded in 1949 and is already more than 60 years old. It’s the only awamori maker on the island, and loved by local residents. Visitors can tour the distillery on weekdays. A popular awamori brand created at the distillery is called “Tokiwa” that means Ryukyu pine tree. “Izena island” and “Kanamaru” are two other brands produced there. Bokunen Naka, Izena’s native artist son, has designed some of the labels on Izena Distillery awamori bottles. Map: http://goo.gl/maps/SXMCd 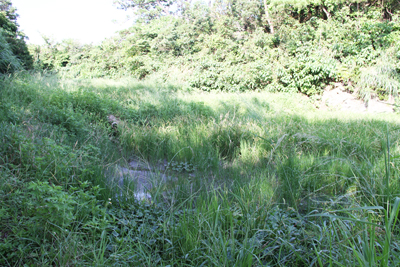 Sa-ta is a rice field once owned by Kanamaru. According to local folk lore, one dry season, most of the rice fields on the island suffered from drought, but his field did not. People suspected Kanamaru stole water from other fields and broke his irrigation system one night. But on the next day, his field was again filled with water even though the others were dry. That’s when the field became called “Sa-ta,” which literally means “reverse field.”  Map: http://goo.gl/maps/PifJN.