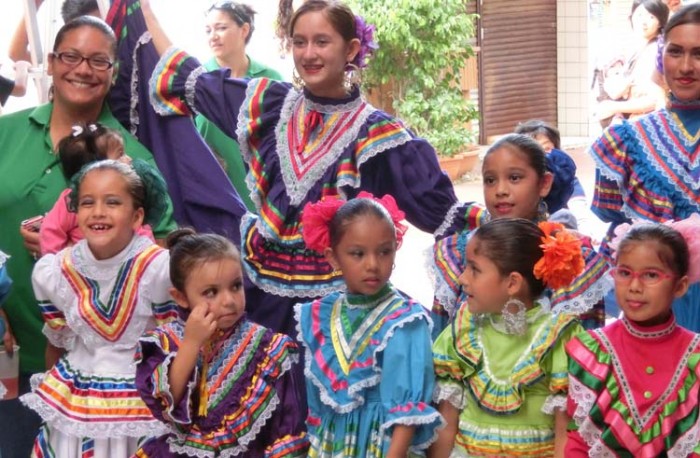 Palmyra Street will change to a Mexican town with plenty of entertainment and spicy ethnic food from 5 to 9 p.m. Saturday,

In Mexico City, celebrations for Mexican Independence Day begin at 11 p.m. on Monday, but in Okinawa City the festivities are taking place Saturday night. 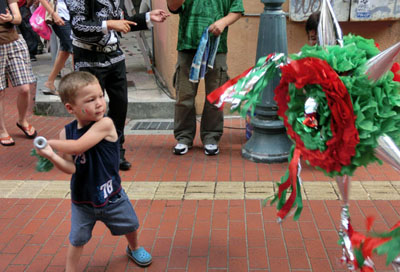 Smashing a pinata is a perennial favorite of all children.

The event site is the ‘Palmyra Street’ arcade in Koza, Okinawa City. Mexican folk dance with colorful ethnic costumes and plenty of Mexican music will be drawing attention. Of course, spicy Mexican food will be there.  The whole Palmyra Street will be transformed to a Mexican town, with green, white and red colors. The highlight is a ‘pinata’ for kids! Koza International Plaza, which is hosting the free festival, is asking Okinawa “Why don’t you come to Palmyra Street this weekend, to enjoy Mexican culture?”

The largest Independence Day celebration begins at 11 p.m. Monday in Mexico City’s Zocalo, which is decorated from the beginning of September with red, white and green lights and Mexican flags. The President of the Republic goes out onto the central balcony of the National Palace and rings the bell and cries to the people gathered in the square below, who enthusiastically respond “Viva!”

The church bell to be rung is the same one that In the early hours of September 16th, 1810, Miguel Hidalgo y Costilla, a priest in the small town of Dolores, Guanajuato, rang to gather the townspeople. He called for the people of Mexico to rise up against the Spanish Crown, thus initiating Mexico’s War of Independence. It took another 11 years to finally gain its independence, but the priest’s actions are the heart of the celebration known as the Grito de Dolores commemorated every year on town squares across Mexico.