Hanta Path is walk through history 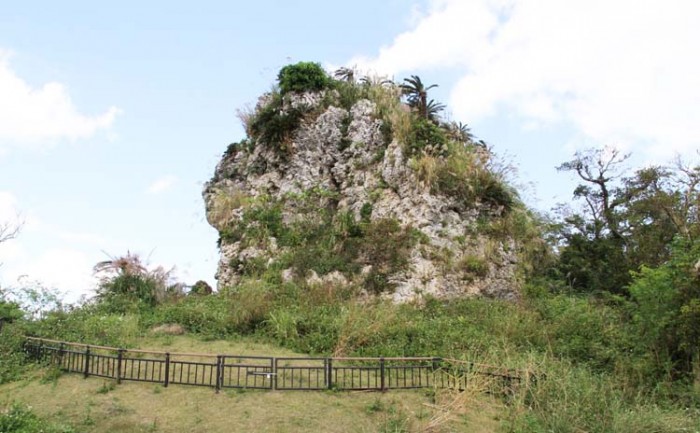 When Commodore Matthew Perry and his entourage took a rest by this rock during his visit in 1853, they hoisted the American flag on top of it, and the site has been known ever since as “Perry’s Banner Rock.”

Hanta Path was once a part of the Ryukyu Kingdom’s main road connecting Katsuren Castle, now part of modern day Uruma City, with Shuri Castle, the seat of the government, through Nakagusuku Castle in Nakagusuku village, and Kochi Castle in Nishihara. 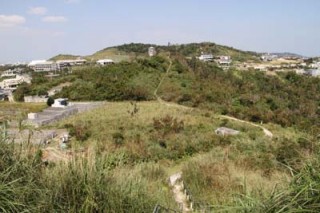 The Path winds through a landscape of sugar fields.

The Hanta Path is easily accessible by car, after which a relaxing walk provides opportunities to contemplate Okinawan history.  According to undocumented history, the road was constructed gradually during the 12th through 15thcenturies, serving as the area’s principal road on the west side of Okinawa Island. Many historical assets still remain along the road, but unfortunately, the path is so long and hard to clean throughout the year, meaning some parts of it are covered with bush at least during some parts of the season. Because of that, there is the possibility of an encounter with a habu snake, especially in summer 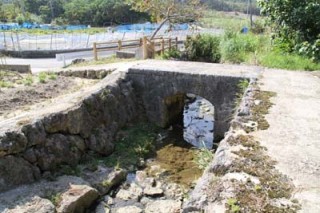 Only one of the stone bridges along the Hanta Path remains, the rest were destroyed in the war.

time. As visitors walk this historical path, they’re encouraged to walk carefully and avoid going into the brush.

The middle Ryukyu main road was from Katsuren to Shuri in ancient times, but it is still open for walks through the Nakagusuku part. It is called Hanta Path, and its starting point is at San-A Nakagusuku Branch, and ending at Nakagusuku Castle ruins. Hanta means cliff in Okinawan dialect, and visitors quickly find why they call the path cliff street when walking the path. Although only one part of the ancient road, the existing Hanta Path is about seven kilometers long, and there are some long and steep stairs along the way, making it not so easy for people with physical limitations. 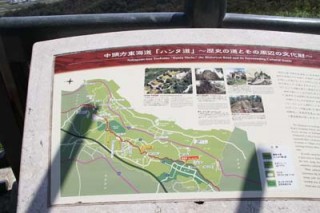 A plate at the start of thr path has a map, some pictures and a bi-lingual explanation of the path’s history, and some significant points along the route.

If visitors park their cars at the starting or end point and walk the path, they must return the same way, unless someone agrees to move your car. The stroll provides a real feel of the Ryukyu era along the path, and it is easy to imagine ancestors who used to walk this path.

There are a couple of ancient assets here, and caretakers hope visitors will enjoy the Hanta path in Nakagusuku village.   First, there is Agai Tida bridge: it is located just behind the San-A Nakagusuku branch and from there it is easy to see the Nakagusuku Village and Nakagusuku Bay.  Along the way is Arakaki stone bridge, a stone bridge in Arakaki district in Nakagusuku.  It is also a part of Hanta path. There were more bridges in that area before war, but others were destroyed and now just one bridge remains.

Tsunmaasu is the ancient rotary circle. A pine tree is planted at the center of the circle.  Another popular photo site is Perry’s Banner Rock: When Commodore Matthew Perry’s party explored the island’s east coast during his historical visit in 1853, they walked through the Hanta Path. Taking a rest under this rock, and the view was amazing, they placed the American flag on the top of the rock and named it the “Banner Rock”.