They are big and slow, but they love to play and have fun. 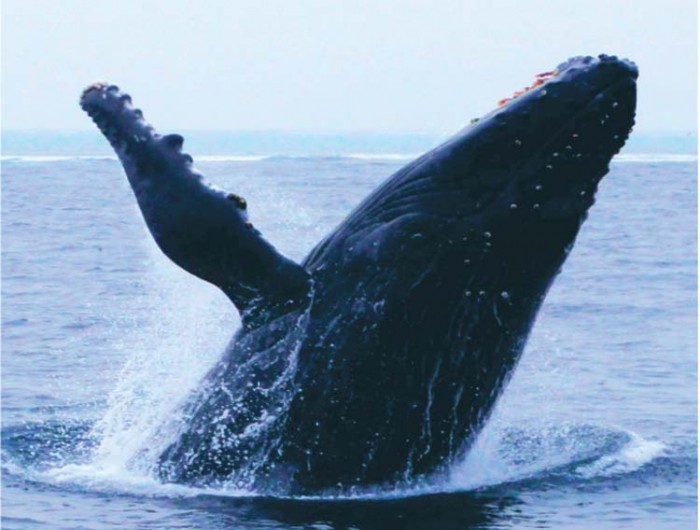 Every year a large number of people visit to watch humpback whales as they arrive to their winter playgounds off Kerama Islands.

Humpback whales are making their annual migration to Okinawa waters, and now it’s easy for people to watch the lumbering mammals off the Kerama Islands, near Naha.  Tours are the easiest way to join Mother Nature as her ocean species show off for you.

Scientists who study the whales, which spend much of their year in the waters around Aleutian Islands area off Alaska’s coast, say the fins and plaits are as unique to whales as fingerprints are to humans.  No two whales are alike.

The Keramas is a favorite area for the humpbacks, which began showing up last month and stay until late spring. The males provide much entertainment for spectators as they form groups, called mating pods, to wage often fierce fights with each other as they vie for the females’ attention.  Breeding runs in February and March, with births coming the following winter.

Whale watching tours depart twice daily from Chatan Fisherina.  The tours will run through early April, with tour promoters virtually guaranteeing visitors will see whales on either the first or second trip.  The tour is ¥4,200 for adults, ¥3,200 for kids 5 ~ 11, and ¥1,300 for those ages four and under.  The price includes a ¥150 fee for Hamagawa Fishing Port use, and another ¥150 yen fee towards ocean cleanup efforts. The tours depart at 9:30 a.m. and 1:30 p.m.  Participants should be at Chatan Fisherina at least 30 minutes before the scheduled tour.  Tours take three hours.  Tours can be booked through Island Life Concierge at   www.islandlifeconcierge.com/beactive/whale-watching.

The Zamami Whale Watching Society is responsible for dozens of tours now through March, the peak whale watching season.  The entire season is being billed the Zamami Village Whale Watching Festival.  Twice daily tours depart Tomari Port in Naha.  A morning whale watching boat, the high speed Queen Zamami, departs at 9 a.m. to Zamami Port.  Following the whale watching, participants have a choice of taking the Ferry Zamami to Naha at 2:30 p.m., arriving at 4:30 p.m., or the Queen Zamami at 4:20 p.m., arriving at 5:10 p.m. The Ferry Zamami leaves Tomari Port in Naha at 10 a.m. daily, linking up with the 12:30 p.m. whale watching tour at Zamami Port.

Reservations and tickets are available through the Society at (098) 896-4141.  A round-trip ticket from Naha aboard the Queen Zamami is ¥5,970, while a round trip ticket on the slower Ferry Zamami is ¥3,540.  Tickets at Zamami for the whale watching boat are Y5,500 for adults and Y2,625 for children.  The whale watching tour is approximately two hours.

Dive Shops and travel agencies in Zamami, Tokashiki and Naha all have tour programs throughout the coming weeks.  Getting to Zamami, one of the larger of 20 islands in the Kerama Island Group, is easy from Naha’s Tomari Port.  The cruises take 1-2 hours, and leave Tomari 2-3 times each day. Call 868-4567 for reservations and information.  Other ferries ply the route from Naha’s Tomari Port to Tokashiki Island.  From there, local cruises venture into the whale watching areas.  Another option is to fly from Naha Domestic Airport to Kerama Airport on Fukaji Island, then pick up a boat for the tour.  Several RAC flights make the run daily, each taking about 15 minutes.

The choice of watching for whales from a moving boat, or from the Whale Conservatory in Unazati on Zamami Island, is yours.  It’s from the Conservatory there that the whales are spotted by Society members, and the location relayed to the ships.  For those with an equilibrium situation, it’s a recommendation.  Another ashore site on Tokashiki Island is the Okinawa National Youth Center atop Mt. Akama.  The Center offers not only the view, but inexpensive accommodations and more.

Onna Village Whale Watching Association offers whale watching tours through early April.  Call 090-8655-7943 for information.  HIS Okinawa has tours from Hamakawa Port in Chatan Town through March 31st.  Call (098) 868-1133 for details.  There are many other tour agencies offering whale watching tours.  Information and prices are available at http://www.ocvb.or.jp/card/en/0600001503.html.

The Kerama Islands are 25 miles west of Naha.  The area was once a popular whaling ground until the whales disappeared from the area.  Today, the Whale Watching Society has a campaign under way to repopulate the area, and restore the region as a principal whale breeding ground.  It appears to be working, as humpback whales make the annual trek to the Keramas to give birth to their young, and then nurture them in the warm, quiet waters.  The whales travel about 3,200 miles to mate and breed here, then move back to the cold northern ocean waters in summer to feed.

After the whale population was decimated, the humpbacks in the region fell under protection of the International Whaling Commission, which in 1966 banned their hunting.  The Russians continued illegal catches until being pressured to stop in the 1970’s, allowing the 25-40 ton mammals to regenerate.  There are now 35,000~45,000 humpbacks, about 1/3 of the previous population.

Humpback whales are part of a family of species including the blue whale, fin, minke, sei and Bryde’s whales.  Black, with a mottled black and white underbelly, the humpbacks grow to lengths up to 52’ (16 meters).  They feed on fish and krill, a shrimp-like crustacean, gumping down 1~1½ tons of food a day. The whales are active and energetic, enjoying splashing and doing flips in the water.  They are unique, with dorsal fins on their backs and ventral plaits running from the tip of the lower jaw back to the belly.  Scientists explain that the color and shape of those fins and plaits, as well as the uniqueness of the tail fin, are as individual as fingerprints from whale to whale.  No two are alike.

Humpback whales sexually mature in the six-10 year age range.  Females calve once every 2-3 years, with gestation taking 12 months.  The birthing ground is the Kerama Islands, which brings back the reasons for the whale watching tours.  The mother whales take care of their calves for 10 months to a year.  There are no “love” relationships between whales, who quit feeding during the mating and breeding season, concentrating on courtship, mating, giving birth and then raising the calves.

The male whales become very aggressive during the mating season, fighting for the females’ attention, including using their ‘song’ a series of refrains of low and high tones that last 6~35 minutes.  Scientists believe the ‘song’ is used both for courtship and for territorial display.