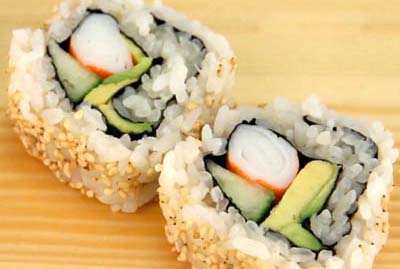 California Roll is the invention of sushi chefs in the U.S. to make a sushi roll more palatable to American tastes.

The history of sushi began in the 8th century.  Due to the fact that there were no refrigerators, people making sushi would preserve the fish and rice a little differently than they do today.  This preservation process included fermenting the rice in order to preserve the fish, however, the rice would be discarded.  As the technique improved, vinegar was added to the rice and the salted raw fish was eaten along with the vinegared rice.

Sushi as we know it today was invented by one Yohei Hanaya in the Tokyo area around 1799-1858.  It was originally a snack intended for people living extremely busy lives in Tokyo.  It’s hard to believe people were as busy in 1858 as they are now in the age of advanced technology with pressures to perform as fast as possible, but it’s true.  And these busy people needed food “on the go”.  Sushi was considered a form of fast food that could be eaten in public. 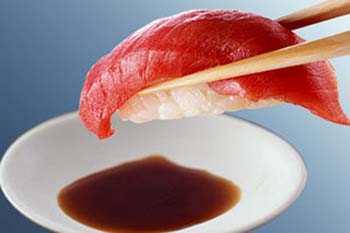 Nigiri sushi comes to most people’s mind when they think about sushi.

Sushi was first introduced to the United States in the mid 1960s in the “Little Tokyo” neighborhood of Los Angeles.  The California Roll was invented in Los Angeles, and it became popular by substituting a slice of avocado for the usual seasonal toro (fatty tuna) that’s in a traditional maki roll.  While sushi gained growing popularity, sushi chefs from Japan seeking to make their fortune in the United States saw opportunity and injected a bit of Japanese-American fusion into their traditional sushi recipes.  Traditional sushi rolls are normally wrapped with nori (seaweed) on the outside.  Sushi chef Ichiro Mashita eventually made the roll “inside-out” because North Americans did not favor chewing the nori on the outside of the roll.  This contributed to sushi’s popularity in the United States, transitioning diners into more “exotic” sushi options.  Since then, many chefs have devised many variations of the California roll. 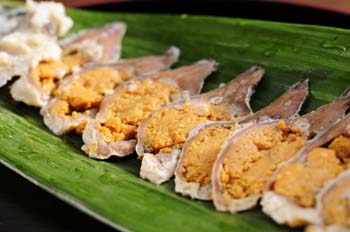 Funazushi is a specialty fermented sushi nowadays available mostly in Shiga Prefecture only, although it’s actually the mother of all sushi.

Traditional late-night sushi restaurants became popular in Tokyo in the 1900s but the items on the menu were not identical to today’s varieties in Japan. Back in 1900s the fish meat was marinated in soy sauce or vinegar or heavily salted so there was no need to dip it into soy sauce. This sort of smashes the conception that North Americans overly salt or spice their food. This sushi was practically all salt flavored. This was partly out of the necessity as there were no refrigerators. Each piece of sushi was also larger, almost the size of two pieces of today’s sushi.

The advent of modern refrigeration allowed sushi made of raw fish to reach more consumers than ever before. This also changed the techniques of preparation of sushi, hence the disappearance of the heavily salted type of sushi.

Over the late 20th century, sushi has gained popularity all over the world.  Although the original concept and preparation of sushi has changed greatly from it’s earlier methods, today the word “sushi” is still associated with Japan – from a marketing approach and overall tradition.  Because of sushi’s compact nature, it is considered an easy snack, akin to “fast food”.  Best of all, it is healthy and full of protein.  With sushi’s increasing popularity and moving from exotic to mainstream, you could one day even see it on a McDonald’s menu, maybe even as a sushi hamburger with wasabi and soy sauce instead ketchup or mustard!