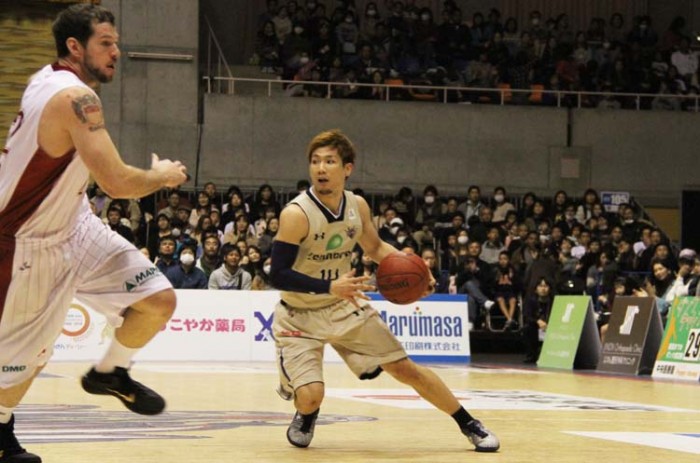 The Shimane Susanoo Magic hosted the Basketball Japan League reigning champion, and threw a surprise at the Ryukyu Golden Kings.

The middle-of-the-pack Susanoo Magic improved to 12-23 with an upset 77-71 victory over the Western Conference leading Golden Kings in their series opener at Matsue, Shimane Prefecture.  Anthony McHenry led Okinawa in the loss with 15 points, while Draelon Burns and Morihisa Yamauchi both picked up 11. 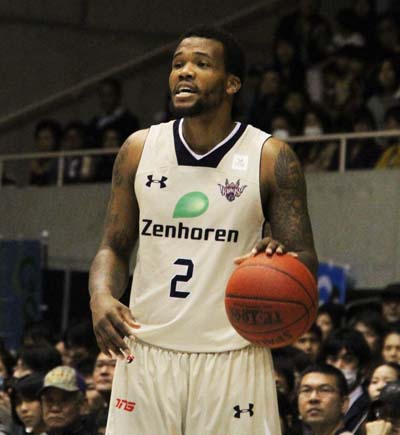 Draelon Burns went on tear in Sunday’s game to avenge the surprise Saturday loss to Shimane.

“From the beginning, we let Shimane get a boost,” said Golden Kings head coach Tsutomu Isa.  “They closed the first half and we lost the chance to turn the game by mistakes a chasing team should not do.” Shimane head coach Tomohiro Moriyama was pleased with his “players playing patiently,” and was happy with “the good defense” that let his squad stay on top as Okinawa tried to bounce back and recover in the second half.

Sunday was more to Okinawa’s liking, jumping off to a quick lead and never looking back.  Draelon Burns headed the Golden Kings parade with 5-of-6 shots from three-point land as Okinawa punished Shimane 100-69.  Ryuichi Kishimoto picked up 19, Anthony McHenry tallied 15 and hauled in nine rebounds, while Kibwe Trim tacked on a dozen points and seven rebounds of his own.

It was Okinawa coach Isa’s turn to praise players for playing patiently in “a team win.”  Shimane’s team leader Moriyama said “the Kings learned and studied us, and we didn’t play the same as yesterday.”  The Golden Kings are now 30-6 on the season.

Elsewhere in league action, Tokyo’s Cinq Reves almost ended its dry spell in Musashino, but the Saitama Broncos held on for an 87-85 win Saturday.  A day later, it finally worked for Tokyo; they beat up on the Broncos 89-61 to end an 18-game losing streak.  Tokyo is now 5-29, while Saitama is 4-30.  The Toyama Grouses were on a weekend roll, outlasting the Yokohama B-Corsairs 75-69 on Saturday, then coasting to a 90-66 win on Sunday.  The Grouses are 26-10, while Yokohama falls to 8-26.

The Shiga Lakestars extended their conference record to 22-11 with a 78-73 win over the Osaka Evessa in Moriguchi, Osaka Prefecture Saturday.  The Evessa took control Sunday, improving to 22-14 with a 66-62 win.  The Osaka squad is now 22-14.  The Shinshu Brave Warriors outlasted the Gunma Crane Thunders 99-88 on Gunma home turf Saturday, but couldn’t hold on Sunday, losing 98-73. Shinshu is now 14-20, while the Brave Warriors are 14-20 as well.

The Kyoto Hannaryz smashed the Nara Bambitious twice over the weekend to improve to 30-6 on the downhill side of the season.  The Hannaryz won the first   78-58, then polished off Nara 78-53 on Sunday.  Nara is now 10-26.  Fukuoka Rizing split a series with the Oita HeatDevils, losing the opener in Oita 94-86, before rallying Sunday to win 83-81.  Oita is 13-23, while Fukuoka is not in the playoffs running with an 8-28 record.  The Hamamatsu Phoenix rolled to a pair of wins over the Takamatsu Five Arrows to tie Okinawa for the Western Conference lead.  The Phoenix won the opener 97-85 in Zentsuji, Kagawa Prefecture, then had to fight for a Sunday victory 76-73.  Hamamatsu is 30-6, while Takamatsu is 10-26.

The Aomori Wat’s also picked up a sweep in their series with the Fukushima Firebonds. The Wat’s won the opener 83-78, and closed out Sunday with an 89-70 shellacking to extend its record to 19-17.  The Firebonds are now 12-24.  The Iwate Big Bulls won both ends of its series with the Sendai 89ers, but required overtime to take care of the Sunday score.  The Big Bulls picked up a 95-82 win Saturday, and battled to the 89-83 Sunday overtime victory to extend its season record to 29-7.

The Akita Northern Happinets split its series with the Niigata Albirex BB, picking up a five-point Saturday win, 82-77, before losing Sunday 93-83.  Akita is now 29-7 while Niigata is 22-14.