The sheep becomes king next Thursday as the Lunar New Year begins. 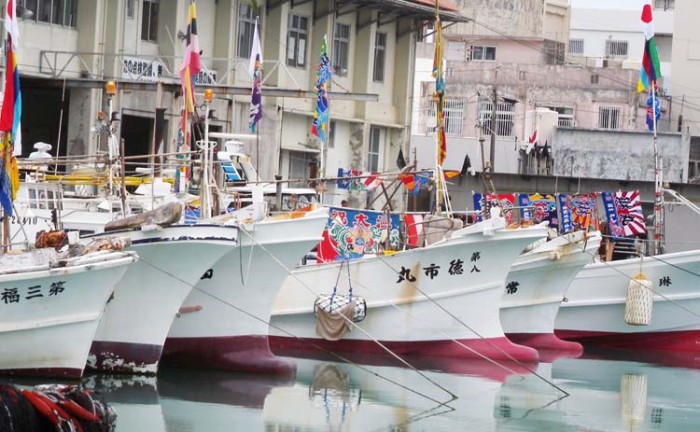 Old calendar traditions are both common and popular in Okinawa, where fishermen will hoist special flags to adorn their boats in hopes of a big catch.  Across the prefecture’s fishing communities, the sense of hustle and bustle will be evident as people scurry about buying ingredients for the Lunar New Year’s feast.

The Zodiac is a bit complicated this year, with Chinese viewing it as the Year of the Sheep, or the Year of the Ram, or the Year of the Goat.  They all count.  This Year of the Sheep follows the year of the Horse, an astrological sign of people who are popular, cheerful, hardworking, intelligent, friendly, and strong lovers, who like music and entertainment, and ones who manage money well.  People born under the sign of the horse are also said to be impatient, act hastily and have short tempers, often think of themselves as more important than others, selfish and egotistical.  That’s over next week, and the docile sheep takes charge. 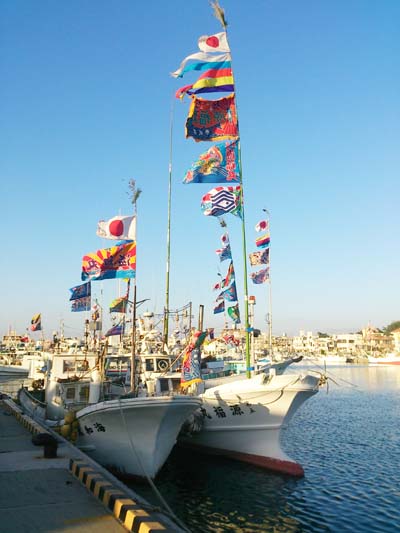 People born in the year of the Sheep are tender, polite, filial, clever, and kind-hearted. They have special sensitivity to art and beauty, faith in a certain religion and a special fondness for quiet living. They are wise, gentle and compassionate and can cope with business cautiously and circumspectly. In their daily life, they try to be economical. Women born in this year are willing to take good care of others, but they should avoid pessimism and hesitation. They are kind in heart and commonly have symmetrical figures and features.

On the other hand, Sheep year people are described as worrywarts who are also shy, pessimistic, moody, indecisive, over-sensitive, weak-willed and puzzled about life. They are easily inclined to be deeply religious, and are timid in nature and like to be looked after by others. They like flattery, compliments and suggestions from friends but do not dare to express their love openly and usually have interests in strange theories.

Unless someone ventures into Itoman City this weekend, it’s unlikely that anyone would realize that Thursday is Lunar New Year. The Lunar New Year, also known as the Chinese New Year, is celebrated on a grand scale in Taiwan, China, Korea and a few other countries that traditionally count time using the lunar calendar.  In Okinawa, mainly Itoman City celebrates the lunar new year, and even there, it’s not all that big a thing.

In Okinawa the celebration of the lunar New Year centers on fishing towns and villages. Although it was celebrated in pre-war days, following World War II the Ryukyu government recommended shifting to celebrate the new New Year, and celebration of the Lunar New Year decreased. In locales where fishing is prosperous such as Itoman city and O Island, the lunar-calendar is an event that still remains. At a fishing port, many colorful good-catch flags are hung up over fishing boats, and the bumper fish crop for one year and the safety of voyage are prayed for.

Food remains a key element of celebrating the lunar new year, with a mandarin orange and charcoal rolled with kelp offered on a Buddhist altar, while people pray to it with hands joined. After that, people eat pork dishes, such as the soki soup and suchikah, pork preserved in salt. Refrigerators weren’t common in the past, either, so salt was a common part of the diet. Customs were different, but as a means to save meat, since preserving in salt was used, the custom of eating Suchikah remains from the time when pork was eaten only at special events.

Since the mandarin orange is viewed as an offering and is orange in color, it expresses prosperity, and since charcoal does not deteriorate, a healthy long life and kelp are offered as “Yorokonbu.”  Yorokobu means being glad, konbu is kelp in English.

Lunar new year traditions vary from country to country across Asia, but in most, it is the year’s biggest holiday.  In neighboring Korea, the Je-sok, or New year’s Eve, is the night of the last day of the twelfth month, at a time when the moon is nearly hidden.  Koreans break out the starched and ironed white holiday clothing, while children are adorned in bright, colorful costumes.  Everyone’s up early for the lunar new year, with women heading to kitchens while men gather in order of family seniority to join in ceremonies, pouring wine, and preparing for the feast.

The men make the rounds of friends and relatives after the meal, welcoming the new year.  The women stay home.  In the evening, torches are lit throughout the house to keep the evil spirits away.  There are also ceremonies honoring ancestors, where tea and sake are placed in front of the ancestral tables.

China is similar, with family gathering on the new year’s eve to exchange gifts and eat.  New Year’s Day is dedicated to both feasting and visiting relatives.  On the second and third holiday days, everyone visits friends and acquaintances.

Taiwan’s version of the lunar new year runs longer, starting earlier and running two weeks after new year’s itself.  Taiwanese have a Feast of Lanterns this year on March 5th.  By Taiwanese tradition, household deities must leave the earth and go to heaven to file reports on the earthly folks, and the sending begins with sacrifices to guarantee peace and good fortunes in the coming year.  Paper money is burned, fire crackers are lit off, and feasts are held with rice pudding offered as a gift to friends and relatives.

Tet is the Vietnamese New Year, and follows the basic pattern of other countries.  Ceremonies begin the afternoon of lunar new year’s eve, with sacrifices offered to ancestors, together with an invitation to return to earth for a brief period.  Midnight launches Gao Thua, a sacrificial ceremony for ancestors, after which families offer new plant buds as a sign of good fortune for the new year.

Vietnamese celebrations go on for days, and sometimes for a week.  On the other hand, Losar, the Tibetan New Year, is quick and fancy.  It’s the biggest holiday of the year in Bhutan, with special dances performed with Buddhist monks and specially trained dancers wearing intricate masks.

Ladakhis celebrate over a five-day period in Tibet, starting on the second to last day of the old year.  Men’s good and evil deeds are measured during the period, with a time of repentance for sins and prayers for better behavior in the new year are offered.