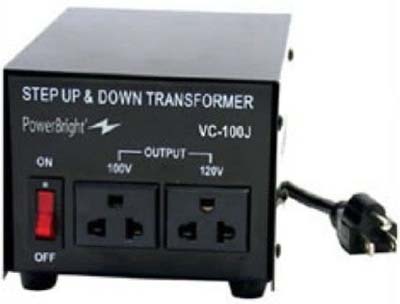 Although voltage in Japan and U.S. are close enough that most home appliances work properly, sometimes a transformer is necessary.

I recently purchased a professional flash for my camera.  The first time I tried it and it didn’t work properly, I assumed it was user error.  After hours of trying to figure out why the flash would only give out partial flashes, I began to suspect the product might be faulty.  However, I refused to give up, and as a last resort, asked professional photographer, Pete Leong of FotoShisa Photography, to help me troubleshoot.  They say two heads are better than one and, sure enough, we finally came to the conclusion that the problem was actually a difference in power voltage.

Living on Okinawa, I don’t usually buy North American appliances, so a difference in power voltage was the last thought on my mind.  In Japan the power voltage and frequency is different than North America, although not much.  Japan runs its outlets at 100 volts compared to North America’s 120 volts.  The electrical frequency is also a bit different, and actually even varies within different areas of Japan.  Hertz are a unit of frequency of electricity, and how your electronic device receives electricity.  The eastern part of Japan (Tokyo, Yokohama, Tohoku and Hokkaido) runs on 50 Hz while the western part of Japan (Nagoya, Osaka, Kyoto, Hiroshima, Shikoku, and Kyushu) runs on 60 Hz.

To solve the problem of my flash not receiving enough voltage, in basic terms I needed 20 more volts of power.  I realized I had to purchase a transformer.  A transformer can step up the electronic juice from 100 volts to 120 volts so that the device can get the extra power that it needs.  However, in reverse terms, if you were taking your Japanese rice cooker to the United States and simply plugged it in, you would be giving your rice cooker too much power.  The rice cooker would probably break, burn your rice, or even catch a fire!  In this case you would need the transformer to step down the power to 100 volts so that it could receive 20 less volts.

After researching volts and hertz and transformers, I began to wonder about prongs on plugs, and what the difference is between a 2-prong and 3-prong plug and outlet.  In Japan all outlets are made for two prongs and in North America most outlets are for 3-prong devices.  Why the difference?  Well, the 2 prongs on both Japanese and North American devices do exactly the same thing; they grab the power.  The third rounded prong on the North American device is a safety device. The purpose of the third prong is that it 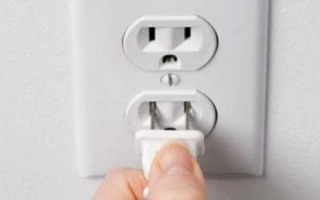 U.S. plugs and sockets have three prongs, the third being safety device to ground the circuit in case something goes wrong.

grounds the electricity that could be conducted from the metal-encased power supply inside.  Some people actually saw off this third grounding prong in order to make their North American electronic device work with the 2-pronged Japanese outlet.  However, if the wiring all of a sudden became loose inside this ungrounded device, the metal casing around it would be a conductor, giving you what could be a fatal shock.  This is why it is not a good idea to cut off the ground plug, even though your device will still operate.

The good news is that a lot of products have the option to work with different types of voltages.  Companies know that people travel, and a product becomes a very attractive option if you can bring it to another country and simply flip a switch to change voltages.  Unfortunately in my case, the photography flash that I purchased did not have this electronic voltage option built into the design.   However, my problem can be solved with a transformer.

In conclusion, keep in mind the voltage differences between Japan and North America when you are using your electronic device, and never saw or cut off the third prong in order to make it fit into Japan’s 2-pronged outlet.  The dangerous shock you may receive is not worth it!