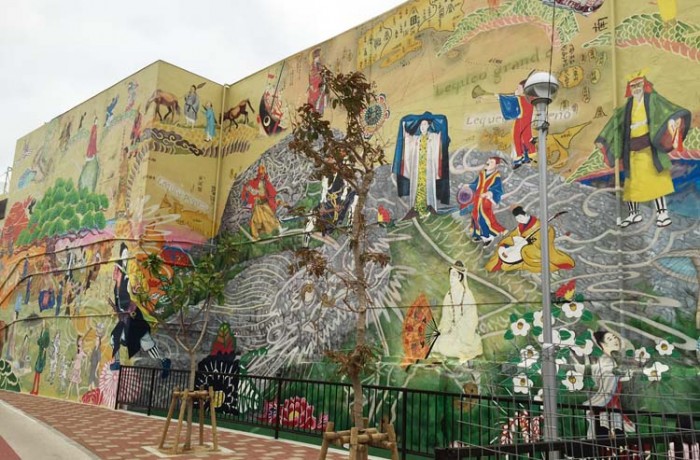 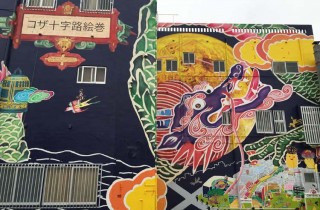 The city government has been working on this project since last summer in order to create the new symbol of Okinawa City. The site is at Koza Crossing on Route 330 in Okinawa City. Construction of street extensions and land adjustment around the area by the city government since 2011 has resulted in the entrance to Gintengai Arcade Street changing as buildings were torn down into what is now empty space. The city decided to take advantage of the space in order to revitalize the area.

The total length of the huge painting is 180 meters, and the theme is the Koza Crossing history from the past to the future. The mural begins with the Ryukyu Kingdom era, before and after the wartime era of Koza and flourishing Machigwa period have been painted on walls in Japanese scroll painting style. A total of seven people, a combination of amateurs and professionals, have worked on the project since last June, taking more than six months to finish. They traced about 500 real scale designs and drew line by line. 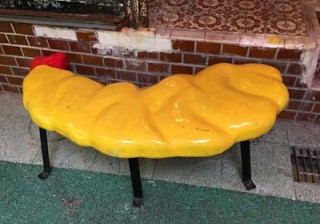 New benches in Ginten Mall are modeled after tempura.

In the open space, a bus stop that was designed by ‘Machikaji’, a local traditional snack eaten at engagement ceremony, and Tempura motif benches are set up at the arcade.  On January 31st, the ceremony to celebrate the completion of the wall paintings took place.  Food stalls and live music  together with some hands-on events for kids entertained people in Gintengai.  The Okinawa City Tourist Association is planning to hold events at the site and promote the wall paintings to revitalize the area..