Everyone in Nishihara Town thinks education, with a couple of universities and a junior college within its boundaries, and there’s a high school famous for its marching bands prowess, as well. 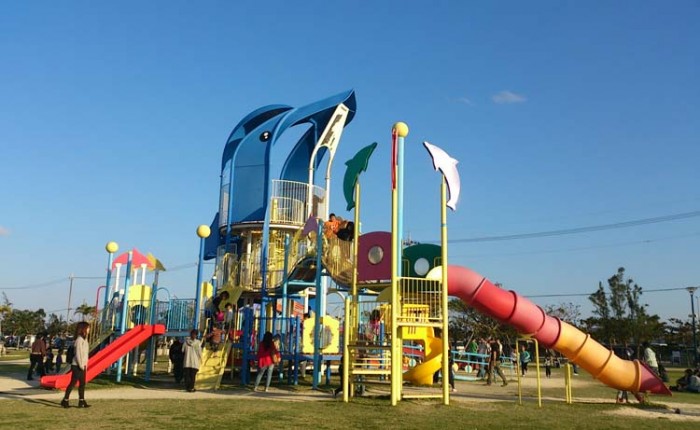 The University of Ryukyus, the only national university in Okinawa, is in Nishihara, as are Okinawa Christian University and Okinawa Christian Junior College. Nishihara High School is there, and it is very famous for it’s marching band. Nishihara High has more than once won the grand prize for the All Japan High School Tournament.  It’s volleyball and football clubs are often in the news, too, as being among the best in Japan. For pretty obvious reasons, Nishihara Town’s nickname is “Educational town Nishihara”. 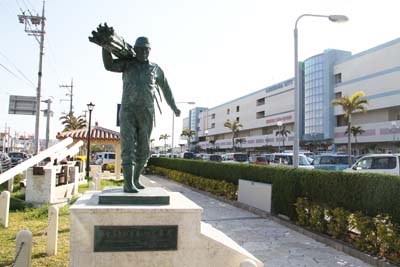 Nishihara used to be the top producer of sugar cane in southern Okinawa.

There is one element of confusion in the town’s name; “Nishi” means “West” in Japanese and “Hara” means “Field”, so if one guessed Nishihara means a field in the western part in Okinawa, they’d be right, right?  It is not. Actually, Nishihara is located in eastern Okinawa.

Why is it then Nishi even if it’s located on the east side of the island? It’s because of Okinawan dialect. In the old days — and still older persons today — use “Nishi” for its Okinawan meaning “North” although it means “west” in Japanese. Thus, Nishihara is located north of Naha, specifically from Shuri Castle, so it has been Nishihara since ancient times.

During World War II, the Japanese military built an air base at Nishihara by the ocean, but before it was completed, the area was taken over by U.S. Military forces and after the war, used as a U.S. Air Base for a while. After it was returned to Okinawa, the area became an oil storage area and a location to some factories and sugar cane fields. After the war, the area was famous for sugar cane production, and boasted having the largest sugar mill in the southern part of Okinawa until early 90’s. That area has been home to San-A Nishihara City shopping center since 2003.

Katsuki Matayoshi, a professional baseball player playing with the Chunichi Dragons, hails from Nishihara High School. He was chosen to Samurai Japan (All Japan team) just a few days ago, becoming the first player chosen for the All Japan team ever from Okinawa. 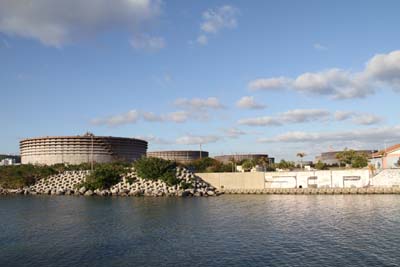 Nishihara has a large industrial area on the coast including an oil refinery.

The bay area of Nishihara and Yonabaru Town has seen the building of a new town project and has one of the fastest growing populations on Okinawa. Nishihara Town is also the home for some big factories, and represents the highest value of shipments of any town in Okinawa. Major companies include Nansei Sekiyu, an oil refinery, Kanehide group, Okiko bread maker, Morinaga dairy industry, Ishikawa distillery and several more. Some of the companies accept visitors for back yard tours.

From a historical perspective, Nishihara has interesting stories. King Sho En, the first king of the second Sho dynasty, stayed at Nishihara Uchima Udun for a while after King Sho Taikyu passed away. Sho En whose original name was Kanamaru was the chief of staff of King Sho Taikyu, and was assigned the Lord of Uchima in the Nishihara area. The Uchima Udun still exists and even under renovation, and is considered a holy place for not only people of Nishihara but all Okinawa.

Included among historical assets in Nishihara Town, is the old Miyazato house, which is located in the Tanabaru district, and is very interesting. Very old toilet rooms still remain, which are open roofed where pigs fed in the same space and ate human stool. The relationship between Okinawans and pigs has been around for ages and pork is still a very important ingredient in Okinawan cuisine.

Nishihara city is also famous for its many places to relax and kid to play. The Dolphin Park next to the man-made Nishihara Kirakira beach.  Uehara Takadai Park is located at the upper hilly part of Nishihara Town, and is very popular with kids. Nishihara Athletic Park is huge and good for jogging or walking, and Nishihara Park golf is a place for residents to enjoy ground golf, also known as croquet. 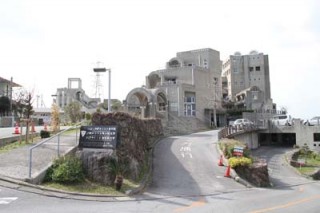 Okinawa Christian University and Okinawa Christian Junior College are located on the same campus in Nishihara Town. Both are private universities, and operate under the common administration. The Christian Junior College was established in 1957 in Shuri, much earlier than the Christian University that was established in 2004. The schools have a strong appeal because of their extensive English communication courses. Many students continue their education overseas after graduating from these institutions, and many of their own graduates work at the schools as English speaking staff. 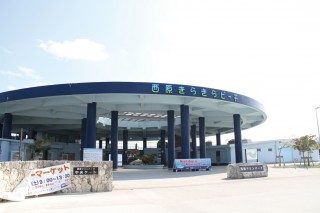 Nishihara Marine Park is an expansive seaside park in Nishihara town. Within the park, there are the man-made Kirakira Beach, sports grounds with lighting for night games, huge BBQ facility area that has 19 cabanas with space for 684 people, outdoor stage and kids’ playground. There’s also a food court in the main gate building, and pay showers and coin lockers. A rather large free parking lot is available but it’s usually very crowded, especially during the summer season. 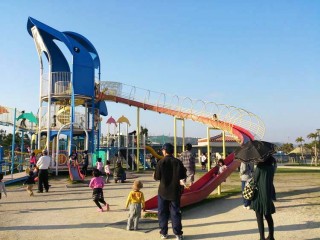 Dolphin Park is a large children’s playground located at next to Nishihara Marine Park. The playground equipment is shaped like a giant dolphin and that gives the park its name. The park is very popular with local residents, and a lot of families visit especially on weekends. The park features many slides, roller slides, a Tarzan rope, and plenty of other fun equipment. A huge playground is good for playing catch ball and football. Toilets and parking are available, too. 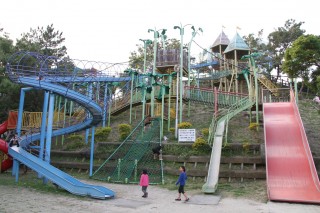 Ueharatakadai Park is located in the Uehara district of Nishihara Town. “Takadai” means “upland” in Japanese, and the park is literally located upland on a hill from where one can see a great view of Nishihara Town. The park is located in a residential area, and plenty of families bring their children to play in the park on weekends. There’s a variety of playground equipment including a giant slide that is very thrilling and fun! In addition to playground equipment there is a large playground field and many places to rest and relax. 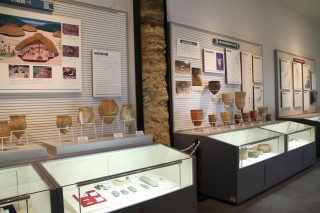 Okinawa Prefectural Archaeological Center is located near the University of the Ryukyus in Nishihara Town. Okinawa Prefecture is surrounded by the ocean, has abundant nature, and can trace its history back to the days of the Ryukyu Kingdom and beyond. Many of the historical sites and buildings were damaged or destroyed during the WWII but a huge number of antiquities are still in the ground. The center opened in 2000. It offers a place for researchers, and works as a preserve for the antiquities. The center is open for public for free, and you can see and learn a lot from its collections. It’s open 9:00 – 17:00 with the last entry at 16:30, every day except Mondays, national holidays, Okinawa Peace Memorial Day on June 23rd and the New Year holidays.

Uchima Udun is a historical house that once was the residence of King Sho En, the first King of the second Sho dynasty. When he was the chief of staff for King Sho Taikyu, he was assigned the position of the Lord of Nishihara district. After Sho Taikyu died, Sho En retired at Uchima Udun for a couple years until he became the King in 1470. He moved to Shuri to take the crown, and the Royal Ryukyu Government declared the site a holy place sometime in the 17th century. The stonewall on the site was built in 1737. The Uchima Udun was named a government-designated excavation site in 2011. 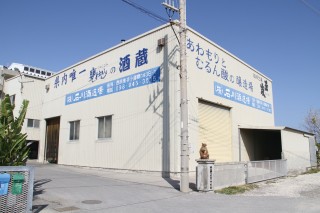 Ishikawa Distillery is the only Awamori distillery in Nishihara Town. But more significantly, it’s the only Awamori distillery in Okinawa, which is making Awamori in huge jars called “Kame” from the beginning in the old traditional way. The main labels produced by Ishikawa Distillery are “Shima-kaze”, “Urizun”, “Kame-jikomi”, and “Gyoku-yu”. They also produce “Moromi-su” soft drink that is made from “Moromi,” a secondary product of Awamori distilling and contains plenty of citric and amino acids. It is said that the acids are very good for human energy and metabolism. 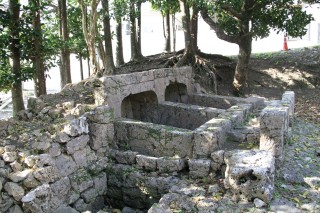 Miyazato house is one of the old, traditional-style, historical houses on Okinawa, located in the Tanabaru district of Nishihara Town. The Tanabaru district is home to many historical assets, and visitors can feel very nostalgic atmosphere permeating the air there. Actually, most of the Miyazato house structure was broken during the war, but the house base still remains. Especially, the old bathroom is in good condition. The house and its surroundings was designated a Historically Significant Site of Nishihara Town in 2014.