During the fall and winter months in Okinawa you may have heard a dull moan calling from a slowly passing truck and wondered what was happening. 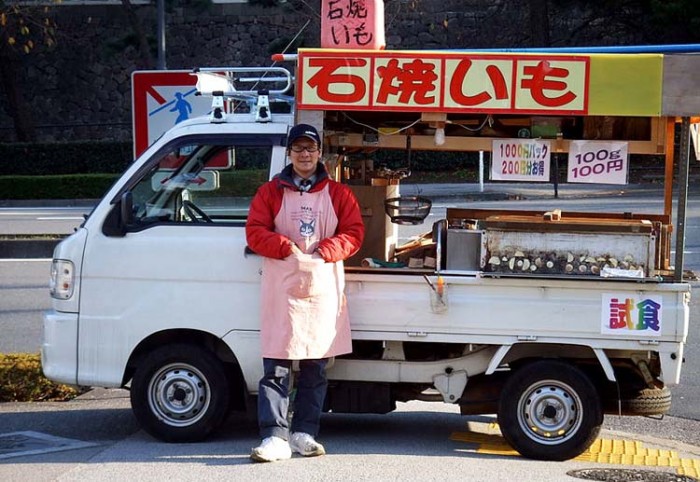 Trucks like this roam Okinawan neighborhoods selling hot sweet potatoes fresh from the roasting oven on the bed of the truck.

This slow rolling truck is a far cry from the exuberant jingle of the ice cream truck and I have never seen children rush out into the street, money clutched in hand, chasing after the truck and the treats that it beholds. That would be because the slow rolling truck is calling out ‘Ishi-Yakiimo-ya’, which means ‘Hot sweet potatoes for sale!’ 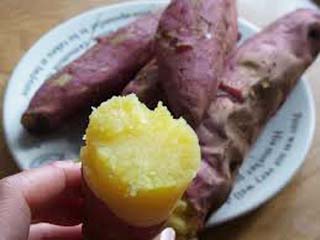 At first, I had no clue what these trucks were selling but as I continued to study Japanese and had developed enough linguistic ability to ask the locals about these mysterious trucks, I became very interested in stopping a truck to purchase some sweet potatoes for myself.

Having grown up in North America, I had only ever experienced eating sweet potatoes at dinnertime so the timing for my first ‘hot sweet potato experience’ was vital.  Finally, one late afternoon just before sunset, I heard the dull moan of the slow truck calling out as it rolled through the neighborhood and I stopped him.  For the price of 500 YEN ($4.25), I was delighted to behold something hot and edible in my hands since it was such a cold and windy day in Okinawa. I opened up the foil wrapping and nestled inside was a plump, purple skinned potato.  At the first bite, I was pleasantly surprised to discover how sweet, delicious and healthy this snack actually was.

The hot sweet potato is an excellent snack to introduce to children after they have been out playing all day in the park.  It quickly fends off their hunger pains, satiating them long enough to give you the time you need to prepare dinner. The fact that there are no extra additives or unnatural sugars makes this snack a much better option than giving your children pop tarts or other pre-prepared foods that play a major role in the development of bad eating habits, sugar dependency and health problems such as diabetes.

In Japanese, we call this purple potato ‘satsumaimo’ and in North America we call them ‘yams’ or ‘sweet potatoes.’  These large, sweet tuberous root vegetables come from a flowering plant. In North America, they are most often eaten as a side dish on Thanksgiving or tossed into hearty stews and soups.  In Japan, they are used in all sorts of dishes such as Imo Gohan which means ‘Potato Rice’, or another popular dish from the Kanto region called Daigaku Imo meaning ‘University Potato.  In Daigaku Imo, the sweet potatoes are deep fried, then candied in a sweet salty syrup and sprinkled with toasted sesame seeds. This snack originated in small eateries that had sprung up around major university campuses in the Tokyo area.  The easiest and most healthy way to enjoy satsumaimo is to steam or bake them.  There is no need for a special roaster.  Satsumaimo are flavorful enough to eat without any addition, although many people prefer to sprinkle them with salt or a little butter to counter the sweetness.

With this freshly acquired knowledge in mind, the next time you hear the haunting dull moans calling from a slow rolling loud speaker truck, have no fear.  It will most likely be the local Hot Sweet Potato truck cruising by to share a healthy taste of the local cuisine. I highly recommend that you stop the driver and purchase enough of the sweet potato treats wrapped in foil for the whole family to enjoy.  You might find yourself craving ‘Ishi-Yakiimo-ya’ on those cold windy days and start a healthy new family snack tradition.