Memories are made nightly at Gold Disc 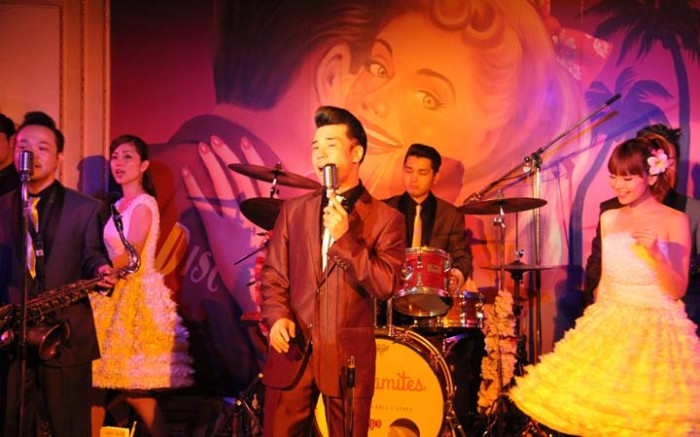 Everything down to duck and ponytails is down the memory lane to the 50’s at Gold Disc.

‘Do You Wanna Dance?’ “Ever been to ‘Heartbreak Hotel?’  Think you could ‘Stand by Me?’

If these titles tickle your brain, then you’re well in tune with the Golden Oldies of yesteryear.  Those memories are here and now, at Okinawa’s Oldies live house Gold Disc in Matsuyama, Naha, playing out nightly with nostalgic 50’s and 60’s style hits.  From Bill Haley’s ‘Rock Around the Clock’ to Buddy Holly and Elvis Presley, it is pure yesteryear entertainment at Gold Disc.

The band members are decked out in 50’s ~ 60’s style suits and circular skirts, ducktail or pony tail hair styles. An even guests at Gold Disc simply cannot avoid being transported back to the golden days of rock ‘n roll. Gold Disc was formerly known as Kento’s, a spot where nostalgic Americana ruled and thousands of Okinawans first got their real taste for American music.

Today, Gold Disc is popular for Okinawans, and not only among the older generation, but young folks, too. For tourists, the American style in Okinawa is an attractive part of the lure to Gold Disc, but because Kento’s brand is popular across Japan, it’s anyone’s guess who’ll be there on any given night.  It’s a live house, where patrons can enjoy an evening in a relaxed nostalgic environment. It’s not a noisy live house, but easy on the ears as people sit back, and listen to the good old songs.  Off course, everyone can bounce out of their chairs to dance, twisting like Chubby Checker, or cheek dancing with a partner by Elvis Presley’s ballads. 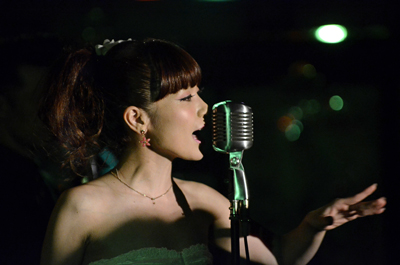 Dynamites’ singer Aya belts out any Connie Francis number you can request.

A special off-site show is slated for later this month, as Gold Disc’s regular band, the “Dynamites”, will perform at the Ie Lily Festival. The Dynamites will be presenting a free show at 7 p.m. on April 26th.

Gold Disc is located in the basement floor at 1-14-19 Matsuyama, Naha City. Yen and major credit cards are accepted. Reservations can be made at (098) 868-1268, or on the website http://gold-disc.net. Check the map: https://goo.gl/maps/MDDLx for the location.