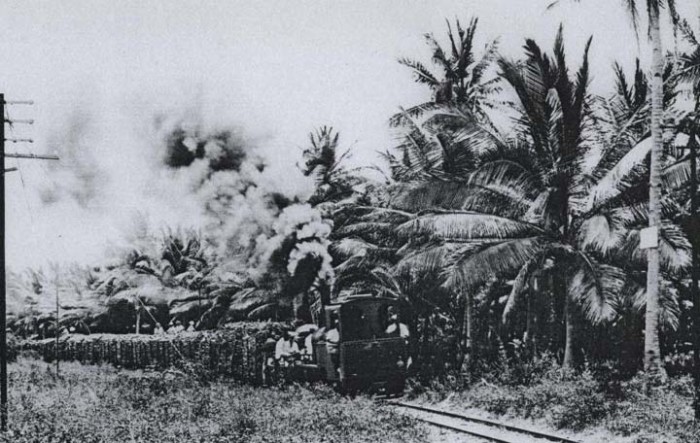 A train pulled by a steam locomotive hauling a load of sugar cane.

When we think of progress and the changing times we have traditionally considered that a successful system would develop along the “more, bigger, faster, better” paradigm.  But when considering the history altering events that can affect the path of systems growth, progress rarely moves in a straight line.  The Okinawa rail transportation system is a perfect example of this cause and effect.  Taking a look at the now and then of our rail system we hope to expose the reality of where the system needs to go in the future as well as how it even came to be in the first place. 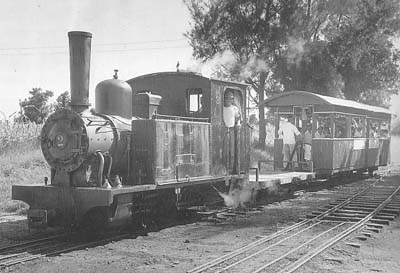 The trains carried both freight and passengers.

With the global buzz around the development of sustainable transportation systems, it is a good idea to take a look at the public transportation systems of our island.  The only current train system on Okinawa happens to be the Okinawa Urban Monorail in Naha, commonly known as the “Yui Rail.” Its construction began in 1996 and the Yui Rail started running in 2003.  Following the precedents set by earlier monorails built in Japan, the Naha dual-beamed line connects city points with the Naha Airport.  It was created to provide a more effective public transportation system option to the infamously inefficient bus system.  Riding the Yui Rail is an easy and practical way to get around Naha for sightseeing or on business. Most other places around Okinawa, it is necessary to rent a car or take a taxi. 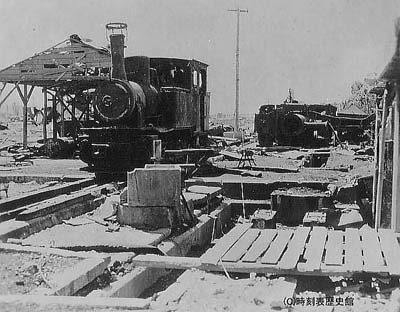 The war left Okinawan rail system in ruins and it was never re-built.

The Yui Rail system is the first rail system on the island of Okinawa since World War II.  Currently, the Yui Rail tracks run for a mind-boggling 12.8km. Beginning at Naha Airport and ending at Shuri Castle Station, there are a total of 15 stations along its length.  Each monorail train has 2 cars with 65 seats and the capacity to hold 165 passengers.  The line runs northeast through the city center. The guideway terminates at Tera. End to end journey time is around 30 minutes. Trains run every six minutes during peak periods. Following a precedent set almost a century earlier in Wuppertal, part of the line follows along a river channel.  In 2012, a 4.1-kilometer extension was approved. The line will get an extension from the Shuri Station at the northeastern end of the line, and its completion is expected by 2019.  Considering the fact that Okinawa Island is about 112 km (70 miles) long and 11 km wide (7 miles), there is quite a ways for the rail to go in order for it to meet the needs of all people on Okinawa and become a truly sustainable transportation system.

Considering the modest route of Okinawa’s only current rail system, it is hard to believe that in the past, Okinawa Island had a railroad, trolley system and even horse-drawn streetcar services.  The first railroad with handcars was built in 1902.  In 1910, the railroad opened for the purpose of transporting sugar cane.  During the Taisho period (1912-1926), there was competition between private and prefectural government development of electric trolley and railroad systems.  By the end of this period, the prefecture completed a railway system that had three lines radiating from Naha: one to Kadena, one to Yonabaru, and one to Itoman. Okinawa Electric also extended its routes with a ‘state-of-the-art’ horse-drawn trolley linking Naha and Itoman. This was the peak of the rail system on Okinawa.

After the WWII, under American occupation, great improvements were made to the roadway infrastructure across Okinawa.  This led to a major increase in automobile traffic.  The aerial bombardment and the ensuing ground war had completely devastated the railway systems, and there was no reason to attempt to rebuild the narrow gauge rail lines that had existed before.

Prior to the World War II, railways were in use in various places, but all disappeared during and after the war. Locations included what are present-day Nishihara, Kadena, and Itoman. The islands of Ishigaki and Miyako also had lines to move sugar cane, and Iriomote had handcar lines for the coal mines. Kita and Minami Daito Islands had similar lines for phosphate mines.  After the return of Okinawa to Japanese administration in 1972, the prefecture considered plans to develop rail lines, which eventually lead to opening of the Okinawa Monorail in August, 2003.

As you can recognize from the historical trajectory of the Okinawan railway system, historical events such as the invention of the trolley, gasoline car, development of roadway infrastructure and devastation of the railway system due to the tragedy of war sent the development of a public monorail transportation system on a ‘joy ride.’  Although the monorail is efficient for those who live within range of the system, it might be time for Okinawa to consider the development of a tip-to-tip sustainable public transportation system. We all enjoy the freedom offered by the ownership of a car but imagine the freedom we would be granted without the cost associated with the car ownership, and the cost that this has placed on the sustainability of the natural beauty of our island.