Yaese is a new town created by the merger of Kochinda Town and Gushikami Village in 2006, the name originating from the Yaese hills within the town limits. 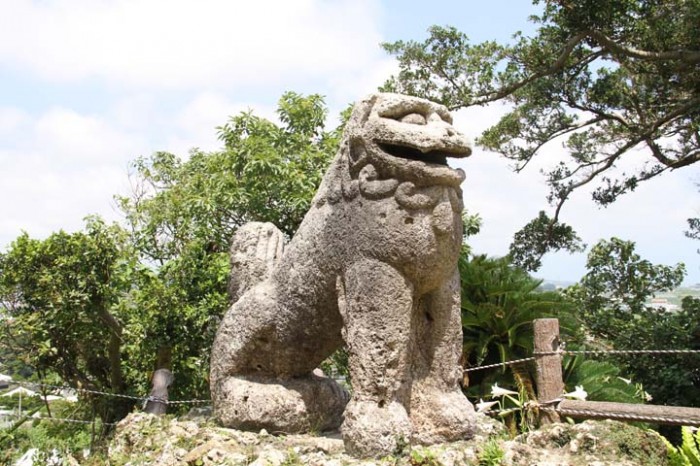 Yaese Town is located south of Tomigusuku City and also Haebaru Town, east of Itoman City and west of Nanjo City. South of Yaese is the Pacific Ocean. The landscape of Yaese is undulating and makes for a superb view, especially its ocean coasts that feature high cliffs, which offer a panorama ocean views. The area’s quite well known because of a super high cliff where many people jumped to their deaths to escape the U.S. Military during the Battle of Okinawa in 1945. It is a sad place also, but the town people are very friendly and peaceful, and the urban side of the town is developing rapidly. 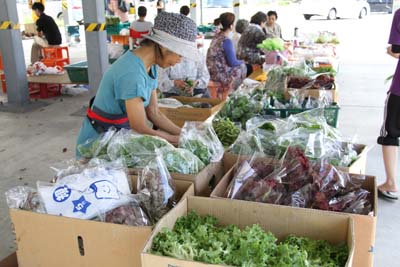 Yaese is an important farming area and proud of the fresh vegetables and fruit it produces.

On the other hand, most of the town is still country and a very, very relaxing. Huge sugarcane fields, green hills around, a small fishing port and a lot of historical assets are there.

Townspeople promote their agricultural products, and “Karabezi” is their original farm brand derived from Japanese pronunciation of “colorful vegetables.” Okinawan farm products are specialties that differ from other prefectures, and colorful is one of the key descriptions; pink mango or guava, red dragon fruit, green okra, green pepper or leafy vegetables, purple sweet potato, orange pumpkin, and yellow banana. Nearly every grower creates original sweets or fresh dishes made by their original farm products.

It’s a small town, and because of that, the populace can support each other, creating good relations and new projects as well. They hold morning bazaars every Saturday from 8 a.m. to noon on the Yaese Town Hall parking lot in Gushichan district, where people can buy fresh Yaese vegetables.

Yaese is not only famous for its vegetables, but also for its historical significance. Of special interest is the Minatogawa fissure valley that Seiho Oyama discovered in 1969 along with the remains of Minatogawa people who are believed to have lived in this area about 18,000 years ago. 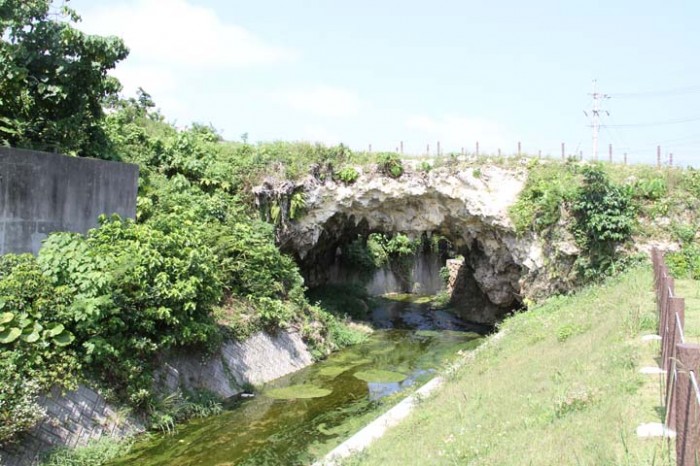 A naturally formed limestone bridge was an important part of a major road during the Ryukyu Kingdom era.

There is also a natural bridge called “Hananda”, an interesting spot in Yaese Town. Nature only created this bridge and it is very beautiful.

Minatogawa is also famous for its fishing district and is famous for its Haarii races. The fishing port holds a Haarii festival every year, and many people gather to see the races. The Shisa in the Tomori district is also something visitors should see. It’s the oldest and biggest Shisa on Okinawa, and it has many bullet holes from World War II.

Also, Noboru Jahana, a very famous Okinawan hero is from Kochinda district in Yaese Town. He was one of the first five people from Okinawa to have the local government to fund his education in Tokyo. More information on his life is at http://en.wikipedia.org/wiki/Jahana_Noboru. 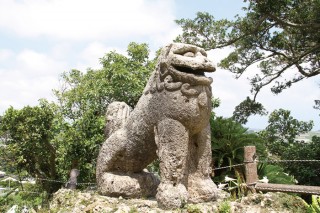 The giant stone shisa of Tomori is sitting on the top of Jiri Castle ruins in the Tomori district of Yaese Town. It’s said that it’s the biggest and oldest village-owned stone shisa on Okinawa. It was erected in 1689 on Yaese Hill as a protector against fire. Facing the hill, it’s 141.2cm, tall and 175.8cm long. Yaese was the site of some of the fiercest fighting during the World War II, and the shisa has plenty of bullet holes on its body to prove it. 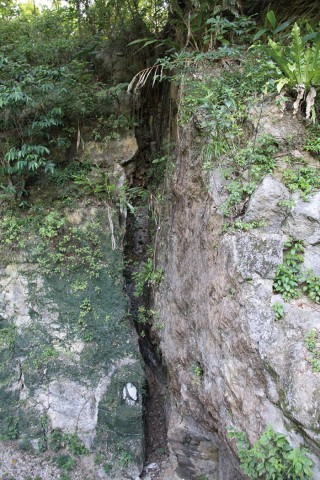 The Minatogawa Fissure Ruin is a valley that was created when an underground cave with a river flowing through it collapsed. It’s located at the Nagamou district in Yaese Town just next to Yuuhi River. Seiho Oyama discovered the site in 1968. Skeletons of so called Minatogawa people, who lived in the area about 18,000 years ago, were also discovered in the valley. The skeletons were in very good condition even though they were from such an ancient era, and they have yielded very high value information to researchers of that era in Japan. 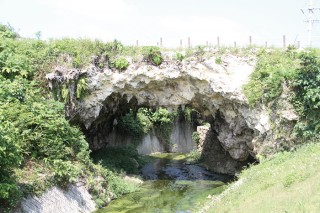 Hanandaa is a natural bridge that a streaming river created over a very, very long period of time by shaving a huge limestone rock year after year until it eventually formed into a bridge. People have used the bridge since ancient times, and the road that includes the bridge was one of the most important access roads in the Ryukyu Kingdom. The bridge is 29m long and about 10m high, and people can still walk across the bridge today. 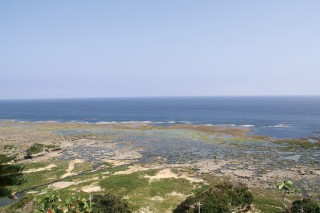 The Gushichan Castle Ruins Park, which is also called the Battle Site Park because the area was a scene of a hard-fought battle during the war, is located on the ocean coast of Yaese Town. A memorial monument was built there very soon after the war, and the area became known as the Battle Site Park. The castle that once stood on the site was built sometime in the 13th~15th century but historians have not yet been able to confirm who built the castle. A visitor to the park can enjoy a great panoramic view the Pacific Ocean and a superb landscape. 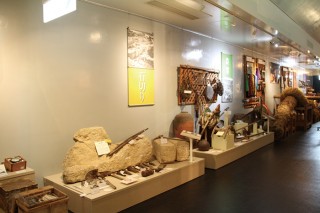 Gushikami Museum of History and Folklore

Gushikami Museum of History and Folklore is located in the Gushikami district of Yaese Town. The facility displays life-size figures of Minatogawa people, whose remains were discovered in the Minatogawa fissure area, and who are estimated to have lived 18,000 years ago. The museum also introduces specialties of each district of Yaese Town, and displays everyday life tools and scenes from ancient times through our age. The museum is open 9:00 – 17:00 every day except Mondays. Entry is ¥200 for adults and ¥100 for children under 18 years of age. Children under 6 are free. 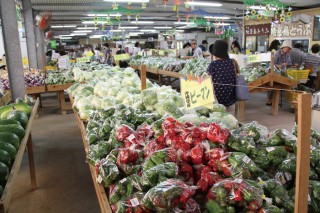 Aguri House Kochinda is a farmers’ market located at the Kochinda district in Yaese Town, but not organized by JA. The market sells not only fresh and reasonably priced farm produce like vegetables and fruit but also meat and fish. Most products sold in the Aguri House come from local farmers, and although not necessarily selected for their looks and beautiful shape, they are very, very fresh and reasonably priced. Fresh eggs are also available very reasonably because the chicken farm is located just next to the facility. Every day crowded with customers from locals to mainlanders wanting to get the freshest produce on the island, the Aguri House Kochinda is open 9:00 – 19:00 every day except for New Year holidays and Bon Festival holidays in the summer. 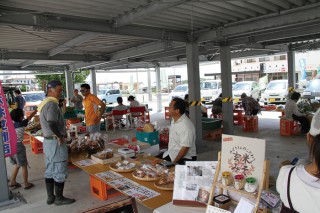 Every Saturday morning, there is a morning market on the Yaese Town Hall parking lot. It’s not a very big market but very fresh farm produce and processed products by local producers are sold. Yaese Town is famous for fresh and colorful vegetables, and one can get them from their original producers at the market. The sellers are mostly senior citizens chatting with each other and very friendly to customers. Two of the most famous products of Yaese are green peppers and sweet potatoes. Everyone should taste some, and feel the spirit of Yaese Town! 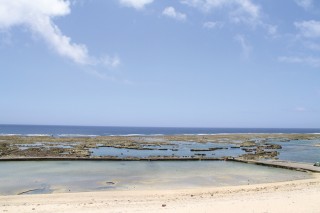 Hanashiro Beach is located in the Hanashiro district of Yaese Town, downhill from the Southern Links Golf Course. It’s a very calm beach, and visitors basically consist of locals enjoying a day on the beach. It’s not a resort nor gorgeously landscaped, but very relaxing and quiet. So please leave noise and rowdy friends behind when you visit the beach. Its specialty is a man-made pool by the shoreline. It’s very shallow and since there are no waves in the pool, it’s safe for kids to play. There are colorful fish in the pool to watch, too. There are no showers or toilet facilities on the beach.