This week, I would like to introduce Bruce Gagnon. a Vietnam-era veteran who began his grassroots organizing career by working for the United Farm Workers Union in Florida organizing fruit pickers. He is an active member of Veterans for Peace (VFP). This week’s column is based on his blog: “Organizing Notes” In his latest post, he comments about the VFP Letter to Gov. Takeshi Onaga presented on May 31st and his rebuttal to Robert Eldridge’s (recently dismissed former political affairs and public diplomacy officer, Marine Corps Installations Pacific on Okinawa) recent story in the Washington Times critical of Gov. Onaga’s agenda.

For the full blog please go to: http://space4peace.blogspot.jp/2015/06/fighting-to-save-nature-and-culture.html

The following is based on Gagnon’s “Organizing Notes”:

On Sunday, I joined several members of Veterans for Peace (VFP) to deliver a letter to officials from the Okinawan Government that was addressed directly to Governor Takeshi Onaga. The letter gave strong support to the island people in their long struggle to rid their homeland of US military bases.

VFP national board member Tarak Kauff (New York) read the letter that concluded with a pledge to build national and international support for Okinawa and declared that, if invited, the organization wished to send a strong delegation of its members to the island to stand with the people.

JU readers can find the “VFP Letter to Gov. Onaga” at 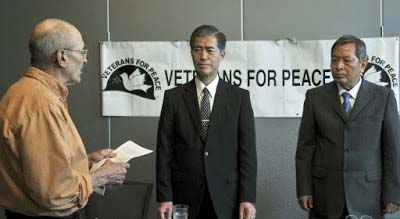 Immediately after Tarak Kauff (VFP National Board of Directors) had finished reading the letter, Director General of the Governor’s Executive Office, Masaru Machida said, “You have our invitation.  Please come and see for yourselves.” The Okinawa Delegation will be returning June. A video of the meeting is on YouTube at https://youtu.be/Z2z_4hui6MM.

In the fall VFP will indeed lead a delegation to Okinawa and will go to Jeju Island in South Korea as well. These twin-campaigns for peace and environmental sanity represent the most visible Asia-Pacific island struggles that are similarly being waged in Hawaii, Guam, the Philippines and beyond as the US moves to consolidate control of the region on behalf of corporate interests.

There is much talk about whether the Okinawan delegation to D.C. will be successful in changing US policy. Considering that Obama won’t even answer letters from elected officials on Okinawa does not give one much confidence that US policy is likely to change anytime soon.

But don’t be fooled by inside-Washington baseball. The real change is taking place in the hearts of people on Okinawa, in Japan, and throughout the world. The images of building a runway for the US Marines that will extend out into pristine Oura Bay where coral and endangered sea mammals are being threatened reveal a manifest injustice. Already large concrete blocks have been dropped into the bay at 75 sites (for runway construction) and as a result 94 colonies of coral have been destroyed.

Mr. Kauff concluded the letter to the Okinawan people by reading:

“We promise to carry your message to members of Congress, the administration, our international Veterans For Peace membership and to every corner of our land. In fact, this summer at our annual convention in San Diego, California, the theme will be “Peace and Reconciliation in the Pacific,” so we are already working to bring awareness about the region to our members and beyond.

“The cry of the people of Okinawa must ring loudly all across America—and we will do our part to make the voices of the Okinawan people heard.”

Following the presentation of the letter everyone moved to a nearby restaurant where about 60 people gathered to have dinner with Gov. Onaga and the delegation of other elected officials from Okinawa. Many of those attending the dinner were Okinawan-Americans, women who had married former American GI’s or other US officials that were once stationed on the island. The dinner was hosted by Okinawa Goodwill Ambassador in Washington D.C. Ms. Mayumi Folta. The dinner included a Karate demonstration by Uechi Ryu Academy of World Champion Nestor Folta. The reception was not affiliated with the Okinawa Kenjin-kai of Washington.

The last word from EHS: Prime Minister Abe’s address to the US Congress was titled “Towards an Alliance of Hope”. Hate Speech, discrimination and Okinawa need to be resolved before Japan can join with the “Free Nations of the World”. “Peace starts at home.” Gregg Primo Ventello’s story in the Japan Times gives a great overview, with a historical point of interest.