Locked On! Cage Impact! fighters to face off Sunday 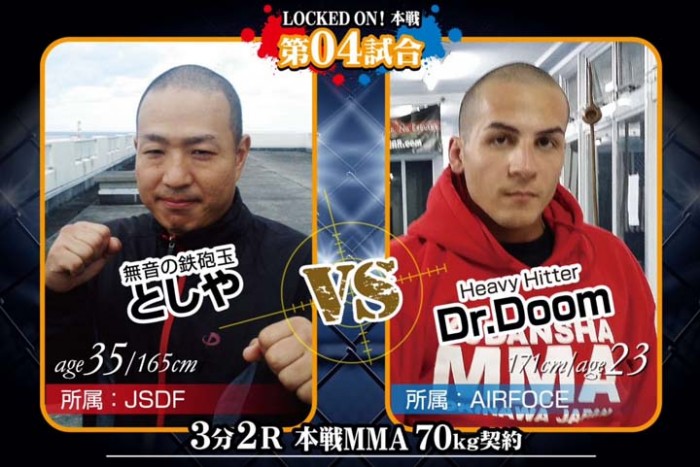 Fighting matches that began in Okinawa as ‘The Outsider’ matches aimed at attracting delinquent youth to organized sports in order to bring order and discipline to their lives have evolved into Locked On Cage contests that are attracting and ever growing crowd of enthusiasts, including foreign residents of the island.

The matches are fought according to standard Mixed Martial Arts rules but in a seven-meter-wide hexagonal cage instead of a standard ring.

The next “Locked On! Cage Impact!” tournament is scheduled to take place at Namura Hall in Matsuyama, Naha City on Sunday, June 28th. The doors open at 13:00 and the matches start at 14:00.

More American fighters than ever are scheduled to take part this time in the tournament that is the first in the series culminating in the finals to be held in December. The overall winner of the series will win the Champion Belt plus a ¥100,000 purse.

Among the American fighters, Dr. Doom, an active duty Air Force serviceman taking part for the tournament for the fourth time fights Toshiya, a member of the Japan Self Defense Force.

Other Americans include Edward, a marine facing Shinya of Team Takashi. Yudansha BJJ fighter Pearce, a 22-year-old airman is set to meet “I Want a Fight” Von, a 27-year-old Marine, and finally, a 19-year-old Marine who goes in the ring by the name “The Tool” will face Jared Bland, a 27-year-old member of the U.S. Air Force.