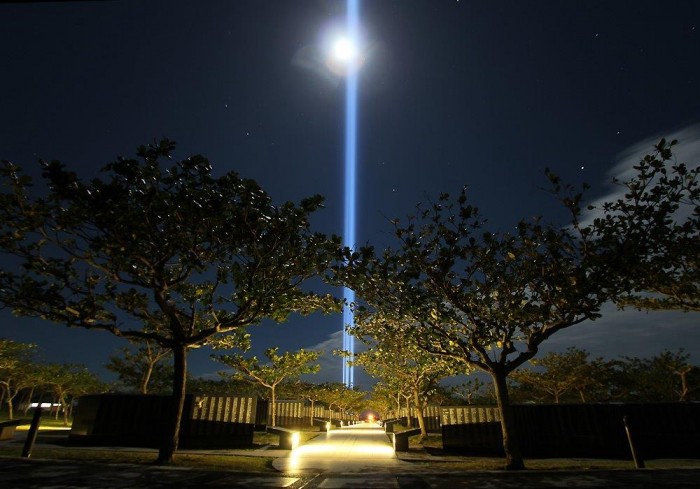 Pillars of light shoot up to the sky from Peace Memorial Park in Mabuni.

Vintage World War II searchlights will create a “Peace Tower Triangle” over the skies of Okinawa as an event related to the 70th anniversary of the end of the Battle on Okinawa.

The main event is the annual Memorial Ceremony for All the War Dead is on June 23rd, also known as “Irei-no-Hi,”at the Peace Memorial Park at Mabuni, Itoman City. The day marks the end of fighting in the Battle of Okinawa on June 23rd in 1945.

The searchlights will be lit from 20:00 to 22:00 on both June 22nd and 23rd. The lights will form a huge triangle of three lights towering beyond the cities. In the course of the year, the light towers stand up from three points, the first being Zamami Island on Mar. 26th that was the first place in Okinawa Prefecture where the U.S. troops landed on March 26th, 1945. In Yomitan Village the lights shoot up on Apr. 1st as it was the first place on the main island of Okinawa for the U.S. forces to set foot on the ground on Apr. 1st, 1945, and the third place of the triangle is the Peace Memorial Park where the battle ended on June 23rd, 1945. The lights will send a message of peace from Zamami and Yomitan to Mabuni, Itoman City, urging people not to forget the war experience and promoting the importance of peace.

In addition to the light tower triangle, a live music event will take place at Mabuni, and a ceremony with people floating paper lanterns that have peace messages on them on a pond in front of the Cornerstone of Peace monument.  Some 7,000 candles are expected to be lit up on the 22nd starting from the entrance to the Cornerstone of Peace at the park.

There’s also an eco candlemaking workshop for those who want to make their candles themselves.

The event takes place in the night of June 22nd and 23rd at the Peace Memorial Park at 444, Mabuni, Itoman City. Admission to the event is free