From the Midwest International Energy Symposium in Iowa (Oct.2014) http://midwestenergy.wix.com/mwenergysymposium#!keynote/ to the Vatican and the Asia-Pacific, key people have been discussing how best to chart a course towards sustainable energy. His Holiness takes it a step further today, Thursday, June 18th, with the release of an Encyclical on the moral imperative for sustainable development, and action to protect the world’s poorest and most vulnerable to climate change. 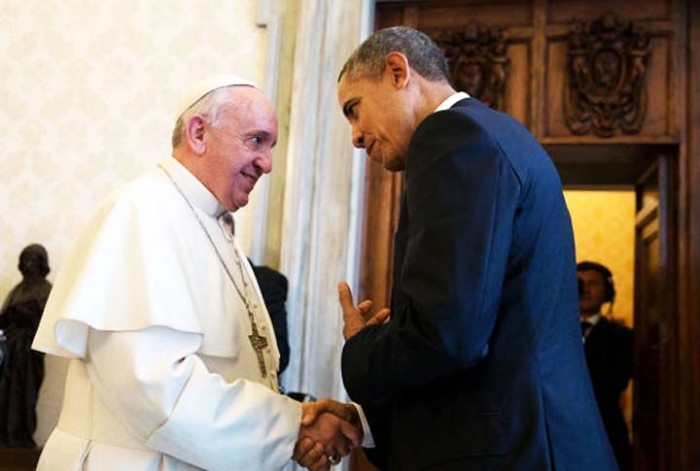 For us in the Asia-Pacific as China and Japan landfill the oceans for military elbowing, renewable energy might well lead to new diplomatic initiatives.  May the Olympics in Tokyo mark the beginning of a shift towards sustainability.  Renewable energy leads to peace and stability in the region.  Before China’s bubble bursts, it’s time to “go green” with Blue Economies in mind.

In this rare open letter that will shape the Catholic teaching, His Holiness Pope Francis, lays out our moral imperative to “care for our common home” and end the inequalities which are driving interlinked problems like climate change and poverty.

The Encyclical titled “Laudato Sii” (Praise be to you) can be found at http://www.papalencyclicals.net/Franc/index.htm

His Encyclical is welcomed by Catholics and non-Catholics all over the world, including in the form of a big celebratory march in Rome on June 28th, various pilgrimages (including the People’s Pilgrimage launched by Yeb Sano on June 7th and various European pilgrimages) towards Paris to coincide with COP21, and also interfaith vigils and prayer meetings throughout 2015, and especially in September when the Pope speaks to U.S. Congress and the UNGA. A Global Catholic Climate Movement (GCCM) petition (endorsed by the Pope) for a 1.5C-degree target has also attracted widespread support.

The Pope is the latest and highest profile voice to join a long list of people, from scientists, business leaders, economists, labor leaders and youth, who understand that taking action on climate change and empowering poorer countries to develop sustainably is both morally and economically right. The fossil fuel industry is increasingly the sole and isolated voice opposing the groundswell of momentum for action.

The Pope’s call provides a massive boost to two big summits happening this year on sustainable development and climate change. Politicians have a chance to listen to their people and deliver plans to move towards a poverty-free world powered by 100% renewable energy at the UN General Assembly on the Sustainable Development Goals in September (the Pope will be speaking at the UNGA and to the US Congress) and COP21 in December.

The Pope will call on people around the world to help the poor and vulnerable, who are worst hit by our neglect of the planet and to consider making changes in our lives to ease the pressure on the planet.

The hashtag which seems to be used most to amplify this moment is popeforplanet, although other hashtags are being used (see call notes).

The Africa Progress Panel report – written by Africans for Africa – was released last week. It called on Africa to play a leading role in the global clean energy transition and argued that the continent must tap its huge clean energy potential to alleviate energy poverty.

NOTE: Thanks to Christian Teriete at TCKT for the updates.

“When man thinks only of himself … permits himself to be captivated by the idols of dominion and power … Then the door opens to violence, indifference and conflict.” Pope Francis.

Born in Buenos Aires, Argentina, on December 17, 1936, Jorge Mario Bergoglio became Pope Francis on March 13, 2013, when he was named the 266th pope of the Roman Catholic Church. Bergoglio, the first pope from the Americas, reportedly took his papal title after St. Francis of Assisi of Italy.