Search for “The Little Girl” is renewed

This week, the search for Ray Gillespie’s “The Little Girl” has been renewed. Gillespie, a U.S. Marine from Toledo, Ohio, was a USMC 6th Division Veteran of the Battle of Okinawa, wounded in the stomach by machine-gun fire. He passed away 17 years ago today, June 25th, of cancer. 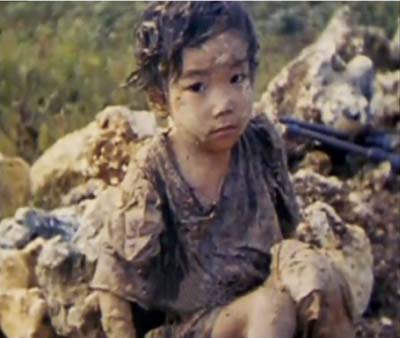 A little girl found wandering on an Okinawa battle field during the war. Photo from a document shot during the battle. The girl in the picture is not the person the poem refers to.

“He spent much of the last year of his life trying to find a little girl who haunted him. He contacted Japanese, Okinawans, and Americans, but died without any answers.” (2007 Stay off the Skyline).

According to worldcat.org, “The 6th Marine Division holds a unique place in U.S. Marine Corps history, because it was retired after one great battle. The division was formed on Guadalcanal in September 1944, its ranks filled with battle-hardened veterans and untested replacement troops. The Sixth Division fought its only action on the island of Okinawa from April to June 1945 but entered the fight with more combat experience overall than any other unit taking part in the battle on the island,”

Ray Gillespie contacted me in 1998, and talked about Okinawa and Vietnam.

He left us this poem.  With today’s improved database about the “Battle of Okinawa”, along with a new “Okinawa Working Group” formed by interested veterans, we are confident that “The Little Girl’s” whereabouts will be found.

Showing death along with man’s fear.

Okinawa in the year Forty Five

The firefight was short and swift.

Taking place in a stream below a cliff.

As I ordered firing to cease and subside.

A higher-ranking Sergeant took no heed

Of my order to leave the little girl be.

His first round missed, going astray.

His second shot tore her intestines away.

My complaint to the Lieutenant in command

Brought a tart reply and a sharp reprimand.

The platoon moved on; she was in my care.

Her chances were slim, no better than fair.

On a path toward a road lying west,

I carried the child being gentle as best

While very high on a hill to my right,

someone followed, well out of sight.

Was it the enemy? Did compassion restrain

A warrior from putting lead in my brain?

Or were they parents or relatives above

Following in fear, but driven by love.

As I repeated, “You’re all right dear.”

My language she could not understand,

But near the road she touched my hand.

She was taken to a hospital down on the bay

Two of my friends died the next day.

Lieutenant, he lost his sight. And that Sergeant.

He caught a bullet that night.