When Okinawa was not so peaceful; Koza Riots 1970

Burned and overturned cars in Koza, current Okinawa City, in the aftermath of the riots.

Recently, you may have heard some of the ‘anti-base’ rhetoric that has made its way through Okinawa as people of this island stage peaceful rallies and protests against the new runway being built in Heneko, attached to Camp Schwab.  It is important to remember that it was not so long ago that there was a time when tension between the locals and the American military grew so strong, that the calm protests finally erupted into riots that literally, changed the face and the name of Okinawa. 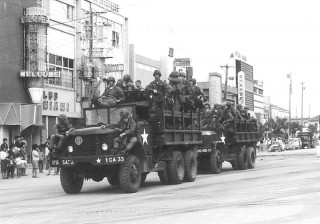 U.S. military on patrol in Koza after the riots.

Okinawa has not always been Okinawa. Up to 1972, U.S. authorities controlled the Okinawa Prefecture as it eventually grew into a valuable staging post for American troops preparing to head off to war in Vietnam.  At that time, Okinawa’s civilian police had no jurisdiction over American citizens so the responsibility to keep peace and order was that of the MPs (Military Police). The Military Police were regularly busy in their policing duties as much of their responsibilities entailed patrolling the bar districts, pacifying drunken soldiers, and attempting to defuse any trouble that they may have encountered as they made their patrols.

One of the most common problems had become traffic accidents in which Americans were involved. On the night of Dec. 20th, 1970 a drunk American service member driving his car had hit an Okinawan man. The man was later resting in the back of an ambulance, with minor injuries, when a swarm of angry onlookers started gathering. The angry mob began harassing an uninvolved American service member and his girlfriend as they were walking near the scene of the accident. The MP’s were able to quickly rescue the couple and put them into the safety of their patrol car.  When this happened, some of the Okinawan crowd surrounded the vehicle and began to rock it back and forth.  The MPs called in for back up at this time as they were preparing for the high possibility that this was quickly escalating into an emergency situation. 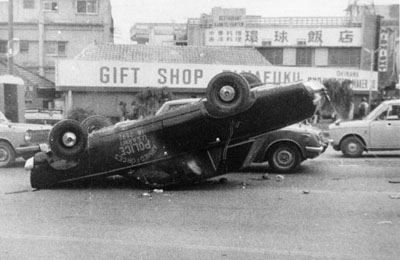 `Eventually, the patrol car was able to leave the situation to return the service member and his girlfriend to safety, away from the scene.  Soon after, the MP vehicle returned to the scene to find yet another American service member involved in a traffic accident. The mob of onlookers from the initial accident had become absolutely infuriated. This was apparently the ‘straw that broke the camels’ back.’  The mob had surrounded the vehicle involved in the second accident and some of the crowd were attempting to drag the American driver out of the car.  Again, the MPs had to act quickly to defuse this increasingly volatile situation.

The patrol cars became swarmed and blocked in by the angry mob of people.  The riot began to escalate as the numbers of people who were gathering at the scene were now in the hundreds.  Rioters began pushing American-owned vehicles (identifiable by their yellow-numbered plates) out of the parking lots and into the middle of the street where they then set them ablaze. Car after car was set ablaze as the rioting crowd catapulted bricks at the MPs who had been dispatched to help control the situation. The rioters were soon able to overtake the MP’s and storm through the gates of Kadena Air Base where they set fire to the buildings within.  It wasn’t until 6 a.m. the following day that the riot had finally settled down.  By this time, a total of 80 cars had been burned, and 60 Americans were injured during the incident. 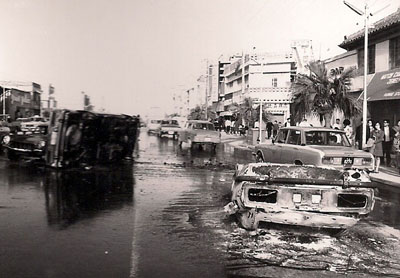 Gate 2 Street in the morning after the riot.

The Koza Riot was a result of a large amount of anger that had been bottled up throughout years of atrocities and injustices endured by the Okinawa people. Through these years, crimes such as rape or burglary that had been committed by American service members on Okinawa were rarely tried and even more rarely did they find that justice was served.  As the number of these incidents had become more and more common, they became the fuel for the growing discontent of the Okinawan people against the American service members.

Nonetheless, something positive did result from this terrible incident.  The American military were able to pinpoint the faults in their system that had led to this contained discontent.  They were then able to build a more foolproof system to ensure that a healthy, peaceful relationship was maintained with the people of Okinawa.

Fortunately, the Koza Riots have been left behind as a dark page in the history books.  But the lessons learned and the procedures established to assure that history does not repeat itself are a constant reminder of how injustices can only be endured for so long before they literally ignite into destructive rage. Keeping this in mind, let us all make the effort to maintain harmony by assuring that we drive a little more slowly and carefully, keeping our eyes on the road and away from our phones or other distractions while driving.  As welcomed guests on Okinawa soil, it is our duty to reciprocate the courtesy as we would never want to be responsible for the type of pain or injury that could ignite the next peaceful demonstration into an ‘Okinawa Riot.’