Kachashi dance contest starting 5 p.m. is the highlight of Sunday’s activities at the festival.

Hagoromo Festival in Ginowan is one of the largest summer festivals on Okinawa regularly attracting more than 100,000 visitors during its two days over the weekend, this year Aug. 8th (Sat) and 9th (Sun). The festival venue is the Ginowan Seaside Park next to Okinawa Convention Center and adjacent streets. 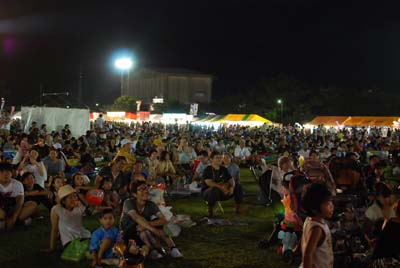 Although typhoon Soudelor should be well past Okinawa by the weekend, festival organizers say that in case of inclement weather the festival will be postponed to next weekend, Aug. 15th and 16th.

On the first day, the festival opening ceremony is held at 3:30 p.m. followed by Children’s Eisa at 4:15. A parade honoring the life and achievements of King Satto takes place on Kankai Gate and Convention Streets in front of the Seaside Park starting 5:15 p.m. with hundreds of people dressed in ancient Ryukyu attires. The parade includes King Satto and the famous Hagoromo angel, accompanied by hatagashira groups and Ginowan Junior Chamber of Commerce Eisa dancers. The theme of the parade is the “Walking Picture Scroll of King Satto,” who, according to the legend, was the son of a farmer and a heavenly maiden of the Legend of Hagoromo. 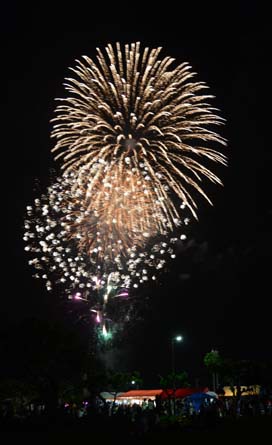 The legend of Hagoromo is actually known in mainland Japan and many places around the world in different variations. In its Okinawan version, the story tells of a man walking near a river, who came upon a beautiful robe he’d never seen before, took it home and placed it in a storage room. Returning to the river, he spotted a beautiful heavenly maiden bathing. As she finished, she found her robe gone, and that meant that she could not return home to the heavens.

The man stepped forward, and talking to her gently invited her to his home. The two later married and had two children, a boy and a girl. As the children were growing up, the maiden heard the older child sing a lullaby to her brother. The song was about the robe kept in storage. Although the woman was living a happy life, she couldn’t resist the temptation of getting her robe back, found it, put it on, and immediately had to go back to the heavens, leaving her husband and children.

The son of the couple grew up to become the powerful Ryukyuan King Satto, who’s the central figure of the parade. 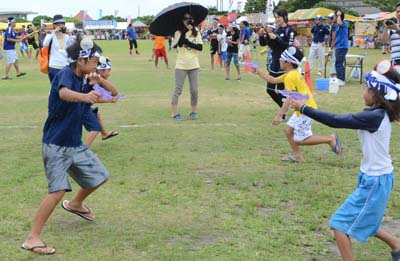 The second day starts at noon with a water gun contest. Kachashi Dance Tournament that starts at 5 p.m. is the highlight of the second day. Anyone can take part in the contest, and both participants and spectators are guaranteed to have a truly good time. More than 70 individuals and groups showed their original dance last year, including men and women of all ages who delighted the crowds with their antics.

Fireworks will close the event both days starting 8:50 p.m., and especially the last day of the event promises to be spectacular when 1,000 fireworks are launched.

As parking is limited in the area, organizers urge visitors to use public transportation.