Short history of traffic lanes and money on Okinawa 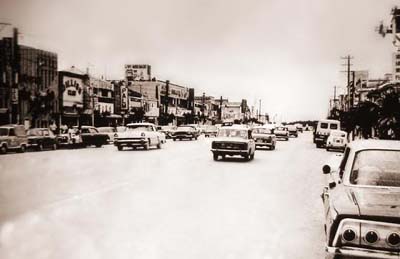 During the years after the war, Okinawa was driving on the right like in his picture of Gate 2 Street in the early 60’s.

Before WWII in Okinawa, everyone drove in the left lane of the road. During the Edo Period (1603-1867), the Samurai had typically drawn their swords with their right-hand to fight so they needed to be sure that this hand was free to do so. But then for some reason, they switched to the right lane. Then they switched back to the left.

It wasn’t until 1872 that the first written rules for driving where actually implemented. This decision was made based on the results of which country won the bid for the development of the national railroad system. Three competing countries, America, France and Britain went head-to-to-head-to-head in a bid to sell their railroad building technology to Japan. The big winner was Britain, which laid the foundation for the future of which side of the road people would have to drive. In Britain’s past, most everyone traveled on the left as it made the most sense in violent feudal societies when a swordsman, similar to the Samurai, most likely right-handed, needed to be at the ready to draw his weapon. 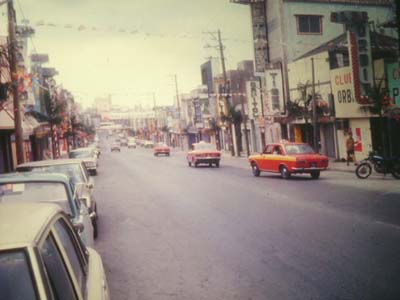 Traffic on the right continued all the way to 1978 when the traffic was again switched to the left like elsewhere in Japan.

After WWII and the defeat of Japan, Okinawa fell under control of the United States. Most of the infrastructure, such as roads and highways, had been destroyed or were in very poor condition because of the battles. The presence of the American military, who drove on the right, led to the implementation of American rules such as driving on the right. During this time, most of the vehicles driving around were associated with the American military, so this was more intuitive for them and from that point forward, driving in Okinawa became a right-hand side affair. 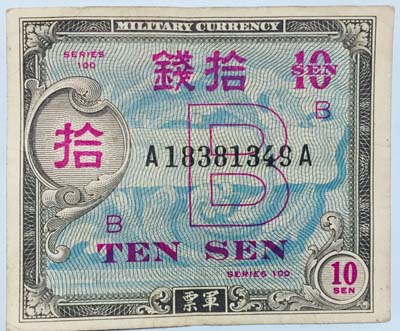 So called B-yen was the official money on Okinawa from 1945 until 1958, when U.S. dollars became the only official currency on the island.

After the war, the yen currency was not available. For a time, there was no currency, and people relied on the barter for distribution of supplies that came from the authorities. In 1945, a new currency called the ‘B-yen’ was established as the only legal tender. It was a military currency issued through the Ryukyu central bank. Once the Okinawa economy was considered stable enough, the B-yen was phased out and the US dollar was brought into use.

On Sep. 16th,1958, the B-yen was done away and could be traded in at the rate of 120 B-yen for every 1 dollar. (Note: Not too much different to the yen and dollar exchange rates today). At this time, the yen was being used on the mainland at a rate of ¥320 to 1 USD. Professor Michiko Iha of the University of the Ryukyus has argued that the B-yen was part of a scheme by the occupying authorities to keep the dollar strong and the yen weak. This enabled them to construct and maintain military bases at a much lower cost.

In 1971, a formal agreement was reached between the US and Japan that led to the control of Okinawa returning to Japan in 1972. With this the implementation of structures consistent with Japanese mainland laws began. The currency switched from the US dollar back to the yen in all parts of Japan.   By 1978, all of Okinawa had switched from driving on the right side to the left side of road. This much anticipated and dreaded switch for Okinawa Drivers began like a bit of a runaway circus. Tourists, photographers and onlookers stood tirelessly through the night to bear witness to experience front row viewing of what they understood to be history in the making. Sachiko Miyagi, a 64-year-old Nanjo city resident reminisces about that time. She said, “At first, everyone was not used to driving the new direction and there were so many traffic accidents until people could get adjusted to driving on the opposite side.”

Today, I can only imagine the driving accidents that would have occurred during such a large-scale switch. I have often cringed to watch as newbie US service members drive into the opposite lane as they head out of the Legion Gate of Camp Foster. Nowadays, driving in the left lane and the usage of yen everywhere is completely normal. To recollect how our ‘normal’ came to be during a different time this island helps us understand the flexibility of the Okinawan people through the years of innumerable changes, and paints a clearer picture of what life on Okinawa used to be like, not so long ago.