Ghosts, goblins and tricksters are in season again 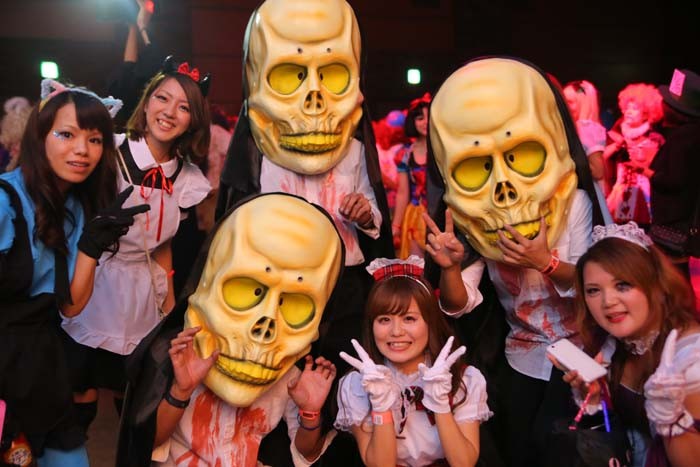 Halloween parties welcome revelers of every age as the Japanese are discovering Halloween like never before.

Halloween has a long tradition in the U.S. and western European countries where it’s a time for playing pranks and tricks, conjuring up witches, goblins and haunted houses, and of course, trick-or-treating kids looking for candy.

By tradition, Halloween is to different folks exactly what they’ve been taught since childhood with plenty of myths, beliefs and even superstitions.

Halloween has been known since 1745 when it was first mentioned to be celebrated in Scotland as a Christian event. It’s traditionally celebrated on Oct. 31st, the eve of the western Christian feast of All Hallows’ Day.

Halloween the gradually evolved into many activities beginning with the church services and lighting candles on graves to pay homage to the dead, and on to dozens of more exciting things like guising, or trick or treating, dressing up in costumes for parties, finding creative ways to transform pumpkins into works of art, designing and going to haunted houses, playing tricks on people, and of course, gathering copious amounts of candy. 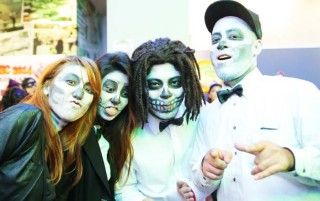 Ghoulish faces are everywhere this Saturday. You could run into these fellas at Pumpkin Panic party at Koza Music Town.

Those customs began in Celtic countries, many from pagan origins that have been talked and passed on to people around the world. Many peoples all the way to the Romans claim credit for the Halloween, but all agree that prayers for the harvest and abundance were the basic reason for the festivals and prayers.

Trick-or-treating stems from practices dating back to the 16th century where people in costumes or disguises went house-to-house uttering songs or reciting verses in exchange for food.

Through the years, praying for the dead was a primary part of the All Hallows’ Day’s activities, with many people dressing up and burning candles to guide the dead back to visit early homes. Similar customs exist today in Europe and other parts of the world, including Obon here in Okinawa.

The New York Halloween Parade was instituted in 1974, and from there, making a buck off Halloween began in earnest. Witches, headstones, ghosts and skeletons became popular, as well as scary haunted houses.

Halloween enthusiasts have a love affair going with the pumpkin, although the original veggie for carving in Ireland and Scotland was the turnip. In North America, the pumpkin was deemed easier to carve, and thus more fun, and from 1837 has been a large part of the celebration. Scarecrows, cornhusks and other autumn symbols have cropped up, with black and orange somehow becoming the traditional Halloween colors.

The Halloween costumes are everything from ghosts and gremlins to vampires and devils, but watching Japanese TV this year, the local trend seems to be more towards Star Wars and characters from popular comic books. But whatever the individual preference, everyone seems to welcome another good reason to have some fun.