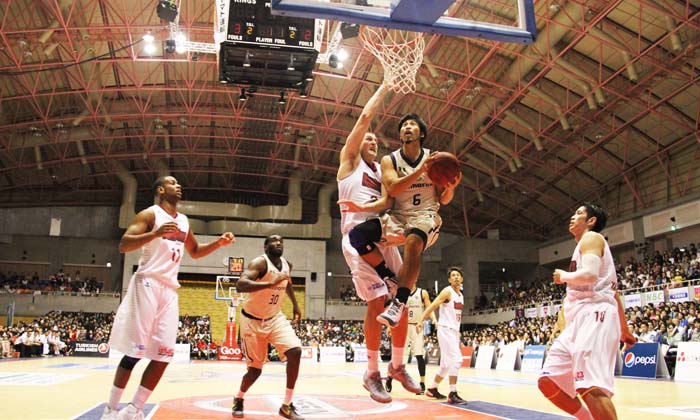 Guard #6 Shigeyuki Kinjo was the top scorer of the Kings on Saturday.

To the delight of their fans, the Ryukyu Golden Kings delivered a pair of wins in their first home games of the regular season 2015-16. The Saturday score against Bambitious Nara was 85-70 for the Kings, while the Sunday numbers were 75-64. 3,293 fans came to see the game at Okinawa City Gym on Saturday and 3,074 on Sunday. 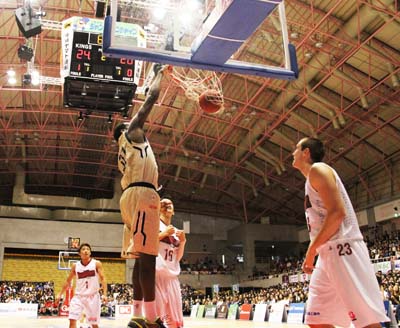 Evan Ravenel dunks one of his 12 points.

On Saturday, the Kings win was never in doubt. The team had a 10-point lead after the first quarter, but in the second, Nara managed to cut the home squad’s lead down to four. At that point, King’s boss Tsutomu Isa called a timeout, had a prep talk with his team, and hearing the message Ryuichi Kishimoto and Draelon Burns extended the King’s lead with three-point shots each. Nara tried hard in the last two quarters, but to no avail, as Kinjo, Ravenel and Yamauchi kept shooting back.

After the game, King’s Head Coach Tsutomu Isa was happy with his team. “I’m satisfied with the win today because we could make audience happy. Although we made some small errors, we could do what we wanted for 40 minutes. Today’s game was better than the last week’s game with Shiga, but we would like to up the tempo tomorrow,” Isa said.

Bambitious Head Coach Kohei Goto admitted that his team was no match to the Kings. “The Kings were fast to switch between offense and defense, and we could not catch up with that. We cannot win tomorrow without doing something with Kings’ Japanese players and Burns.” Koto mused. 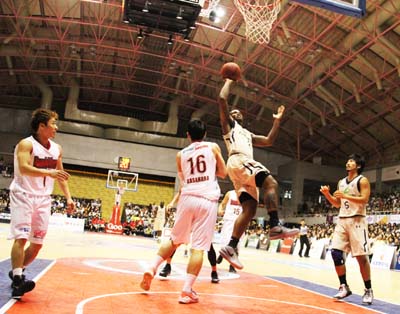 Draelon Burns shot 15 points and had five assists on Saturday.

Koto’s musings did not help. On Sunday, forward Shuhei Kitagawa and Anthony McHenry scored 15 and 11 points respectively while Draelon Burns, Ryuichi Kishimoto and Evan Ravenel all poured in 10 points.

However, it did not look so easy for the Kings in the beginning. The Kings’ shots could not find the hoop nor gain an edge on Nara, but luckily the team did not allow Nara to get points. In addition, the Kings made six turnover mistakes in the first quarter alone, and the bad vibes for the team continued through the second quarter with the team barely able to keep its lead.

In the third quarter the Kings’ defense came back into existence, and that allowed the team finally to extend the lead. The same continued through the fourth quarter as the team managed to throw off Nara’s attacks.

After the game, Isa admitted that his team had had its struggles but had his mind already in the future matches. “We felt relieved after we managed to extend our lead once we noticed that our opponents were getting tired. After the next week, we are going to face strong teams like Osaka and Shimane, so we will have work to do,” he said.

Bambitious’ Goto admitted that his team made mistakes. “We tried to slow down the Kings’ quick switchover of their offense and defense, and we could actually curb Kings’ transitions. However our mistakes energized them. We regret to having lost the game, but also learned a lot today,” he concluded.