According to the 0ct. 2 NNN Prensa Latina, and posted by Anthony Brenner on The Cuban Handshake blog, ” Guantanamo will host a meeting of the World Council for Peace and the 4th International Peace Seminar for the Abolition of Foreign Military Bases from Nov. 20 to the 25th,” said Jose Francisco Sierra, member of the peace movement in Cuba. http://thecubanhandshake.org/cuba-guantanamo-to-become-world-city-of-peace/ Will Okinawa be represented? Will the US attend? 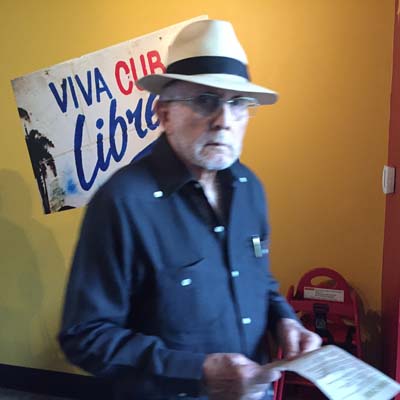 Many older Cuban expats are suspicious of the opening of U.S. – Cuba ties, while many younger ones welcome the move.

The Cuban experience is of interest as Cuba’s constitution of 1903 was first drafted by the U.S.A. after its victory over Spain in the Spanish-American War of 1898. (The Ryukyu Kingdom was questionably annexed by Japan in 1879.) The Platt Amendment of 1901 is worth further study as it might have a historic parallel with Japan’s present reality. Japanese leaders are lobbying to have Japan have a seat at the UN Security Council. My question is: Can a nation be considered “sovereign” when a treaty with a foreign country overrides or supersedes the constitution of the people of that nation? Can Japan become a member as an “enemy state”? I was wondering about this while smoking a Cohiba at “Finca Vigia” (Lookout House) on Kokusai St. That was the name of Hemingway’s house in Cuba.

Globalresearch.ca 6/23/15 Dr. Christof Lehmann, reported: “The UN Charter still designates Italy, Germany and Japan as enemy states to the United Nations.” In legal terms this means that any U.N. member state can launch a “preemptive” military aggression against these nations without a declaration of war. He further reports that “Seldom discussed, this enemy State status today is, arguably, one of the greatest obstacles for a lasting peace in Asia and in Europe.”

Reconciliation is the key.  The world’s leaders today need to raise the standards of action towards getting our planet back on the path to resilience. The obstacles in the way of creating a more just world starts at home. “Peace at home, Peace Abroad”.

I pray that the Sustainable Development Goals will be exponentially implemented.

As many celebrate, others are wary of this new chapter in Cuba – U.S. relations. With blessings from H.H. Pope Francis, people are scrambling to learn about the many business opportunities that lifting the embargo would bring.

These issues cannot be forgotten while more scrutiny is being called by those who oppose lifting the embargo. In my opinion, Congress would do well in doing away with this fossil-policy from the cold-war. The embargo failed. Cuba has the opportunity to revitalize its infrastructure using cutting edge technology. Advances in medicine and science can be implemented in a way that can improve the lives of Cubans and people around the world, while working to restore basic freedoms. U.S. companies can benefit from Cuba’s medical expertise while providing new partnerships for growth.

It will be necessary for the Cuban exile community in the United States and around the world to think of the path towards reconciliation. The release of political prisoners during Papal visits needs to be monitored by the United Nations. Once the confetti has been cleaned up, and the Pope back in Rome, those political prisoners need to remain free and not be replaced by others. What happened in 1998 during the papal visit then? Lessons learned, perhaps this is the chance to move forward.

In 2005, I had a chance to attend the World Conference on Education for Sustainable Development (ESD) in Havana. There I learned about the Earth Charter Initiative from Guillem Ramis of Spain and Dr. David Suzuki from Canada. The U.S. delegation was not allowed to attend by the US State Department. I became the Japan delegate.

I would like to share and example of how perhaps generations might differ in their attitudes towards Cuba’s reality. My father is Cuban, does not agree with much of the Castro brothers leadership but I did grow up taught to respect Fidel Castro as a master strategist and formidable statesman. My father delivered Fidel Castro’s speech “Frente a Todos” to Cuba from Mexico for publication.

Ernesto “Che” Guevara’s daughter Dr Aleida Guevara visited Okinawa in 2008. Her visit was organized by the Okinawa-Cuba Friendship Association. At that time, I was serving as a co-representative. My father who is Cuban, asked me to pass on to her a message. He later spoke about this in an interview aired in Miami and Cuba.

His message was (shortened : “Aleida,you should dig up your father’s bones in Santa Clara and repatriate them because someday tomorrow, the people of Cuba who are forced to say “Viva El Che,” after the Castro debacle comes to an end, those same Cubans will feed your fathers bones to the dogs.

My heart was not in it. I told my father I did whisper in her ear but did not share with him that I ignored his request and gave her a message of my own.

I had a chance to whisper in Dr. Guevara’s ear: “Your father and my father worked together a long time ago. You and I might think differently but we do need to work together for a better world. “Un mundo mejor es possible (A better world is possible)”

He asked “What was her reaction?” She would not look me in the eye after that. I was hoping for dialogue. Seeds planted?

For true reconciliation, we need to start somewhere. It’s more difficult for many who have suffered persecution, arrest, death of loved ones, torture or forced exile. The circle of revenge needs to stop somewhere as long as justice prevails.

Many still wonder why Henry Kissinger is not on trial, yet he is a Nobel Peace Prize laureate. I welcome you opinions and questions to this post.

In Okinawa, the Okinawa-Cuba Friendship Association, led by Tsuyako Kinjyo (owner of the Sudaka Cafe) held a Cuba Day on September 27th at the Okinawa International Centre of JICA (Japan International Cooperation Agency).