Local artists from Okinawa will gather to Koza Music Town on Oct. 10 for a 2-evening extravaganza of traditional Okinawan Eisa, folk songs and pop music. 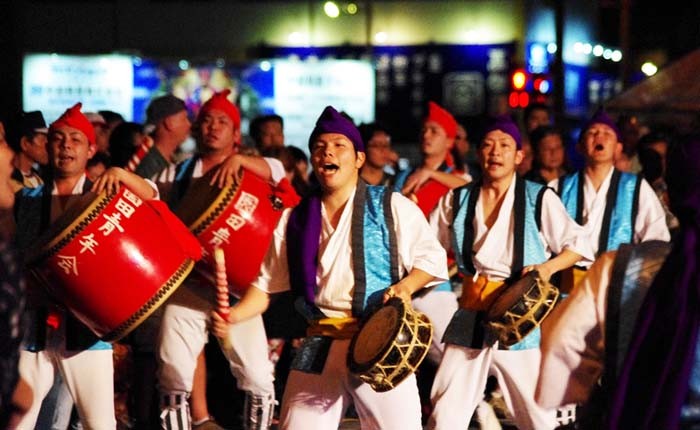 Sonda Eisa is one of the best known Eisa groups on Okinawa that performs in events both on Okinawa and overseas.

Rinken Band, a hugely popular local band known for its style of playing a kind of “Okinawa blue grass” music, Sonda Eisa, a popular Eisa group from Okinawa City that actively performs not only locally on Okinawa but off the island and overseas as well, and Zakimi-Bo, martial arts group with about 500 years of history that will show its practical fighting performance using long sticks are highlighting the event. In addition Okinawan pop and folk singers take to the stage.

Ryukyu music has its roots in the islands, pulling together the power of nature and spirituality of ancestors. The shamanic world is still alive here, and there are rituals of agriculture and fishing, in which people pray for fertility and peace that give their lives the rhythm of Hare and Ke, the unusual and the usual. They are considered the keys to gaining tranquility and a well-grounded life on the island. The Ryukyu interpretation of music brings Ni-Utu, the root music, together to sing songs of joy, reunion and togetherness.

The Ni-utu Umachi concert takes place on Oct. 10 and 11, starting at 5 p.m. on both days. The program closes at 8 p.m. The event venue is on the first floor open café area of the Koza Music Town Sound Market at 1-1-1, Uechi, Okinawa City. Admission to the event is free, and it’s scheduled to go ahead rain or shine.