According to archeological findings in the Ryukyu Islands between 1962 and 1983, the oldest human skeleton on Okinawa was found in the Yamashita Cave. The skeleton that had been a young girl less than ten years old dates back to 32,500 years ago. 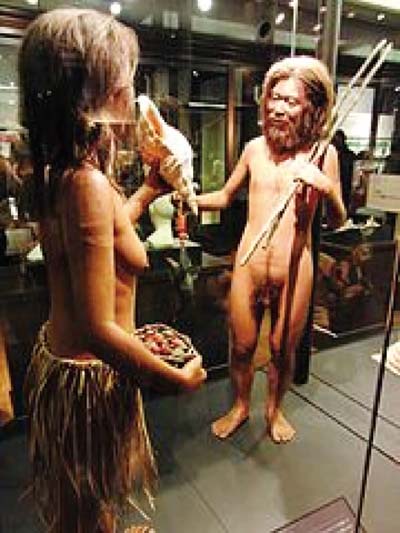 This is what archaeologists think a Minatogawa couple looked like when they walked on Okinawa 18,500 years ago.

These findings show that the major islands of the Ryukyus were already populated between 32,500 and 15,000 years ago. Those people lived in natural caves and engaged in fishing, hunting and food gathering.

They could be the ancestors of the Ryukyuan people, because it’s unthinkable to say they had suddenly disappeared completely from these islands. However, modern Ryukyuans are believed to be an ethnic mixture of indigenous people, Ainu (Jomon), Yayoi invaders from Asian continent, Malays, Chinese, and others. 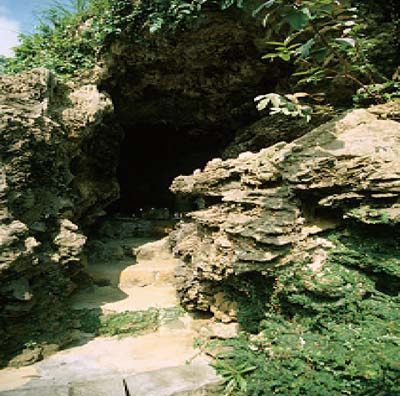 The oldest human bones on Okinawa dating back 32,500 years were discovered in this Yamashita Cave in Naha.

Following is the account from “The Chronological Events of the History of the Ryukyu Islands” by former professor of the University of the Ryukyus, Morishiga Nakayama.

Since around 300 AD, the life style of the island people has gradually shifted from hunting, fishing, and food gathering to agriculture by planting rice, barley, wheat, millet, taro, and such. Many small farm and fishing villages appear. The village chiefs were called Aji who began to emerge around 600 AD. In 605, Emperor Yang of the Sui Dynasty of China sent a mission to the Ryukyus (possibly to submit to China, which might have been rejected). So, in 608~609, Emperor Yang sent his army to ‘invade’ the Ryukyus, but the Ryukyuans fought back and repelled the Chinese invaders.

Upon retreat, the Chinese burnt a castle and kidnapped about 1,000 men and women. Meantime, Japanese envoys, Fujiwara-no Seika, Abe-no Nakamaro, Kibi-no Makibi, and Chinese Monk, Ganjin, on their way back from Tang China to Japan visited Okinawa Island on Nov. 21, 753. They left Okinawa for Japan on Dec. 6.

This gentleman lived 18,500 years ago in a cave in Minatogawa.

At that time, major Aji were controlling minor Aji and constructed castles, which became a symbol of political and economic power. Powerful Aji engaged in international trade with China, Korea, Japan, and the southeast Asian nations. The most powerful Aji who subjugated minor Aji emerged as a King who might have appeared about 750 AD.

Strangely, however, it was not until 1187 that chronicles mentioning the first king appeared. Between 750 and 1187, there is a historical vacuum. About 400 years of Ryukyu history is missing!

According to a legend, the first king of the Ryukyus, Shunten, was a son of Japanese warrior Minamoto-no Tametomo. However, there is no proof that he came to Okinawa while he was fighting a losing war against Taira clan and committed suicide at the age of 33 on Hachijo-jima Island 287 km south of Tokyo.

In 1609, eleven years before Mayflower arrived at Plymouth Port, Satsuma Clan (southernmost domain of feudal Japan) invaded the Ryukyu Kingdom and colonized the Kingdom for 270 years until 1879.

Like Emperor Shi Hwan Ti of Qing China did, Satsuma could have destroyed ‘unfavorable’ historical documents in order to rewrite a new (fictional) history to justify the control over the Ryukyu Kingdom. Therefore, the first king of the Ryukyus had to be a son of a famous Japanese samurai warrior, Minamoto-no Tametomo.

Today, almost nobody believes in this manipulated legendary king as a Tametomo’s son. Meanwhile, historians must make efforts to fill the 400 years of historical gap (vacuum) by gathering pieces of information scattered around the world.