There are several legends regarding young King Sho Toku’s death. One legend is that he was a womanizer. He fell in love with a young priestess called ‘Kunichasa’ on the sacred island of Kudaka, which was the ‘Garden of Eden’ of the Ryukyu Islands. On his way back to Shuri Castle where a coup was taking place, he was thrown into the ocean and died.

Another legend concerning his death is that someone might have poisoned him to death because there was a revolt against him as he had sent his troops to invade and conquer a very small island Kikia-jima off the east coast of Amami Island.

The third version is that King Sho Toku simply died of sickness.

Sho Toku’s death brought about the end of the First Sho Dynasty of Ryukyu Kingdom in 1469. 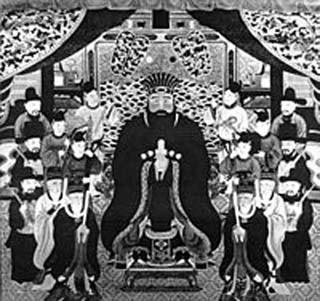 Immediately after King Sho Toku’s death, the king’s treasurer, Kanemaru, escaped and hid himself in a place called Uchima, Nishihara village. Kanemaru originally came from Izena Island to northeast of Okinawa Island. Kanemaru was a very wise and capable man who was trusted by former king Sho Taikyu.

Kanemaru had also been in charge of foreign affairs and foreign trade of the king’s office. Why did Kanemaru have to run away from Shuri Castle to Uchima? There might have been a big trouble regarding why King Sho Toku died, and who should succeed the deceased king. Kanemaru was trusted and supported by the ministers and retainers of the king’s office, therefore, he was called back to Shuri Castle to succeed King Sho Toku.

Kanemaru accepted the offer but decided to take the name of the former King Sho instead of selecting a new royal family name.

When Kanamaru ascended to the throne, he changed his name and reigned as King Sho En. Consequently, Kanemaru became the founder of the Second Sho Dynasty in 1470.

Why did Kanemaru adapt Sho En as his name? He inherited Sho from the former Sho Dynasty. Regarding ‘En,’ his own name was a combination of ‘Kane’ and ‘maru’. ‘Kane’ means money or gold. ‘Maru’ means circle or round, which is pronounced ‘en’ in Chinese. ‘En’ is also related to a round coin. Thus, ‘Kanemaru’ could mean a round ‘Golden Coin,’ which symbolizes wealth and prosperity.

King Sho En cast his coins. He also built Buddhist temples, such as Sogen-ji temple in Naha in order to enshrine the spirits of the successive kings of the Second Sho Dynasty. He also built the Ten’no-ji temple in Shuri, and Fukuryu-ji temple in Urasoe for the safety and prosperity of the Kingdom. The dogma of Buddhism, however, was not taught to the general public. 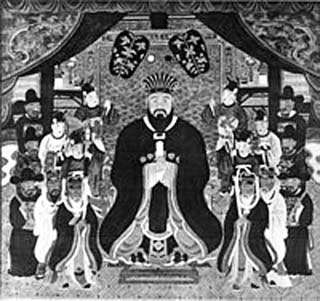 The most outstanding king of the Second Sho Dynasty was King Sho Shin (1477–1526), who was the son of King Sho En. At the age of 12, Sho Shin became the third king of the Second Sho Dynasty when his uncle gave up the throne. During his 50-year reign, he made outstanding accomplishments, including confiscating and banning weapons in order to establish a peaceful kingdom in 1478.

He also Centralized the kingdom by forcing local Aji and their families to live in the capital city Shuri in order to prevent possible rebellions in the country side.

He had the Enkaku-ji temple built to enshrine the spirits of the ancestors in 1492, and constructed the Benzaiten shrine to house the Benzaiten (goddess of music holding a lute) statue and sutra, present from the Korean King in 1502.

He built stone-paved highways, roads, bridges, seaports, and beautified the kingdom by planting trees and flowers, promoted general aesthetic and performing arts as well as arts and crafts, and established theocracy by supporting High Priestess’s Office that appointed the local priestesses.

He encouraged to send as many tribute ships as possible to Ming China and promoted so-called triangle trade with Japan, Korea, China, and Southeast Asian nations, which brought lots of wealth to the kingdom. As a result, the people of the Second Sho Dynasty enjoyed peace, prosperity, and longevity.

Sho Shin Banned the custom of ‘junshi’ (殉死?) (following the lord in death, sometimes translated as “suicide through fidelity”), which refers to retainers committing seppuku or ritual suicide in Japan upon the death of their lord. The custom originated in the ancient China, and was believed to allow to serve one’s master in the world after death.

King Sho Shin died at the age of 61 in 1526. His son Sho Iku succeeded him. Japanese monks came to Ryukyu Kingdom in order to propagate Buddhism, and Japanese and Chinese studies became popular.

In 1579, the Emperor of Ming China called Ryukyu Kingdom “a Nation of Courtesy” that had been framed and placed on the gate of Shuri Castle. The gate is known as the “Gate of Courtesy” or “Shurei-no Mon” that welcomes all the visitors to Shuri Castle.

The Japanese Buddhist monks and Shinto priests as well as Japanese merchants might have acted as spies by establishing close relationship with the successive kings and their officials. While closing the door of the nation, Tokugawa Shogunate of Japan learned what was going on in the outside world through Ryukyu Kingdom. Eleven years before the Mayflower reached Plymouth port, the southernmost clan of Japan, Satsuma sent 3,000 samurai troops armed with shotguns to invade the peaceful kingdom in 1609. What was happening to the Ryukyu Kingdom will continue in the next issue.

Registration for the enrollment to the course “A History and Culture of the Ryukyus”: call OLC office at 098-943-1852 or e-mail: OLC@okilc.org