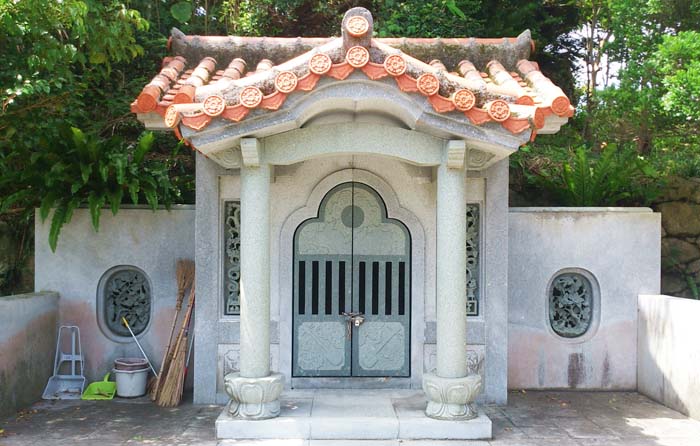 Akainko, the first on Okinawa to write music for sanshin, is enshrined in Yomitan.

Friday, Mar. 4, is known as the Sanshin Day, and everyone knows that sanshin is the instrument of choice for Okinawan music, but where did that music originally come from?

According to an Okinawan legend, the fist person to create and write music exclusively for sanshin was someone called Akainko. “Aka” means color “red” and “inko” is ‘dog’s child,” thus the name literally means “Red dog’s child.” So how this man got such an unusual name?

There are variations of the legend, and it’s even questionable if someone with that name actually existed, while others say that an Okinawan traveling singer of ballads with that name lived from late 1400’s to early 1500’s. 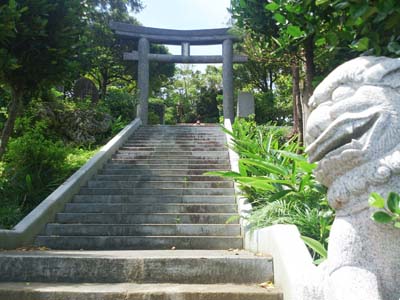 Stairs lead to a torii gate and entrance to Akainko’s shrine.

In any care according to one story, people in the Nenami (Sobe) area that is now Yomitan Village suffered from a severe drought, crops were failing and people almost ran out of drinking water, and were in danger of perishing. One day a red color stray dog led a young woman, who had taken pity on the dog and fed it, to a cave that had a spring sprouting cool fresh water. This discovery saved the village.

The woman whose name was Chira took the dog in her home as her pet. She was also famous in the area for her beauty, and mane men asked to marry her, and she chose one. One of the jilted suitors killed the man she had chosen, and started to spread around a rumor that she had become pregnant with a child of her dog. In fact, she actually was waiting for a child for the man who was murdered.

The rumor started spreading around and made it impossible for her to continue living in Yomitan, and she finally escaped to Tsuken Island, where she gave birth to a baby boy. After the boy was born her parents came to see her and her baby, but Chira was too ashamed to meet them, and committed suicide.

Her parents were very sad, and took the boy back to Yomitan, where people started to call him Akainko.

One day, upon hearing the sound of rain Akainko got an idea, and made a sanshin with a wooden body and using horsetail hair for strings. He then accompanied his singing with the sanshin, and thus became the first person to fuse an instrument to vocal singing.

While traveling around the island, he took religious, work and leisure songs and ballads from various locations and created a melody to fit the words, the first person to do so.

Later, the ship from Seragaki sank, but the ship from Chatan proved to be fast. Suspecting that Akainko had put a curse on their ship, the Seragaki carpenters got angry, and went after him in order to kill him. They followed Akainko, and took his life in Yomitan.

Akainko now has a shrine on that spot in Yomitan near the Torii Station main gate. The legend is famous on Okinawa, and many musicians go to the shrine to pray for a success in music. Even people who just love listening to music visit the shrine to pray.