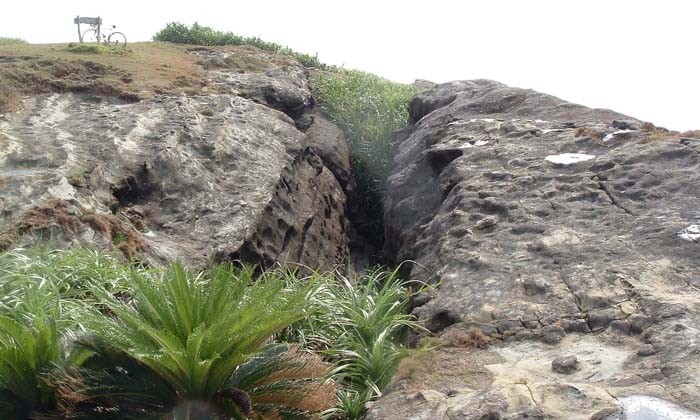 Kuburabari ravine on Yonaguni Island was used to control population.

Over 130 years the people of Ryukyu Kingdom enjoyed their peace, prosperity, and longevity while the Japanese had been suffering from long civil wars, poverty, despair, and hopelessness.

After the Battle of Sekigahara between Toyotomi samurais of Osaka and Tokugawa samurais of Edo (today’s Tokyo) in 1603 Japan’s long weary civil wars had finally come to an end with Tokugawa’s victory. Satsuma clan fought the loosing war for Toyotomi, severely suffering from economic strain. In order to restore the war-torn clan, Satsuma decided to invade the rich Ryukyu Kingdom. 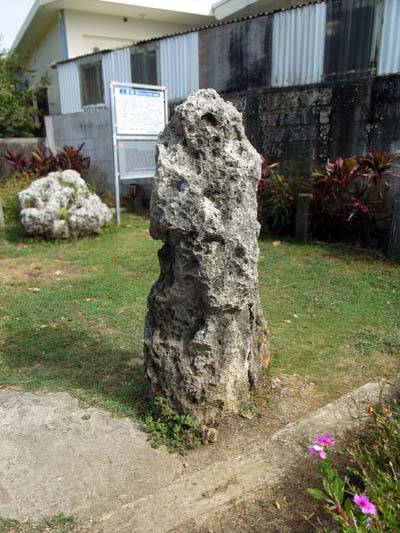 People who were taller than this stone on Miyako Island had to pay head tax.

Satsuma clan was based in the southernmost part of Kyushu, Japan. They built 100 war ships to carry 3,000 samurai invaders armed with shotguns and swords. Eleven years before the Mayflower arrived at Plymouth Port, the Satsuma battle ships left Yamagawa Port on Feb. 6, 1609.

King Sho Nei had sent a peace mission, which invasion force commander Kabayama of Satsuma ignored, and conquered Amami Island on Mar. 8. King Sho Nei dispatched another peace mission to Nakijin in Motobu, northwest of Okinawa, which was again rejected.

Satsuma troops took over the vacant Nakijin Castle setting fire on it and killing thousands of residents as they advanced to capital Shuri. On Apr. 1, 1609, Satsuma soldiers rushed into Shuri Castle. King Sho Nei was arrested and the Kingdom’s treasure and important official documents were stolen. Now, Ryukyu Kingdom became under Satsuma’s control.

King Sho Nei and his ministers were taken to Satsuma and then to Edo. Satsuma prepared an unequal 15-article treaty that was imposed to the King’s office, as it described new laws and regulations that the colonized people of Ryukyu Kingdom had to obey and follow. A Ryukyu Kingdom minister named Jana refused to sign such unfair and disgraceful treaty, and he was unceremoniously killed.

Ryukyu’s Golden Age had suddenly turned into the Dark Age under Satsuma colonization. The ancestors of the island people suffered 270 long years of Satsuma control paying heavy taxes imposed by the Satsuma rulers.

All the Kingdom’s people between 15 and 50 years of age had to pay taxes to Satsuma invaders. Miyako and Yaeyama people had to pay so-called “jinto-zei” (head tax). In 1637, poll tax stones of 143 cm in height were erected on these islands, and all residents, male and female alike whose heights reached the top of the stone had to pay the tax.

Satsuma used the “divide-and-rule” policy in Ryukyu Kingdom. They brainwashed the Amami Oshima islanders by saying that Satsuma came to liberate them from the ‘evil’ King of Shuri, and that the ‘evil’ King had ordered people of Miyako and Yaeyama to pay the head tax although it had been Satsuma’s idea.

Satsuma ruled Ryukyu Kingdom by instigating hatred between the King at Capital Shuri and people of outer islands, the side effects of which still remain to some extent today. Satsuma’s lie and sham became clear when the head tax didn’t disappear in 1879 when Ryukyu Kingdom came to an end but continued until it was abolished in 1903 after a strong petition from people.

On Yonaguni Island, Satsuma introduced sad and inhumane methods of population control. One method was “Tonguda,” the rice paddy located at the center of the island. Periodically, all islanders between ages 15 and 50 had to run to “Tonguda” as soon as they heard a signal. Physically handicapped, sick, and people who couldn’t get to the paddy in time were beheaded.

Another method was killing pregnant women who were lined up on one side of the “Kuburabari” ravine that is 3~5m wide and 7~8m deep. They were ordered to jump the ravine to the other side. Most of them died falling into the ravine. Almost all of those who miraculously succeeded to jump across suffered a miscarriage. By reducing population, and mouths to feed, Satsuma were able to get maximum taxes that were collected usually in rice from the colonized and enslaved people of Yonaguni Island. Sadly, no memorials have been erected there to date yet. Japanese have ignored and discarded these evil acts as the simple island myths and legends.

Some of the reasons why will be discussed in the next topic: “Meiji Japan’s Invasion of Ryukyu Kingdom”. What is going to happen to the kingless Ryukyuan people under Japan’s assimilation policies implemented in the Ryukyus during the 19th century?