Satsuma, the southernmost clan of feudal Japan in Kyushu, invaded independent Ryukyu Kingdom in 1609 and colonized her for 270 years until 1879.

Satsuma controlled the kingdom by means of indirect rule making the kings and his ministers as puppets. Satsuma gained enormous profits and wealth from the Ryukyu Kingdom by monopolizing foreign trade and domestic economies, which enabled Satsuma to play a major role to overthrow and abolish ‘han’ (Tokugawa’s clans) and to establish the system of ‘ken’ (today’s prefectures) of the Meiji government in 1868. The Meiji government sent 400 armed soldiers to invade the Ryukyu Kingdom, and King Sho Tai, his family, and his ministers and officers were taken to Tokyo where they were confined until they passed away. 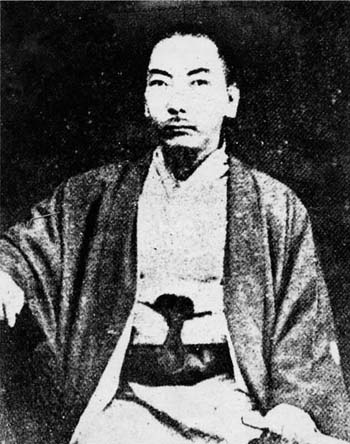 King Sho Tai was the last king of the Ryukyu Kingdom.

To begin with, the Meiji government unilaterally abolished the Ryukyu Kingdom and established the Okinawa prefectural government in Naha that became the new capital. The Shuri Castle in the old capital became vacant since King Sho Tai and his ministers had been taken to Tokyo. The name “Okinawa” had to be used to abolish and destroy “Ryukyu”.

Okinawans’ new leader had to be the Emperor of Japan, no longer King Sho Tai. The Emperor had to be honored and worshipped. The Okinawans had to obey Japan’s orders; governors were appointed and sent to Okinawa from Tokyo that became Japan’s new capital.

Major industries came from Japan to control the local economies. Japanese took away the lands of the Ryukyuan people just as they did in Hokkaido from the Ainu people. Most of these Japanese were from Satsuma (today’s Kagoshima), who unlawfully continued to collect “jinto-zei” (head tax) from the people of Miyako and Yaeyama Islands until 1903. To do that officials lied to the island people that “jinto-zei” had been the king’s order. Although the kingdom was abolished by Meiji Japan in 1879, the “jinto-zei” continued 24 more years. Officials used the “jinto-zei” as a means to ‘divide and rule’ and to implant suspicion and hatred between people on the outer islands and the King at capital Shuri.

Third, the Japanese Imperial education was introduced. Elementary, middle, and later, teacher-training high schools were created to train teachers to make sure the Ryukyuan people assimilated into the Japanese society. Japanese regarded the Ryukyuan languages as “hogen” (a local dialect of Japan) just as Korean, Taiwanese, and the languages of the Japanese colonies in the Pacific islands although they all were foreign languages. Ryukyuan languages had to be destroyed and replaced by Japanese. Therefore, the students on the Ryukyu Islands had to carry so-called ‘Hogen-fuda’ (disgraceful dialect speaker’s tag or card) around their neck as a punishment if they spoke their mother tongues. Almost all students ended up wearing the tag because they couldn’t speak Japanese.

So, for the Ryukyu people, going to school was not delightful at all but very fearful. Inferiority complex was implanted to the minds and hearts of island children. No universities or colleges were built by the Japanese, because the “Ryukyu people wouldn’t need college education”. All they needed was the basic skills of reading, writing, and speaking Japanese so that they could follow the Japanese orders, and the aim was to make Ryukyu people followers, not leaders.

The Emperor of Japan was taught to be a living god who should be worshiped. They were taught that it is most honorable to die for the Emperor. During the battle of Okinawa, hundreds of island people committed mass suicide in at least ten locations.

Admiral Minoru Ota left his last words written on the wall of a room in the underground naval headquarters in Oroku, Naha, that state, “It is honorable to be born as a human and die under the flag of our Great Lord/Emperor”.

Ultra-nationalistic patriotism was taught to school children as well as the general public, so as to sacrifice oneself willingly at any time at any place. Ryukyu people were brainwashed to deny themselves by giving up their native languages as well as their own lives for Imperial Japan. This was the purpose of educational assimilation. 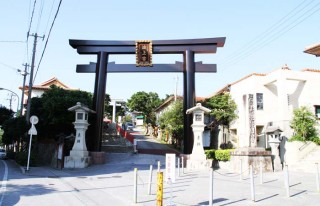 As part of the assimilation program, old indigenous ‘utaki’ worship sites were destroyed, and Japanese-style shrines, like Naminoue Temple, were built instead.

Last, the Japanese religious assimilation program was introduced to the Ryukyu Islands. “Kokka Shinto” (National Shinto Religion) was used as a means of brainwashing and controlling the island people. Traditional Ryukyuan religious worship sites called “utaki” were destroyed one after another to construct Japanese Torii and Shinto shrines. Today, even on the very small, uninhabited islands, Shinto Torii gates can be found.

Before a young man was sent to a battlefront, he was purified by a Shinto priest. Then, everyone shouted in unison “Banzai!” three times so that he would bravely die for Japan in the battle. As a result of Japanese strong and persistent assimilation policies, most Ryukyuans had been brainwashed, hypnotized, and mind-controlled to think as being the last Japanese.

Ryukyu people’s native languages have been taken away and their rich history has been buried and ignored. To this day most Ryukyuans have been suffering from BHM syndrome, in which most feel inferior to Japanese, have lost their identity, self-determination, and spirit of independence.