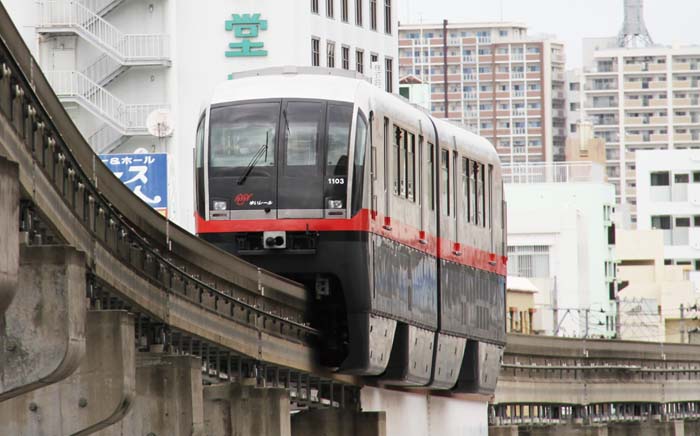 The two-car trains of Yui Rail run on their 12.9-kilometer route at 10-minute intervals carrying more than 31,000 passengers a day.

Okinawa was for a long time known as the only prefecture in Japan that did no have a rail mass transportation system, but on Aug. 10th, 2003, a 12.9–kilometer-long monorail track went into operation.

The Okinawa Urban Monorail, usually known as “Yui Rail”, winding from Naha Airport through the city downtown up to Shuri, was created in order to alleviate the extremely congested traffic conditions in Naha City. The Yui Rail trains are two-coach cars that carry 165 passengers. Along its route is has a total of 15 stations. It travels on its track at an average 28km/hour. 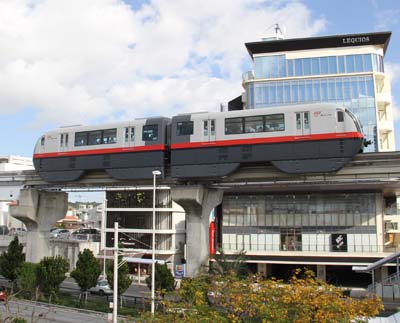 Yui Rail is very popular among tourists as it presents a good view of Naha from its high vantage point.

Since Yui Rail runs on tracks well above the street level it isn’t affected by any traffic issues, and is thus very useful for regular daily commutes to school or work. It also relieves congestion during big events in Naha, such as the Naha Tug of War or Okinawa Industry Fair, as visitors to the events are able to park their cars away from the event venues and hop on the Yui Rail train instead.

Over the years, the Yui Rail has become much appreciated by both locals and tourists alike as witnessed by the fact that it has constantly exceeded its initial planned passenger count of 31,000 passengers per day.

The name “Yui Rail” is derived from Okinawa dialect “Yuima-ru” that is the one of most famous and loved Okinawan word and means “mutual cooperation”. The name was adapted in hopes that Yui Rail would support Okinawan people, connect communities and bond people together.

The basic design of the train features red lines along the sides of the cars with images of the Shuri Castle icon, and a bird or hook shape pattern on the seat covers, which show Okinawan traditional wear “Kasuri” pattern.

Jingles playing inside the train are different for each station, and are all Okinawan traditional folk songs, like “Tinsagu-nu Hana,” “Asatoya Yunta” to name a couple. Each station has individual characteristics, featuring images and symbols of surrounding area traditional culture and notable sites. Each station has also its own “Shisaa” to guard against evil spirits and bad luck. They are displayed at each station and each with a different expression, as they watch out for the safety of running trains and passengers. Tickets of Yui Rail are also unique featuring Shuri Castle and Kasuri designs.

People traveling on the trains have a good outside view of Naha downtown from the trains’ high position on the monorail, and just looking for particular details provides a lot of fun too while riding.

The Yui Rail Exhibition Pavilion is located inside of the Okinawa Urban Monorail Co. offices near Naha Airport. There one can watch a movie of how the Yui Rail developed, and there are also an exhibition of the light rail network that run on Okinawa before it was destroyed in the World War.

Currently, the work on Yui Rail extension project from Shuri through Urasoe City is going on and is scheduled for completion by spring 2019, when the northern final station will be in Uranishi, Uraose City, near the Nishihaea Interchange of Okinawa Expressway. The extension is expected to enhance the access to the airport from the northern parts of the island.

Japan Update will start a series introducing the individual Yui Rail stations. To ride on the Yui Rail is fun. Add to that watching the view from the vantage point of the rail cars, and walking around in the neighborhoods of each station, and one can easily plan a memorable daylong trip to discover new details of our Okinawa, create good memories and make new friends with locals.

The Yui Rail Exhibition Pavilion near Naha Airport is open 09:30 – 16:30 with last entry at 16:00 on weekdays. It is closed on Sat, Sun, Japanese holidays and at the end of the year through New Year holidays. The entrance to the facility is free.