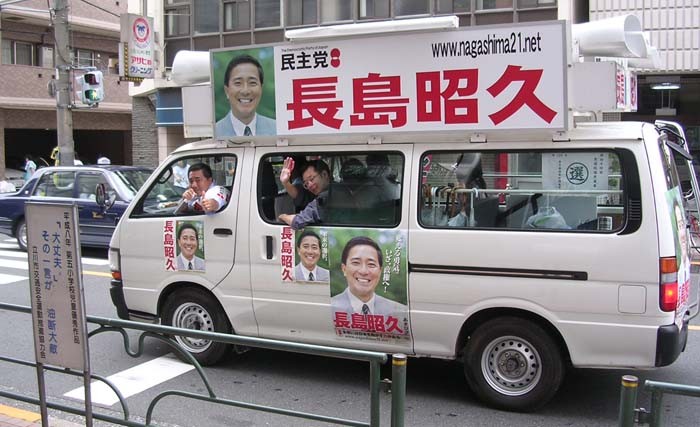 An election van with candidate’s pictures pasted all over and loudspeakers on both ends will be a common sight this summer.

This summer, an election will be held for the Okinawa Prefecture Assembly so I would advise that you begin to brace yourself now for the onslaught of propaganda noise that will soon be consuming our air space. The pandemonium projected from a deafening barrage of trucks and vans equipped with megaphones blaring slogans and promises from each candidate with the hopes that people will be convinced to vote for the candidate.

As for most English speaking residents living in Okinawa, the election is really just noise because, if you are not a Japanese citizen you are not eligible to vote even if you have a resident status. It may not be a surprise that many of younger Okinawans share a similar sentiment in regards to the elections. There is an inclination towards apathy amongst the younger voters rather than that of activity towards revolutionary reforms inspired by the likes of Ché Guevara, and many blame on the politics of prefectural level process for that situation.

Our local prefectural candidates must follow specific guidelines that differ from many other countries. One main difference is that a party representative may not solicit door to door at residential homes or call directly to cell phones to solicit for their party. For this reason, two of the ways that a candidate can reach their voters are either, by standing on a street corner waving their hand in the air and speaking passionately into a megaphone or by driving around neighborhoods boorishly canvassing their messages through sonorously abrasive megaphones.

Last election, I found the megaphones so annoying that I began researching noise pollution laws in Japan, only to discover that the cacophony of election time megaphones are exempt from noise pollution laws, which means that legally, they can speak, shout or sing to their hearts content through their ear-piercing megaphones within a certain times during the day. I wanted to start my own Ché Guevara style revolution to ban these political megaphone candidates from entering my neighborhood. Personally, the last thing that I want to hear once finally arriving home after a long day’s work and snuggling my head into my pillow for a revitalizing post-work siesta are boisterous megaphones chanting almost incomprehensible political jargon.

Many people will agree that the candidates antics are very noisy, annoying and not really what they are interested in hearing. Nonetheless, they often feel that their complaints would fall on deaf ears if they were to try to contest the process. And quite literally, they would be falling on deaf ears, as most of the active supporters, or city and prefectural administrators, who might have the clout to pass an anti-noise bylaw, are senior citizens holding high-ranking, high-paying positions. These folks do not tend to stay contemporary with the exponentially changing computer trends and Internet know-how. Internet advertisements for campaigns are basically nonexistent due to the fact that the voter base is predominantly seniors who relate better to the dizzying blitz of the megaphone than the connectivity of a swipe screen.

Regardless, I have recently fostered a growing respect for political candidates who run for office positions as I have begun to notice that they are most likely some of the hardest working, most passionate people I have ever met. The dilemma is that they too have boundaries in terms of the resource options made available to them during their condensed campaign period. Candidates are often out in the community taking part in selfless acts such as community clean ups, attendance of school sports days, fund raisers and local business openers. Whether their attendance may or may not have ulterior motives becomes less of a concern when residents can step back and experience the positive effects of their dedication to the community, and how that dedication can become contagious and lead to great things.

It’s been said that ‘it takes a village to raise a child” when really, I would extend that to state ‘it takes a village working together to develop a healthy community where we all want to live, raise our children, dream and grow old,” and this is where our candidates thrive.