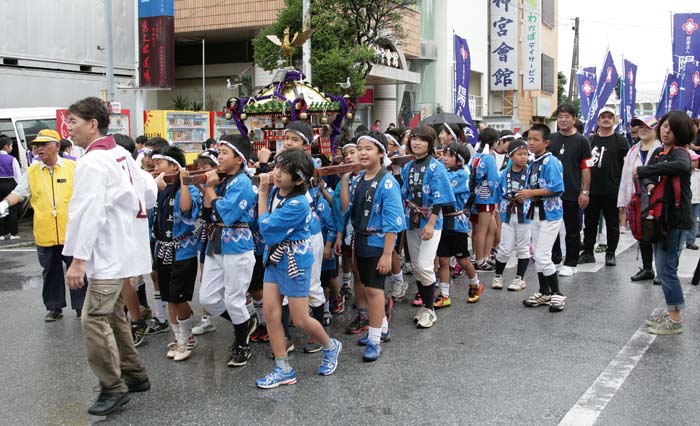 The highlight of the festival is a parade of ‘Mikoshi’ shrine from Naminoue to Kumoji.

Naminoue Shrine, known as the largest and most popular shrine in Naha, was also one of the official shrines in the Ryukyu Kingdom. The shrine also hosts an annual spring festival, known as ‘Nanminsai’ that takes place this weekend at Naminoue Shrine Park, the adjacent Naminoue beach and on the open square in from of Palette Kumoji. 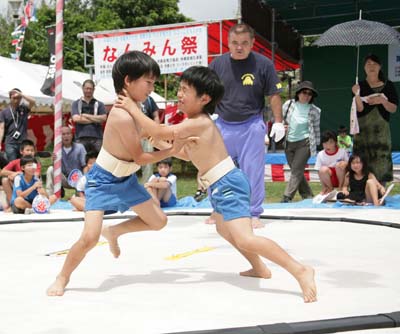 Nanminsai features an Okinawan-style Sumo contest for both adult and junior grapplers.

The Nanmin Festival brings together locals and tourists for three days from Friday through Sunday. Admission to the festival is free.

The festival opens at 18:00 on Friday with Yoimiya Festival at the main shrine grounds. On Saturday, the events concentrate on Asahigaoka Park next to Naminoue Beach. The day begins at 13:00 with Children’s Sumo Contest and workshop of making traditional Okinawan children’s toys. A tea ceremony and Noh Song performance follow and the day ends with Taiko drum shows starting at 18:00. 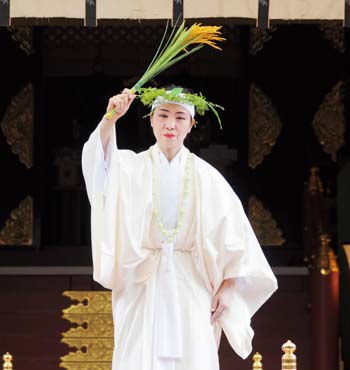 Religious ceremonies at Naminoue Shrine are an important part of the festival.

On Sunday, a festive event called ‘Reutai’ is held at the shrine starting at 10:00. A portable shrine called ‘mikoshi’ is carried from Naminoue Shrine to the open square in front of Palette Kumoji starting at 11:30. Mikoshi is something that is not seen often on Okinawa.

In the afternoon events continue at the park and Naminoue Beach, where the Okinawan sumo tournament starts at 14:00 at the park and a tug-of-war on the beach at the same time.

Okinawan traditional dance is performed on a stage in front of the Naminoue Shrine at 16:30, and the Japan Air Self Defense Force Southwestern Air Band rendition takes place at 5 p.m. at Asahigaoka Park.

A singing contest and Asahigaoka Park starting at 18:00 ends the day.