Most pets are cute and adorable, unfortunately all of their owners are not. 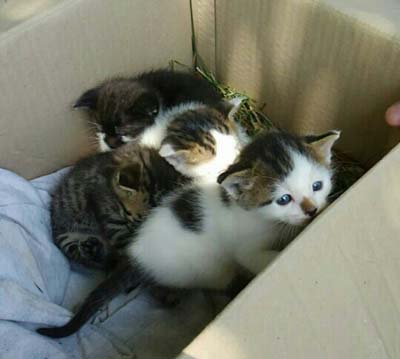 Many unwanted kittens end up in a box tossed roadside.

The group is working island-wide to address the problem of stray cats and dogs being a nuisance and soiling the environment. They see three main reasons for the problem, and has found that the most effective way to combat it in a humane way is the so-called “Trap – Neuter – Return” or TNR campaigns.

The group says “Owners selfishly abandon many stray dogs and cats on Okinawa. Usually, they are abandoned in life-changing circumstances, such as divorce, hospitalization, moving, among the most common. Abandoned pets, if not neutered, then reproduce.”

Some owners let non-neutered dogs and cats go outside and roam without restraint, and also selfishly abandon unwanted puppies and kittens.

The group believes that there’s a solution. “There are other lesser reasons, but as the reasons above are human caused, they could be solved. That is why we work toward limiting the number of stray cats through Trap – Neuter – Return (TNR) operations.” 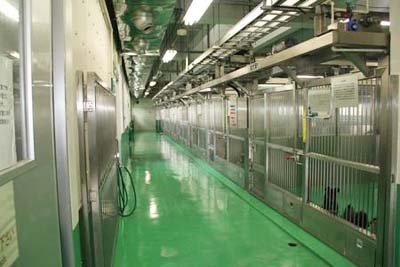 All too many abandoned pets are taken to Okinawa Animal Control Center to be put down.

Trapping stray cats, neutering and returning them to the area they live, takes time, but is ultimately effective at holding constant and eventually decreasing the number of stray cats, while respecting their lives. Neutering 80% of stray cats in one area at one time, is the goal of most large TNR operations, but it’s not an end. Because there will be some cats missed during a large TNR operation, and inevitably, more owners will abandon more cats, smaller TNR efforts must be ongoing.

The group thinks the most important key to solving this problem is to neuter pets whose owners don’t want them to reproduce. We are working to influence owners toward this goal. Before acquiring a pet, owners should plan responsible care giving actions in case of life events like deployments, hospitalization, and moving.

“We think people should not acquire any pet, if they lack confidence that they can care for the pet throughout its life,” a spokesman for the group says. 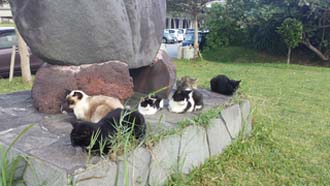 Stray cats taking an afternoon nap at a park.

Caring people in many places, including Sunabe, put out cat food for the strays. Most people just put some food on the ground and leave. Unfortunately, this can lead to unsanitary conditions, since any leftover food invites insects such as ants, flies and roaches. It also attracts mice. In rural areas, the mice attract snakes, including habu. Also, unsightly stains from cat food remain.

Residents in the area blame the cats and become cruel to these innocent animals. It is suggested that those who are feeding outdoor cats here and there use plates and bowls. These are more easily cleaned and the cats would enjoy their food even more.

Another problem at Sunabe Seawall is many dog owners do not pick up their dog’s droppings while walking their dogs. And some owners, although they pick the droppings up, throw them into the ocean, or leave them by the side of the street. This is an inappropriate lack of manners.

Pet owner should think of ways you can help solve our problem of stray dogs and cats.