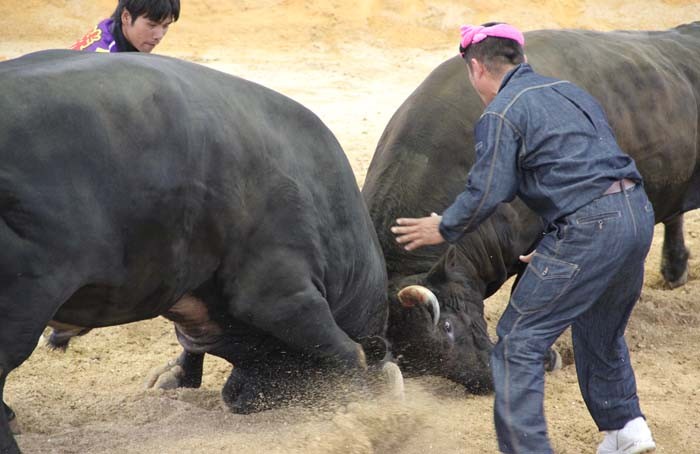 Powerful bulls weighing up to 1,000 kgs and even more give the contest their all, but nobody hardly ever is hurt.

June 19 is the Father’s Day, and Ishikawa Multipurpose Dome in Uruma City has a bit different and exotic entertainment to offer on that day.

The dome is the venue of the largest Okinawan-style bullfighting tournament of the year, as the best fighting bulls from Okinawa and Tokunoshima gave each other. Tokunoshima is an island north of Okinawa in Kagoshima Prefecture where bullfighting is as popular as in Okinawa. 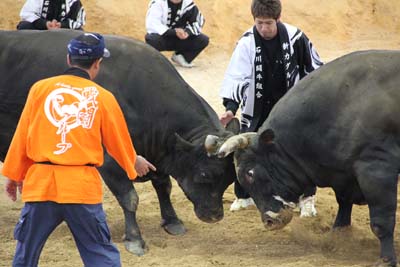 Handlers of the fighting bulls encourage their beasts every way they can but are forbidden to touch them.

20 bulls are representing both islands one marked with red and the other white will face each other in 10 matches. The bulls participating in the bouts are divided in ranks, the same way as in sumo, but the fighters are even heavier. The largest bull in the tournament comes from Tokunoshima and weighs 1,050 kg (2,314lbs).

Bullfights on Okinawa are not what most people imagine when they hear the word. Instead, they literally have a bull going against another, as opposed to a bull trying his horns against a matador with a sword. Humans have only a cheering-up role as the bull handlers, who shout, goad, guide and encourage their respective animals in their fight by shouting, running and jumping around. No physical touching of the animals is allowed. 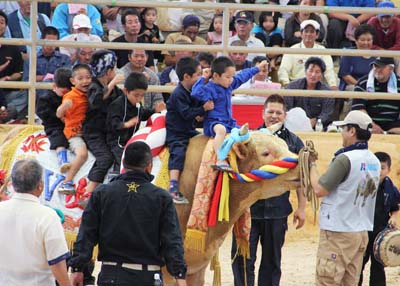 Children enjoy a ride on the champion.

It’s important to note that bullfights in Okinawa do not end in bloodshed. Instead, both bulls walk away at the end of the bout. In a matter of fact, if a bull is gouged or otherwise injured during the fight, the match is immediately stopped.

How to tell which one won or lost is easy; the bull that runs away is the loser.

The Fathers’ Day tournament exceptionally takes place in the evening instead of the usual afternoon. The first match starts at 18:30 at the Ishikawa Multipurpose Dome in Uruma City, Okinawa’s most prominent bullfighting arena.  Admission is ¥3,000 for men and ¥2,000 for women.

Organizers say that taking video of the bouts is not allowed without permission as the organizers have prepared videos for sale. However, you can take photos with your phone.